Kagiso Rabada is the highest wicket-taker in Indian Premier League (IPL) 2020 with 23 wickets from 12 matches. Mohammed Shami has picked 20 wickets for Kings XI Punjab in as many matches.

Kagiso Rabada is the highest wicket-taker in Indian Premier League (IPL) 2020 with 23 wickets from 12 matches at an average of 16.86 and strike rate of 12.4. His exploits include a four-wicket haul against the Royal Challengers Bangalore (RCB) in Dubai. According to most commentators and pundits, he is the best bowler of the tournament.

Mohammed Shami has picked 20 wickets for Kings XI Punjab in as many matches. Despite a lower wicket-tally and a higher bowling average (19.75) and strike rate (14) with no four-wicket hauls and even a higher economy rate (8.46 compared to 8.13 of Rabada), it is the Indian speedster who has had a higher impact in IPL 2020.

Let us find out why?

The answer lies in the quality of Shami’s wickets and the timing and context of his performances. Out of Shami’s 20 wickets in the tournament, as many as 16 (80%) are batsmen in the top 5 batting positions - this suggests that he is taking wickets of the main opposition batsmen, the big guns and the wickets that can change the outcome of the match. 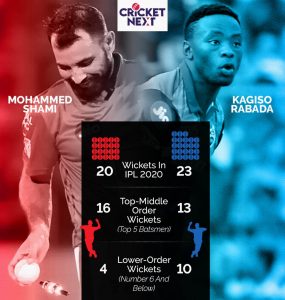 As compared to this, only 13 of the 23 wickets (56.52%) Rabada has taken in the tournament are of the top 5 batsmen. This is a huge and significant difference in the quality of wickets taken by the two bowlers. In addition, Shami’s 4 lower-order dismissals include the wickets of AB de Villiers, Hardik Pandya, Shimron Hetmyer - all at number 6 - and Abhishek Sharma (at number 7) - the first three are destructive match changers and as valuable as any batsman in any top 5! Abhishek Sharma is also no mug with the bat and a dangerous lower order batsman. Thus, all the 20 wickets Shami has taken in the tournament have been significant and crucial to improving the probability of his team winning the match - this is quite an astonishing feat!

Shami saw the back of Suryakumar Yadav for a duck in the first match against MI in Dubai and then returned to dismiss Hardik Pandya for 8 just before the latter could cut loose at the death. He again displayed his class and prowess against the Capitals at the death when he dismissed the destructive Marcus Stoinis and Shimron Hetmyer in the 18th and 20th overs of the match for 9 and 10 respectively - not allowing them to cause any damage and restricting the opposition to a par total.

Shami got the prized scalps of the two best batsmen of the last 20 years - Virat Kohli and AB de Villiers in the same over at the death against RCB. AB, capable of changing the complexion of the match in a matter of deliveries, as he has shown on numerous occasions in this tournament itself, was dismissed for just 2.

Shami got rid of Rohit Sharma for 70 in the 17th over against MI in Abu Dhabi - just when the Indian superstar was looking to cut loose. He wreaked havoc on the DC top order in Dubai as he dislodged Prithvi Shaw and Hetymer for 5 and 7 within the power-play reducing the opposition to 13 for 3 in the 4th over. He then returned to get the wicket of DC skipper, Shreyas Iyer just when the batsman was looking to change gear and accelerate.

Also Read: This Is What Virender Sehwag Has To Say On Rohit Sharma’s Injury

It is quite remarkable and pretty astonishing to see the number of high quality big ticket players Shami has dismissed cheaply in the tournament - when they were just getting their eye in and had scored in the range of 0 and 10. The timing and quality of his wickets created pressure on the opposition team and often tilted the balance of the match drastically in KXIP’s favour - thus, Shami’s impact with the ball is much higher than Rabada’s in the tournament despite the latter bagging three more wickets!