IPL 2021: An In-Form Quinton de Kock Is Crucial To MI's Fortunes In The Tournament 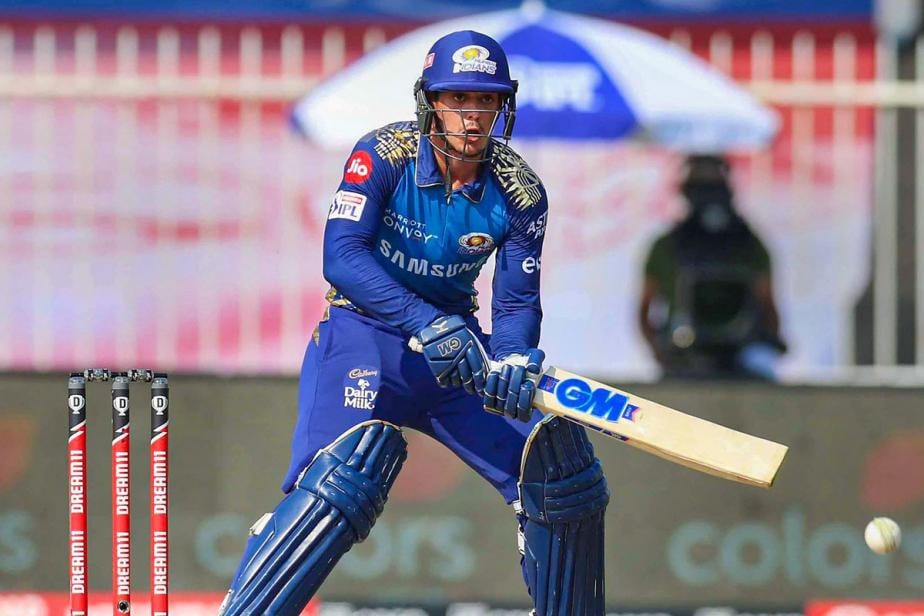 Quinton de Kock is the highest scorer (combined) for Mumbai Indians in the last two editions of the IPL - 2019 and 2020 - the seasons in which they lifted successive titles.

Mumbai Indians would be breathing a big sigh of relief. After losing two matches in a row they came back and recorded a comprehensive seven-wicket win against the Rajasthan Royals in the national capital. The difference between today and their fortunes in the two previous matches was the form of their South African opener – Quinton de Kock. The left-hander failed to get going against the Capitals and Punjab Kings but was back at his usual best against the Royals in Delhi – guiding and anchoring the chase when his team needed him to step up and make his performance count.

De Kock went after the bowling in the powerplay. With skipper Rohit Sharma taking his time to settle in, the southpaw had to play the role of the aggressor as the Mumbai Indians could not afford to let the required rate soar above 10 – given the indifferent form of their middle and lower-middle order, especially Kieron Pollard and Hardik Pandya, this would have not been an easy task. Thus, the impetus and the volume, both had to come from the top-order and it was crucial that De Kock stepped up to the challenge.

He hammered 29 off 19 deliveries in the powerplay. His effort included two fours and as many sixes. MI had reached 49 for the loss of Rohit Sharma’s wicket at the end of the mandatory overs. The impetus provided by De Kock meant that the side had kept abreast with the run rate. De Kock continued in the same vein with Suryakumar Yadav. The pair put together 34 off just 20 deliveries with both the batsmen going after the bowling. Having built a platform De Kock changed gears from aggressor to anchor at the fall of Yadav’s wicket.

He understood the value of his presence right till the end and changed strategy half-way into the MI innings. The other batsmen – the likes of Krunal Pandya, Pollard and Hardik would attack from the other end while De Kock would play anchor in the chase. The strategy paid off brilliantly.

De Kock and Krunal Pandya added 63 off 46 deliveries. Krunal – the aggressor blasted a cameo 39 off 26 balls while De Kock 2.0 – the anchor – registered 17 off 18 balls. The pattern continued with Pollard at the crease too. The West Indian hammered 16 off 8 balls while De Kock contributed 6 off 3 as MI raced to a thumping seven-wicket win with nine deliveries to spare.

De Kock remained unbeaten on 70 off 50 deliveries. He had quite splendidly combined playing aggressor and accumulator at two different junctures during the chase and took MI to a much needed victory. Even though he slowed down in the second half, the initial acceleration meant that the overall strike rate of his innings was 140.
De Kock is crucial to the chances of Mumbai Indians in this tournament. The team has won the two matches in which he has scored and lost two others in which he has been dismissed in single digits.

De Kock was the highest scorer for MI in 2019 and aggregated 529 runs in 16 matches at a strike rate of 132.91. Four of the 8 highest scores by MI in the season were produced by the South African batsman. He was very consistent with 11 20-plus scores in the competition.

It was a similar story in IPL 2020 as well. De Kock again aggregated above 500 runs in the season – 503 runs in 16 matches. He scored at a higher tempo in this edition at a strike rate of 140.5. MI won 5 of the 6 matches in which De Kock recorded a 40-plus score – an indicator of how significant his performances were for the team.

What he achieved in the last two editions of the IPL is no mean achievement – to put it into perspective, De Kock had an aggregate of above 1000 runs and was the highest (combined) scorer for Mumbai Indians in IPL 2019 and IPL 2020 – the two editions in which they won back to back titles to become the most successful team in the tournament’s history.
De Kock did not have a great start this season but has come good at the opportune time for the Mumbai Indians just when it seemed that their batting would lead the five-time champions down this year. His team’s chances in the tournament will be directly proportional to how he performs at the top of the order for the remainder of the season.
​