MS Dhoni is one of the greatest cricketers to have played the game. He is amongst the 10 highest scorers of all-time and boasts of one of the highest batting averages in the competition's history. He has also been one of the most successful captains leading CSK to victory in three seasons.

MS Dhoni is one of the greatest cricketers to have played the game. A great ODI batsman, one of India’s leading captains who took the country to three wins in major world tournaments and also to the pinnacle in Test cricket. Dhoni has also been a phenomenal player in the most prestigious T20 league in the world – the Indian Premier League (IPL).

He is amongst the 10 highest scorers of all-time and boasts of one of the highest batting averages in the competition’s history. He has also been one of the most successful captains leading CSK to victory in three seasons.

Dhoni will again lead the Super Kings in the 14th edition of the IPL starting from the 9th of April. There will be extra pressure on MSD as the franchise had their worst season last year in the UAE. We look back at Dhoni – the outstanding batsman, the astute captain and the fine wicket-keeper over the years in the IPL.

1. 51 NOT OUT (20 BALLS) Vs Mumbai Indians, Elimination Final, Bengaluru, 2012
It was the Clash of the Titans – Mumbai Indians were up against Chennai Super Kings (CSK) in the Elimination Final in IPL 2012 in Bengaluru. Mumbai Indians were favourites as they had beaten CSK twice in the group stages. Dhoni came out to bat at 95 for 3 in the 14th over and blasted 51 off just 20 deliveries hammering 7 fours and a couple of sixes. It was his knock which was the difference between a par score of 160 and a match-winning total of in excess of 180. CSK raced to 187 for the loss of five wickets and went on to register a comprehensive 38-run win over Mumbai Indians and with it advanced to the Qualifying Match. 2. 66 NOT OUT (33 BALLS) Vs Kolkata Knight Riders, Kolkata, 2010
CSK were off to a sluggish start and in trouble at 55 for 3 in the 10th over against KKR at the Eden Gardens in 2010. Dhoni walked in and hammered an unbeaten 66 off just 33 deliveries – his knock included 6 fours and 3 towering sixes. The highlight of the knock was MSD taking apart Shane Bond – one of the fastest bowlers in the world – for 14 runs in the 19th over. Dhoni displayed his entire range of shots including the famous helicopter shot! CSK posted 164 and went on to win by 55 runs.

3. 70 NOT OUT (34 BALLS) Vs Royal Challengers Bangalore, Bengaluru, 2018
It was the big Cauvery battle at the Chinnaswamy Stadium in Bengaluru. Chasing a massive 207 for 5, CSK were in trouble at 74 for 4 after 9 overs when their captain MSD joined Ambati Rayudu at the crease. The pair put together a match-winning 100 stand off just 56 deliveries – the partnership was dominated by Dhoni who scored 55 off 30 balls.

CSK needed 30 of the last two overs. Dhoni unleashed his destructive best and carved Siraj and Corey Anderson for a couple of maximums and along with Dwayne Bravo took CSK to a stunning win with two deliveries to spare.

4. 3 Catches & 1 Stumping Vs RCB, Chennai, 2013
Dhoni has been one of the best wicket-keepers in the history of the IPL taking sharp catches and effecting unbelievable stumpings behind the stumps. One of his best performances with the gloves came against arch-rivals RCB in Chennai in 2013. Dhoni took three catches including a low diving catch to dismiss Ravi Rampaul off the bowling of Bravo. He was also brilliant against the spinners and got Mayank Agarwal stumped off the bowling of R Ashwin. 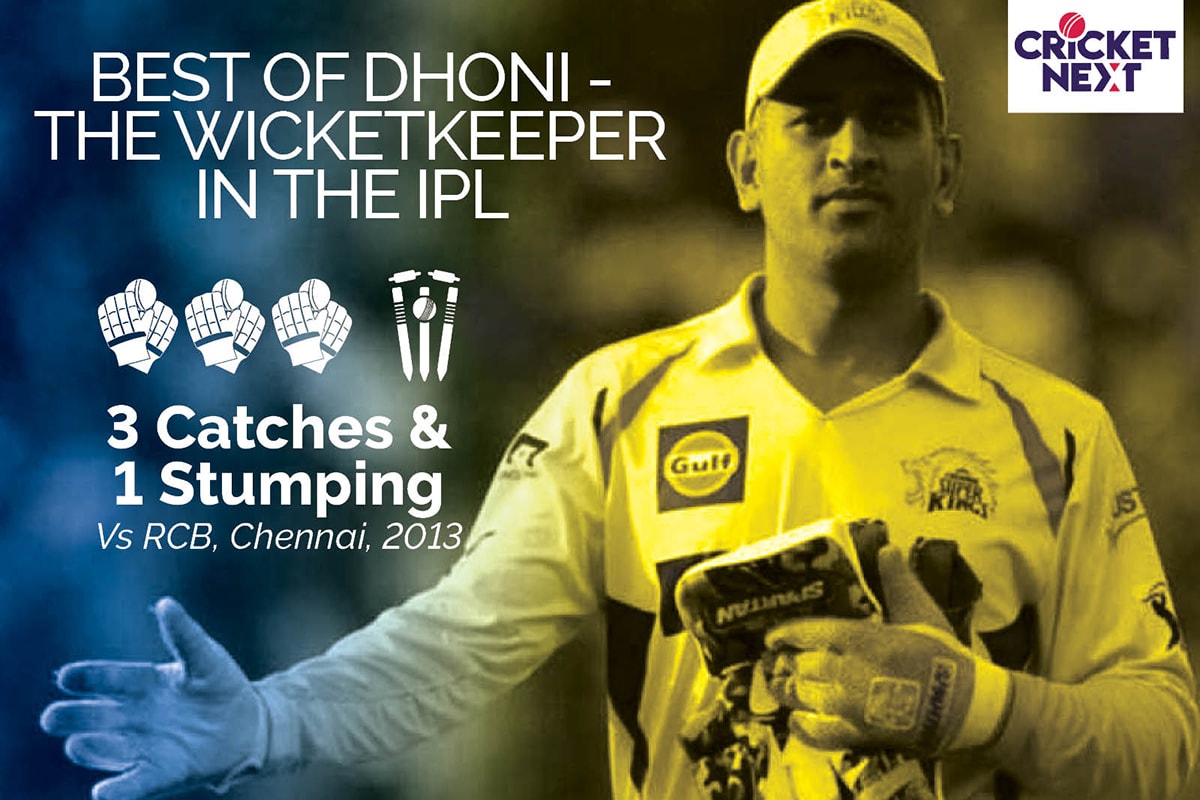 5. Title Wins in 2010, 2011 and 2018
MS Dhoni has been one of the most successful captains in the history of the IPL. He took CSK to a title win in 2010, 2011 and 2018. The victory in 2018 was particularly spectacular as CSK came back into the tournament after serving a ban of two years due to betting and other charges. The team’s morale and self-pride had taken a big hit and they needed to produce something special in the season.

CSK had overcome a more fancied Mumbai Indians in their own den in 2010 and RCB at home in 2011 to win successive IPL trophies.

6. Astute Captaincy And Strategy Vs Mumbai Indians, Abu Dhabi, 2020
Dhoni has been one of the sharpest cricketing minds in the IPL and known for his proactive field placings and bowling changes and innovative captaincy. In the series opener against Mumbai Indians at Abu Dhabi in 2020. Dhoni drafted in the experienced leg spinner Piyush Chawla in the starting XI for the very first match of the season. It was Chawla’s first season with CSK. He returned as the most restrictive bowler of the match conceding just 21 runs off his 4 overs while also picking the big wicket of Rohit Sharma.

Then in the chase he sent in Jadeja and Sam Curran ahead of him to basically negate Krunal Pandya and Rahul Chahar who would be easier to negotiate by the left-handers with the ball coming in. 7. Dhoni – Fine Tactics To Win IPL 2018
Dhoni – the captain made some master moves on CSK’s return to the IPL in 2018. He sent in Ambati Rayudu to open the innings – the veteran batsman was CSK’s highest scorer of the season and the fourth highest overall scoring big runs at a very high strike rate. Rayudu aggregated 602 runs in 16 innings at a strike rate touching 150 and his exploits included one hundred and 3 fifties.

Dhoni then unravelled a trump card for CSK in the powerplay that season in the form of Deepak Chahar. The right-arm fast medium bowler was phenomenal in the first six overs picking wickets and also keeping the opposition batsmen in check.

Dhoni also started with Lungi Ngidi ahead of Imrah Tahir at the start of the season. He recognised Ngidi’s wicket-taking prowess and his faith was repaid as the South African quick picked up heaps of wickets for CSK in the first half the season.