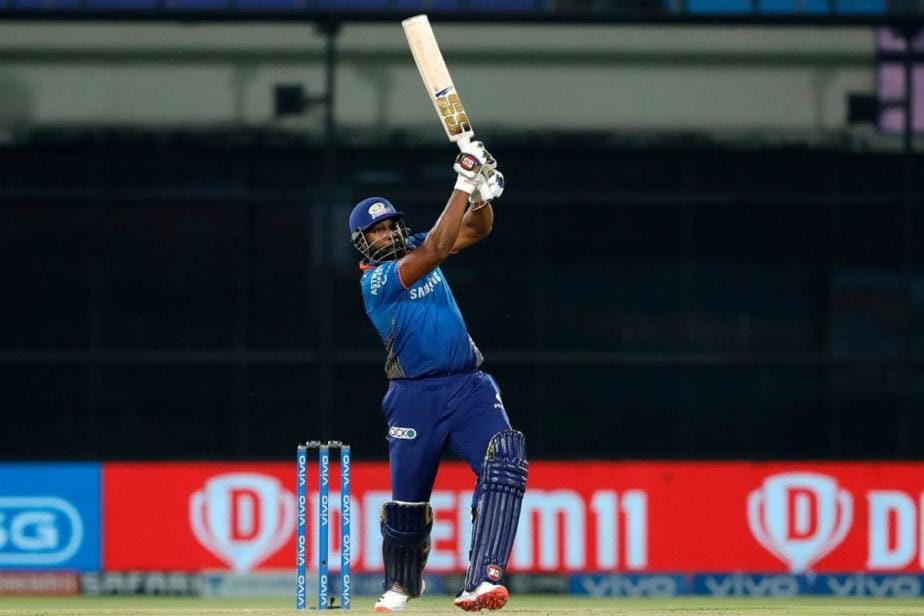 Kieron Pollard hammered a brilliant unbeaten 87 off just 34 deliveries to take MI to a thrilling last-ball win against CSK in Delhi on Saturday. Pollard had a poor start to the season but may now be peaking just at the right time for the Mumbai Indians.

This is why he is regarded as one of the most destructive batsmen in international cricket. This is why he is feared even when not at his best. And this is why his franchise had the belief even when he seemed out of form. Kieron Pollard produced one of the best batting performances in IPL history blasting an unbeaten match-winning 87 off just 34 deliveries taking the Mumbai Indians to a much needed win off the last ball of the match against arch-rivals Chennai Super Kings in Delhi.

Pollard came out to bat in the 10th over at the fall of Quinton de Kock’s wicket – the required rate had soared to almost 14. It is one thing to score at that high a rate at the death and completely another to maintain that tempo for half the duration of a team’s innings. Pollard played himself in taking five deliveries to get his eye in before launching the onslaught – by that time the required rate had touched 16 per over.

Pollard hammered Ravindra Jadeja for three sixes in the 13th over before smashing Lungi Ngidi for another couple in the 14th. His strength was his brute force and he backed himself to clear the straight boundary aiming at the ‘V’ between cover and mid-wicket. He bludgeoned Shardul Thakur for a six and three boundaries in the 15th over to register a record 17-ball fifty – the fastest in IPL 2021 and the joint-fastest ever for the Mumbai Indians equaling the record held by him, Hardik Pandya and Ishan Kishan.

MI still needed 48 off the last 3 overs and Pollard obliged even as wickets fell around him. 16 off the last over and he took Ngidi for a 4, 4 and 6 off the first five deliveries scampering for two off the final ball to hand MI one of the greatest wins in IPL history. It was the second-highest successful chase ever in the IPL. MI had scored a staggering 138 runs in the final 10 overs. It was the third-highest number of runs scored in the last 10 overs of a successful T20 chase in history! Such was the enormity of what Pollard had achieved for MI on the night!

Pollard had a terrible start to IPL 2021 and his poor form with the bat (along with Hardik Pandya’s) was one of the major reasons for the indifferent start of MI in the tournament. He was dismissed for 7 and 5 in the first couple of matches and although gave glimpses of his destructive prowess against SRH (35 off 22 balls) he was still not at his devastating best. He was dismissed for 2 against the Capitals and could not provide the flourish at the death against the Punjab Kings scoring just 16 off 12 deliveries.

IPL 2021: ‘We Just Could Not Shut Down Pollard,’ Says CSK Coach Stephen Fleming

Pollard had played a leading role with the bat in MI’s successive title wins in 2019 and 2020. He had aggregated 268 runs in the UAE last year at a stunning strike rate of 191.42 – the highest in the tournament. Four of the 8 highest strike rate innings for MI in 2020 were produced by Pollard including an incredible unbeaten 60 off 24 deliveries against RCB.

Pollard was instrumental in his team’s title win in 2019 as well. He scored 279 runs in 14 innings at a strike rate of 156.74 in the season which included three high strike rate impact innings. His best of the edition was a blistering 83 off 31 deliveries helping MI chase a stiff 198-run target set by the Punjab Kings in Mumbai.

Pollard is the X-Factor for Mumbai Indians in the middle order and as long as he is at the crease no target is impossible for the franchise – as he displayed against the Chennai Super Kings on Saturday.

If MI are to go all the way in 2021 then the West Indian will have to consistently produce the goods batting in the lower middle order.