This year's auction was no different either. While the likes of New Zealand's Kyle Jamieson caught eye in the international arena, India's Mohammed Azharuddeen and Australia's Riley Meredith impressed in domestic leagues to earn IPL contracts for the 2021 season. 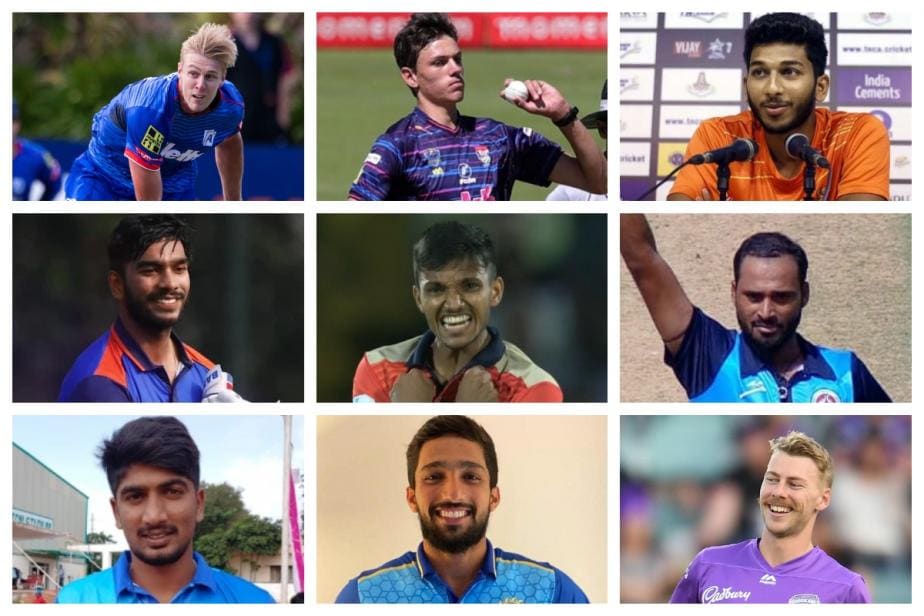 In every year’s Indian Premier League (IPL), new players come in on the back of strong domestic performances. Some stand out, some fail while some don’t get a chance to showcase their talents at all.

Same happens with international players across the globe. Some catch the eye on the back of strong performances in the international stage while others perform regularly in their domestic leagues and get picked from the auction.

This year’s auction was no different either. While the likes of New Zealand’s Kyle Jamieson caught eye in the international arena, India’s Mohammed Azharuddeen and Australia’s Riley Meredith impressed in domestic leagues to earn IPL contracts for the 2021 season.

This year’s IPL is approaching fast with the opening game set to be played between Mumbai Indians and Royal Challengers Bangalore on April 9 and as the season comes near, we take a look at this year’s newcomers in each team from the auction.

Kyle Jamieson: The tall imposing all-rounder from New Zealand was bought for a whopping price of INR 15 crore by Virat Kohli’s side to provide some much needed balance to the side. Jamieson with a height of 6’7′ bowls at a fair pace and can hit the ball far. He has already played 18 international games across all formats, picking up 44 wickets and scoring 292 runs in the process.

Mohammed Azharuddeen: The swashbuckling opening batsman from Kerala was bought by RCB at a relatively low price of INR 20 lakh despite him announcing himself with a 137* off just 54 balls against Mumbai for Kerala in the Syed Mushtaq Ali Trophy (SMAT). A wicketkeeper-batsman by trade, he has till now played 24 T20s, scoring 451 runs at an average of 22.55

Rajat Patidar: A batsman by trade, Patidar was picked up by RCB at his base price of INR 20 lakh as well. He impressed in the SMAT with a 51-ball 96 against Goa for Madhya Pradesh. Till now, Patidar has 22 T20s and scored 699 runs at an average of 34.95.

Suyash Prabhudessai: Suyash Prabhudessai was also bought at his base price of INR 20 lakh by RCB. He, much like Patidar in the same match, almost took Goa to victory against Madhya Pradesh with a 22-ball 48* but failed to do so as MP won by 6 runs in the end. He’s a medium pace bowler and right-hand batsman and till now in 17 T20s, he has scored 357 runs at an average of 32.45 and picked up one wicket.

Arjun Tendulkar: Arjun Tendulkar is perhaps the most high-profile name in this list despite some international experience in the mix. Tendulkar Jr. went almost unsold before MI picked him up in the dying moments at his base price. Arjun is an all-rounder by trade and bowls and bats left-handed. Till now, he has played two T20s for Mumbai, scoring three runs and picking up two wickets.

Yudhvir Charak: Yudhvir Charak was another base price acquisition by MI. He is a right-arm medium fast bowler from Hyderabad and so far has played six T20s, scoring 24 runs and picking up three wickets.

Marco Jansen: South Africa’s Marco Jansen is 6ft 8in tall and can boast about beating Virat Kohli outside his off-stump thrice back in 2018 when India toured South Africa. He was picked up by MI for INR 20 lakh and is a left-arm fast bowler and can also hold his own with the bat at the end. He’s a player MI have been keen on for a while and so far, he has played 10 T20s, scoring 71 runs and picked up 6 wickets.

Jhye Richardson: The Australian speedster left a lasting impact during Australia’s last tour of India and has continued to do so when representing the country as well as the Big Bash League for the Perth Scorchers. Jhye came in with a base price of INR 1.5 crore and an intense bidding war fetched him almost 10 times that as he was sold for INR 14 crore to Punjab. A right-arm pacer primarily, Jhye has represented Australia 29 times across all the formats and picked up 43 wickets.

Riley Meredith: Another Australian went to Punjab and bagged big bucks. The left-arm Hobart Hurricanes pacer went for INR 8 crore while his base price was INR 40 lakh. Meredith is fast as it can get and he has tormented batsmen Down Under with this lethal weapon. He has so far played three T20Is for Australia and has picked up four wickets.

Shahrukh Khan: The Tamil Nadu batter was hot property going into the auction and coming out of it, he bagged a contract of INR 5.25 crore from Punjab. His performances in the SMAT were really good and he has the ability to finish an innings with some big hitting at will. Shahrukh is a right-hand middle-order batsman and has played 31 T20s so far, scoring 293 runs and picking up 2 wickets.

Utkarsh Singh: Utkarsh Singh is an all-rounder from Jharkhand and was picked up at his base price of INR 20 lakh by Punjab. Like most, Utkarsh put up some eye-catching performances in the SMAT. He has so far smashed 238 runs from T20s and has also picked up 19 wickets.

Venkatesh Iyer: Venkatesh Iyer is a left-hand batsman and a right-arm bowler and has been in sensational form lately. He was picked up by KKR at his base price of INR 20 lakh after some serious hitting in the SMAT for Madhya Pradesh. Not only that, he recently smashed 198 off 146 balls in the Vijay Hazare Trophy against Punjab. So far, he has scored 724 runs in 38 T20sat an average of 36.20 and also managed to take 21 wickets.

Vaibhav Arora: He is not new to the IPL as he had had a stint with Kings XI before as net bowler just but this is the first time, Vaibhav has been selected in a squad. He was bought for INR 20 lakh — his base price by KKR. Arora, who recently picked up a hat-trick against Bengal in the Vijay Hazare Trophy, has played six T20s so far and picked up 10 wickets.

Chetan Sakariya: Chetan Sakariya is a left-arm medium fast bowler and impressed with a 5/11 in the SMAT for Saurashtra. That caught the eye of many teams and he went for INR 1.2 crore to RR following a bidding war which saw his price rise from INR 20 lakh to INR 1.2 crore. He has played 16 T20s and picked up 28 wickets so far.

Kuldip Yadav: Kuldip Yadav is a bowler and so far played only one List A game in his career and was bought for INR 20 lakh by RR.

Ripal Patel: Ripal Patel is a right-hand batsman from Gujarat and was bought at his base price of INR 20 lakh by DC. So far, Ripal has played 11 T20s and scored 191 runs at an average of 31.83.

Lukman Meiwala: Lukman Meriwala is a left-arm pacer and was bagged by DC for INR 20 lakh. He led Baroda to victory with 3/28 against Punjab in the SMAT earlier this year. Meriwala has so far played 44 T20s and picked up 72 wickets.

K Bhagath Varma: Hyderabad’s K Bhagath Varma is a right-arm off-break bowler and was picked up by CSK at his base price of INR 20 lakh.

C Hari Nishaanth: C Hari Nishaanth plays for Tamil Nadu and impressed in the SMAT with a 92* off 64 against Jharkhand. He was also picked up by CSK at his base price of INR 20 lakh. He is an opening batsman and has scored 393 runs from 19 T20s at an average of 26.20.

M Harisankar Reddy: M Harisankar Reddy is a right-arm medium pacer who plays for Andhra Pradesh and went at his base price of INR 20 lakh to CSK in the 2021 auction. In 13 T20s so far, he has grabbed 19 wickets.