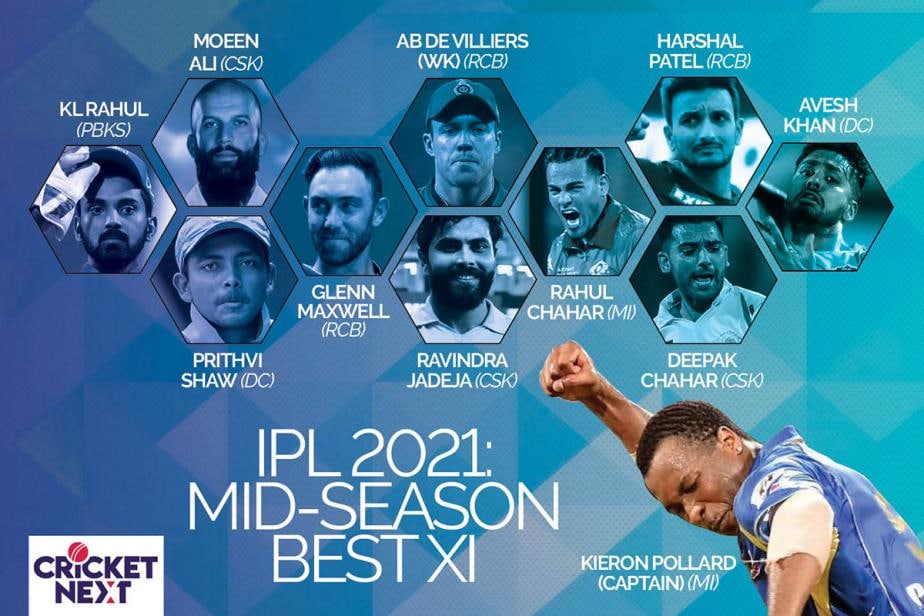 The mid-season Best XI comprises of three players each from CSK and RCB and two each from DC and MI - not surprisingly, these are the four top-ranked teams in the tournament.

It is exactly half-way into what has been a different edition of the IPL. Different because of the times it is being staged in when the Covid-19 pandemic continues to surge and cause havoc across the country. Despite the empty stands there have been some sensational performances over the course of the last three and a half weeks.

We analyse these performances and form a Best XI of the Tournament thus far. We consider aggregate runs and wicket tallies but also take into consideration the context of the performance in terms of situation of the match, contribution to victory, pressure, quality of the opposition attack amongst other things while selecting the XI. For batsmen we look at specific impact at different batting positions as an important parameter.

The team has to comprise 7 Indians and 4 foreign players thus some big overseas names might miss out in order to maintain that balance.

This is the toughest selection as there have been four outstanding performances at the top of the order so far in IPL 2021.

Faf du Plessis has been the star with the bat and the Mr Consistent for CSK producing match-defining performances at the top of the order. He has an aggregate of 320 runs in 7 matches at a strike rate of 145.45 with 4 fifties in the competition. He has registered a 30-plus score in every match since being dismissed for a duck in CSK’s season opener.

An unbeaten 95 off 60 deliveries against KKR and 50 off 28 deliveries against the Mumbai Indians have been his standout innings in the competition. The South African has played the pivotal role with the bat in completely changing the fortunes of CSK this year.

The other strong contender is Shikhar Dhawan who started 2021 playing the aggressor but has slowed down letting Prithvi Shaw take over the mantle. As such, Dhawan has had a lesser impact in DC’s wins in the last couple of matches.

Jos Buttler’s name was also considered courtesy his stunning hundred against the Sunrisers in Delhi but he has not been very consistent at the top of the order for the Royals.

Keeping in mind their overall impact for their team and the balance of the final XI, it is Prithvi Shaw and KL Rahul who make it as the opening combination.

KL Rahul has continued to be the run-machine for the Punjab Kings and is currently the holder of the Orange Cap (after 7 matches for each team). He has been very consistent with 4 fifties. Rahul has switched from playing aggressor to anchor through the season – sometimes he has been forced to do so due to the team’s dependency on him. He has produced two outstanding knocks in the tournament – 91 off 50 balls against the Royals and another 91, this time unbeaten off 57 deliveries against the RCB – significantly, both resulted in a win for the Punjab Kings.

Prithvi Shaw has continued from where he broke all records in the 2021 Vijay Hazare Trophy and has blasted 269 runs in 7 innings at a strike rate of 165.03. He has produced three high impact innings – 72 off 38 balls against CSK, 53 off 39 balls against SRH and 82 off 41 against KKR – significantly all resulted in a win for the Capitals.

Moeen Ali unarguably selects himself at number three. The England all-rounder has produced cameos which have given CSK the impetus at the top of the order. He has an aggregate of 206 runs in 6 matches at a high strike rate of 157.25. 36 off 24 balls against the Capitals, 46 off 31 against Punjab Kings, 25 off 12 against KKR and 58 off 36 against MI – Ali has helped CSK continue the momentum given by the openers easing the pressure on the middle order. He has also chipped in with his off-spinners picking 5 wickets and being very economical giving away just 6.16 runs per over.

A change in jersey for Glenn Maxwell has worked wonders for his form with the bat in the IPL. He has produced three match-defining performances for RCB giving them a head start at the beginning of the tournament. 39 off 28 deliveries, 59 off 41 deliveries and 78 off 49 deliveries – Maxwell has been the X-factor for RCB in the middle order in this edition.

There is just one contender for the number 5 slot and his name is ABD! De Villiers has been the playmaker for RCB in the middle order and produced three match-winning performances with the bat – 48 off 27 balls against MI, 75 off 42 against the Capitals and 76 off 34 against the Knight Riders – he has a strike rate of 164.28 in the tournament and that is what separates him from the others.

There are a number of players who could be considered for number 6 and 7. Sam Curran, Chris Morris and Krunal Pandya have given solid performances with the bat and ball in the competition. But after what transpired on Saturday night, it would be almost blasphemy not to include Kieron Pollard in the XI. An unbeaten match-winning 87 off just 34 deliveries taking the Mumbai Indians to a sensational win off the last ball of the match against arch-rivals Chennai Super Kings in Delhi – Pollard produced what was one of the greatest exhibitions of power-hitting ever witnessed in the IPL. MI knocked down a record 138 in the final 10 overs of their chase.

Pollard started the tournament on a poor note but gave glimpses of his prowess with 35 off 22 balls against the Sunrisers. He took it to another level against CSK.

Pollard has also been fairly restrictive with the ball going for only 7.53 per over.

Ravindra Jadeja is the other choice who fits in perfectly at number 7. Jadeja has excelled in his new avatar of ‘finisher’ for CSK (and India) – a role he assumed last season and has continued in the same vein in this edition too. His standout innings with the bat – a monstrous unbeaten 62 off 28 deliveries came against RCB in Mumbai. Jadeja hammered Harshal Patel for 37 in the 20th over of the innings! The all-rounder has also picked 6 wickets and been very restrictive conceding just 6.7 runs per over.

There is a toss up between Rashid Khan and Rahul Chahar in the battle of the leg spinners. Rashid has been at his restrictive best once again in the tournament. He has been the Mr Consistent for SRH in the middle overs. Rashid has picked 9 wickets in 6 matches at an economy rate of just 6.16 which is quite outstanding for an attacking leg spinner.

Rahul Chahar has bagged 11 wickets from 7 matches at a very impressive economy rate of 7.21. Chahar ran through the top order of KKR changing the course of the match in his four-over spell. He then returned with 3-19 in 4 overs, again all middle-order wickets, in another defining performance against the Sunrisers. Chahar’s potency with the ball in the middle overs tilts the balance in his favour.

Harshal Patel selects himself on the sheer volume of wickets he has taken in the tournament. He is the leading wicket-taker with 17 dismissals in 7 matches at a stunning strike rate of 9.8. His standout performance came against the Mumbai Indians when he returned with 5-27 in 4 overs.

The second seamer’s slot goes to the mighty impressive Avesh Khan of the Delhi Capitals. Avesh has bagged 13 wickets in 7 matches at a strike rate of 12 and economy rate of 7.38. He has stepped into the role of the leading pacer for the Capitals with Kagiso Rabada not at his best in the tournament. Avesh has been very consistent and picked a wicket in every match this season. Also 12 of his 13 wickets have been of the top-middle order opposition batsmen – an indication of the quality of wickets he has taken in the competition.

Deepak Chahar also makes it to the XI on the bank of a couple of match-defining performances for CSK. The seamer ran through the top and middle order of the Punjab Kings (4-13) reducing them to 26 for 5 in Mumbai before devastating the KKR line-up in a match-winning spell of 4-19 in 4 overs.

So, this is the final XI mid-way into the tournament:

The team comprises three players each from CSK and RCB, two each from MI and DC, and one from the Punjab Kings – not surprisingly these are the top 5 teams in the competition.