Indian cricketer Prithvi Shaw is rumoured to be dating actress Prachi Singh. The two of them are quite active on Instagram and have been frequently commenting on each other’s post. (Photo: Instagram)

Prachi Singh and Prithvi Shaw have been rumored to be dating for a while now, with the former showering support for her rumored boyfriend whenever he’s playing. Thursday was no different, as the Delhi Capitals side defeated Kolkata Knight Riders in a by seven-wickets thanks to a stunning assault from Shaw at the top. The 25-year-old actress took to Instagram to post a series of stories in congratulations for ‘Man of the Match’ Shaw, who’s blistering 82 off 4 set the stage for a facile win in Ahmedabad.

Prachi first posted an image of Shaw at the presentation ceremony after the match, where he was awarded ‘Man of the Match’ for his match-winning effort with the bat. She captioned the photo, ‘I’m so proud of you!’ 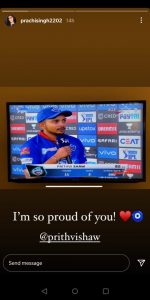 The next image was slightly cheekier, as the actress then posted a series of Shaw holding his various spoils, asking if he needed a suitcase to help pack all of them up. Although neither of the two have confirmed their relationship status to the public, their constant interactions on social media have created enough fodder for the rumor mill.

Meanwhile, the DC opener continues his resurgence from a poor Australian tour and abysmal IPL 2020 proving why he’s so highly rated in Indian cricket circle. On Thursday, he became the first player in IPL history to hit six boundaries in the first over.

Currently, DC are at a comfortable second position on the points table, below three-time winners CSK and ahead of third-placed Royal Challengers Bangalore.

Shaw will be in action against Punjab Kings on Sunday.