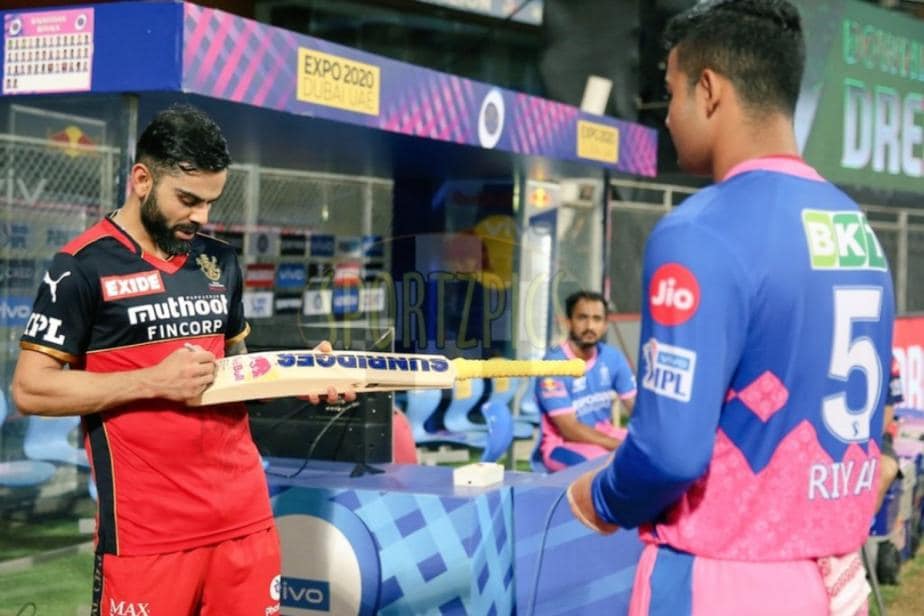 Virat Kohli's gesture is being praised by fans on social media.

The Indian Premier League (IPL) has always been about promoting young talent from across the country as they get an opportunity to rub shoulders with the best players in the world. The tournament also acts as a catalyst where experienced players often give inputs to the budding cricketers.

It also provides a chance to several youngsters to meet their cricketing heroes. On Friday it was the turn of Rajasthan Royals’ talented Riyan Parag as his side took on Royal Challengers Bangalore in an IPL 2021 match.

While RCB won the game comfortably against RR, Parag among others got a chance to have a chat with Virat Kohli after the match. The RCB skipper not only shared his wisdom with the 19-year-old, but also made his night memorable by gifting him a signed bat.

One user said it is a “Fan-boy moment” for the youngster. Another wrote, ”Parag taking the sign of his idol Virat Kohli”. The tweet further mentioned that “Kohli always welcomes youngsters,” and concluded saying “it feels great to see this.” Meanwhile, RCB won the match by 10 wickets, at the Wankhede Stadium in Mumbai. Opener Devdutt Padikkal brought up his maiden century (101* off 52 balls) in the tournament which was also the fastest by an uncapped player. On the other end, skipper Kohli was also in ominous form as he pitched in with a quickfire 72-off 47. The duo remained unbeaten and comfortably chased RR’s 177 in just 16.3 overs. Padikkal’s 100 was peppered with 11 boundaries and six maximums, while Kohli hit six four’s and three 6s, to give their side a massive win.

The RCB captain reached another milestone as he became the first cricketer to score 6,000 runs in the IPL. Playing in his 196th match, he reached the milestone in the 13th over of the second innings at Mumbai. On the other hand, the Bangalore franchise is on a good form of run, as they have won all four games so far to occupy the top spot in IPL 2021 standings.