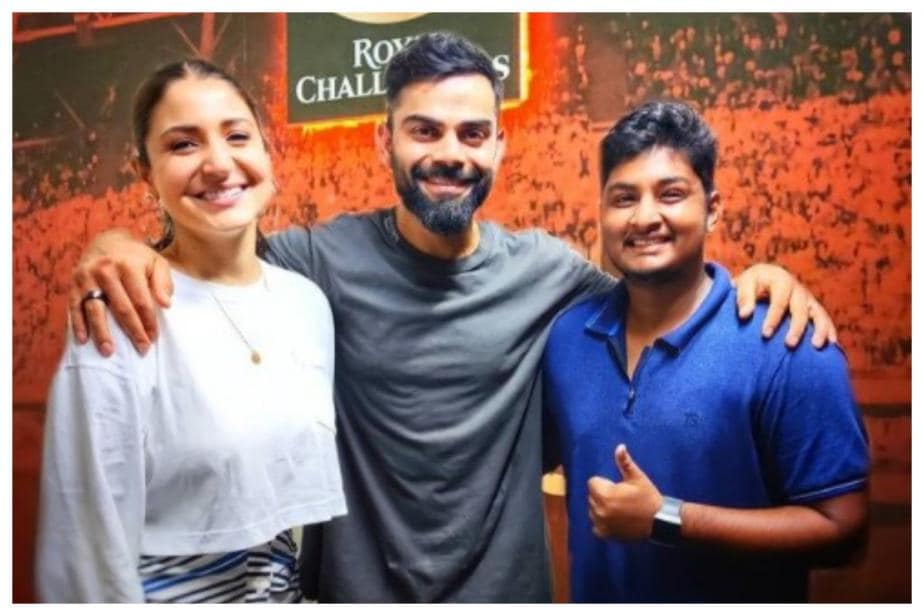 On Sunday, April 25, Royal Challengers Bangalore skipper Virat Kohli with his wife Anushka Sharma posed for pictures with RCB teammates and Fans. The event took place at a posh hotel in Mumbai.

Gabriel Ben, RCB’s new recruit posted a picture on his Instagram handle, stating it was the ‘most awaited’.

“The most awaited photo with virat bhayya and anushka mam @virat.kohli @anushkasharma,” he wrote in his caption. Several of Ben’s followers dropped heart emojis on his post and hailed him ‘so lucky’.

Another photo showcased how Virat Kohli and Anushka Sharma posed for a picture with one of their fans. Anushka can be spotted wearing a white and striped outfit with Virat alongside wearing grey t-shirt and blue shorts.

This past week quite a lot of pictures with Virat and Anushka have gone viral. In one the pictures, RCB skipper was seen carrying a burb cloth on his shoulder.

In a social media post Anushka Sharma wrote, “We have lived together with love , presence and gratitude as a way of life but this little one, Vamika has taken it to a whole new level ! Tears , laughter , worry, bliss – emotions that have been experienced in a span of minutes sometimes ! Sleep is elusive but our hearts are SO full. Thanking you all for your wishes , prayers and good energy.”