IPL 2021: WATCH | PBKS' Harpreet Brar Receives a Departing Pat on the Back From Virat Kohli 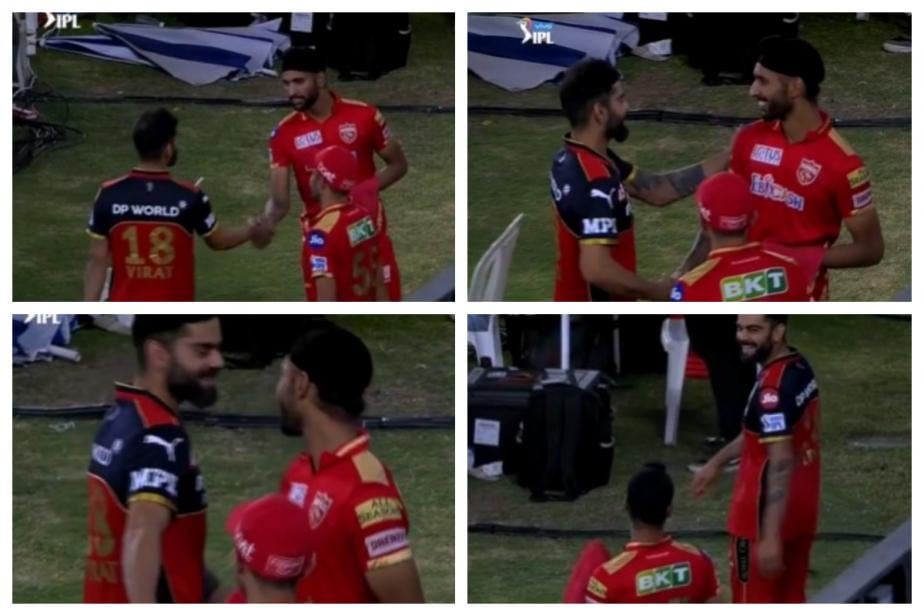 In a touching gesture of showmanship, Royal Challengers Bangalore skipper Virat Kohli could be seen patting Punjab Kings all-rounder Harpreet Brar on the back as the 26th match of the season came to a conclusion.

Kohli, who’s side lost to the KL Rahul-led side by a margin of 34 runs, could be seen shaking hands and smiling at the rival cricketer before patting his back and leaving the grounds. The IPL official Instagram account captured the moment with the caption, ‘First, the wicket & then, the appreciation from the man himself! @harpreetsbrar95 will surely cherish this moment with @virat.kohli.’

IPL 2021: ‘It Was Special to Get Virat Kohli as First IPL Wicket’ – Harpreet Brar

Brar had been instrumental in his side’s success against RCB after taking out the team’s trident of Kohli, AB de Villiers and Glenn Maxwell during the second innings of the game. He also put up a reasonable batting performance, supporting Chris Gayle (46) and KL Rahul (91)’s bid to the total with a 25 off 17 balls.

Meanwhile, the Royal Challengers side fell behind by a disappointing 34 runs as they struggled to chase Punjab Kings’ brilliant 179/5 as Kohli, 35 off 34 and Patidar 31 (30) came in the top-order. Maxwell and de Villiers’ dismissal only set things downhill from there.

“With the bat we never got the momentum, they bowled well to be honest, hit the right areas. Just kept the pressure going. But as batsmen as well we could have tried more things at the start. It was tough to hit through the line. It was about making a partnership and making sure you’re there to keep getting the boundaries, bat at a strike rate of at least 110. We didn’t manage to do that. We understand the areas where we lost momentum,” the skipper said, regarding the side’s loss to Punjab Kings.

RCB is currently third in line to the top of the table while Punjab Kings managed to push to number five.