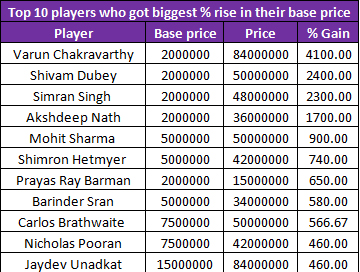 Here is the final list of all the players sold today!

That's the final sell for the day, the end of the IPL auction. Again, some big millionaires and some surprises exclusions. We will have all the reactions and videos up on Cricketnext soon!

Ashton Turner is sold to Rajasthan Royals for Rs 50 lakh

Manan Vohra is sold to Rajasthan Royals for Rs 20 lakh

Bandaru Ayyappa is sold to @DelhiCapitals for INR 20 lacs

Joe Denly is sold to KKR for Rs 1 crore!

Shubham Ranjane is sold to @rajasthanroyals for INR 20 lacs

Murugan Ashwin goes to Kings XI Punjab and Ruturaj Gaikwad to CSK. Both at a base price of Rs 20 Lakh

Jalaj Saxena is sold to Delhi Capitals for Rs 20 Lakh!

“I was a bit surprised when he went unsold initially because he is a great player. He has got some good tricks under the belt and I think RCB needed a player like this. Apart from Virat, they didn’t have any substantial Indian batsman and after they didn’t retain Sarfaraz Khan and Mandeep Singh, someone like Nath who has enough first class experience under his belt and someone who can play spin really well is a good buy.” Star Sports expert for VIVO IPL 2019 Auction on Akshdeep Nath.

Akshdeep Nath is sold for a whopping Rs 3.6 crore to Royal Challengers Bangalore

It is the big story for today and I never thought he was going to make so much money today, everybody has done their homework well, he is a quality player. When you’re looking at a future it is great, he is just 17, he has got to work on his wicket keeping, but as a batsman he is great, brilliant player, I would say right hand Rishabh Pant. He played at an emerging trophy in Sri Lanka, he got a few sixes, but he is a quality player with potential. Kiran More on Prabhsimran’s buy by Kings XI Punjab

Manoj Tiwary and Chris Jordan are both unsold!

Unsold players are back, Martin Guptill goes to Sunrishers Hyderabad for Rs 1 crore!

Kings XI Punjab and Royal Challengers Bangalore are in a bidding war for 15 year old Prayas Ray Barman! He is sold for Rs 1.5 crore

Liam Livingstone to Rajasthan Royals for 50 lakh and Keemo Paul to Delhi Capitals for Rs 50 lakh!

Prabhsimran Singh is really raking in the moolah,  Royal Challengers Bangalore and Kings XI Punjab are at it.,Mumbai Indians also join in! From a base price of Rs 20 lakh, he is sold for Rs 4.8 crore

Harry Gurney is sold to KKR for Rs 75 lakh!

Nikhil Naik is sold to KKR for Rs 20 lakh

IPL Auction 2019 Live Updates: Murugan Ashwin goes to Kings XI Punjab and Ruturaj Gaikwad to CSK. Both at a base price of Rs 20 Lakh

PREVIEW: Once a sought-after property, Yuvraj Singh faces the risk of going unsold at the 2019 IPL auction here Tuesday with the franchisees factoring in the availability of foreign players in a World Cup year. Yuvraj, who fetched a record Rs 16 crore deal in his prime, was bought by Kings XI Punjab for his base price of Rs 2 crore at the auction held before the last edition. While Chris Gayle repaid the faith KXIP posed in him with a fruitful season, Yuvraj could not set the house on fire, managing just 65 runs in eight games. No wonder the team decided to release him.

The 37-year-old, who last played for India in June 2017, has put himself in the Rs 1 crore base price bracket this time alongside other capped Indians — Wriddhiman Saha, Mohammed Shami and Axar Patel. In fact, no Indian figures in the highest base price of Rs 2 crore among a pool of 346 cricketers set to go under the hammer. The venue is new with the Pink City hosting the event instead of Bangalore and so is the auctioneer, Hugh Edmeades, who replaces Richard Madley after 11 seasons. The nine players in the Rs 2 crore bracket are Brendon McCullum, Chris Woakes, Lasith Malinga, Shaun Marsh, Sam Curran, Colin Ingram, Corey Anderson, Angelo Mathews and D’Arcy Short.

Teams are also likely to chase experienced overseas players such as Dale Steyn, Morne Morkel, Jonny Bairstow and Alex Hales, who have put themselves in the Rs 1.5 crore category. Indian all-rounder Jaydev Unadkat, who was bought for Rs 11.5 crore by Rajasthan Royals, will also feature in the same bracket. A total of 70 players can be bought at the auction with 20 slots available for the the foreign players. India Test regulars like Cheteswar Pujara and Ishant Sharma have also thrown their hat into the ring with base prices of Rs 50 and Rs 75 lakh respectively. Alongside the big names, a host of uncapped Indian players will be up for grabs with some of them expected to turn millionaires overnight. Keeping the hectic schedule in mind leading up to the World Cup in England from May 30 to July 14, Australian stars like Aaron Finch and Glenn Maxwell have opted out of the auction. Though dates and venue are not yet announced, the IPL is expected to run from the last week of March to mid-May. Since the World Cup will begin two weeks after the IPL, it has raised questions on the availability of the Australian players who will be named in the squad for the showpiece. The same goes for England players who will be required to report to the World Cup preparatory camp in the middle of the IPL. The teams will go into the auction well aware of the players’ availability. With Rs 36.20 crore, KXIP will have maximum money to spend, followed by Delhi Capitals (Rs 25.50 crore), Rajasthan Royals (Rs 20.95 crore), Royal Challengers Bangalore (Rs 18.15 crore), Kolkata Knight Riders (Rs 15.20 crore), Mumbai Indians (Rs 11.15 crore), Sunrisers Hyderabad (Rs 9.70 crore) and Chennai Super Kings (Rs 8.40 crore).