IPL Auction | How the Teams Stack Up After Reinforcing Squads

So, at the end of this process, how do the eight teams stack up? Who has the most balanced squad? Let's find out.

351 players were in contention for 70 possible vacant spots at the IPL 2019 Auctions in Jaipur on Tuesday. When the process was completed, a total of 60 were sold, including 40 Indians and 20 overseas players. 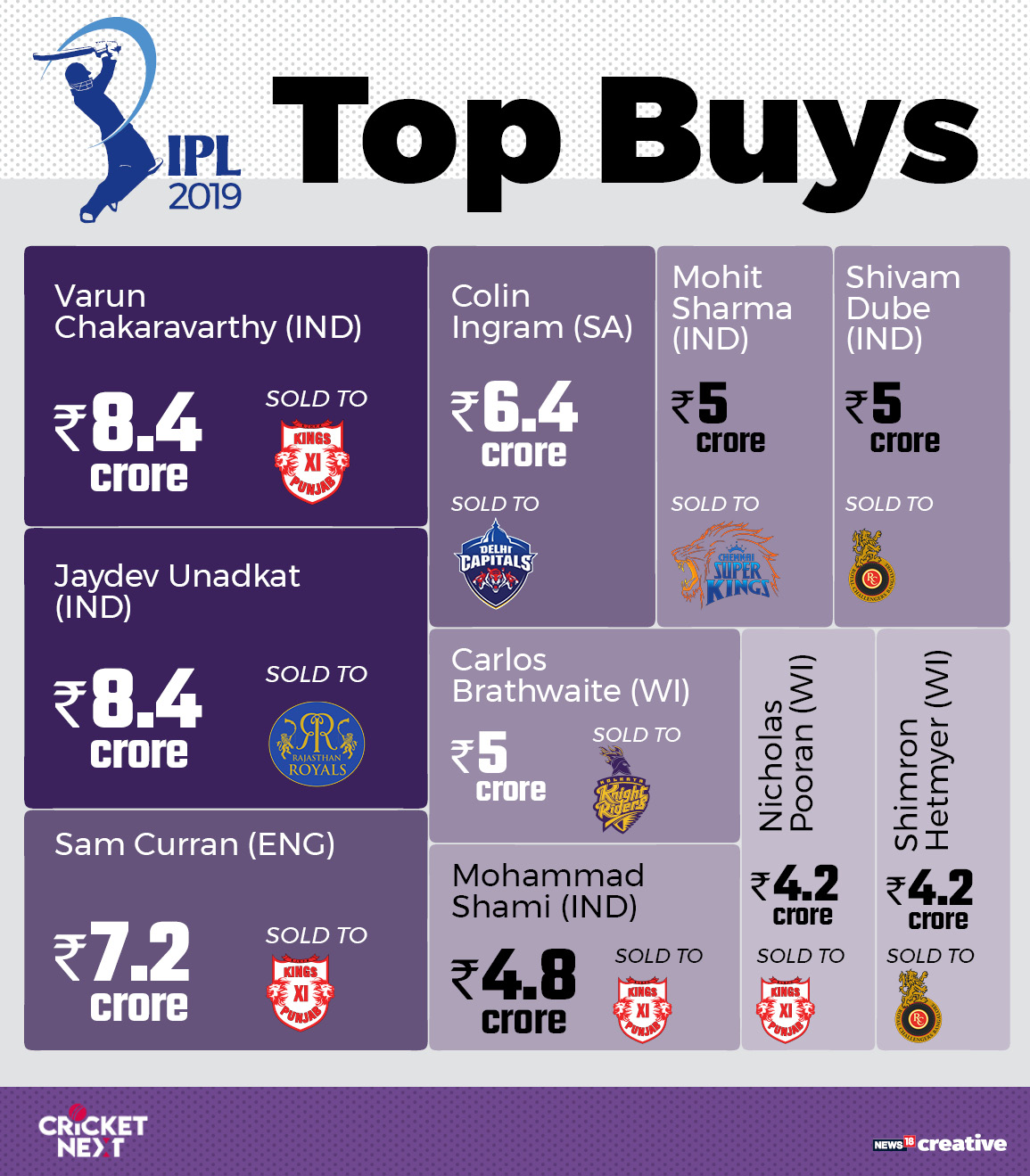 Among the other eye-catching bids were 17-year old Prabhsimran Singh, the Punjab Under-19 captain from Patiala, who was a surprise bid and went for a whopping INR 4.8 crores to Kings XI. This made him amongst the 10 most expensive buys in the auction. As many as 8 players crossed the 5 crore club (INR 5 crores and more) – Carlos Brathwaite, Axar Patel, Mohit Sharma, Shivam Dube, Colin Ingram and Sam Curran, besides Unadkat and Chakaravarthy.

Dube is a batting all-rounder from Mumbai who has a reputation for hitting sixes. The left-handed batsman clobbered Pravin Tambe for five sixes in the eliminator of the Mumbai T20 League earlier in 2018. He has a strike rate of 147.65 in 12 T20 innings and has also scalped 10 wickets with his useful right-arm medium pace.

Curran was the most expensive overseas player and was bought by Kings XI for INR 7.2 crores.

He was one of the five English players who was sold at the auction, the other being Jonny Bairstow, Joe Denly, Liam Livingstone and Harry Gurney. Only two Australians were sold – Moises Henriques and all-rounder, Ashton Turner. Not surprising given their first team players won’t be allowed to play the entire IPL with the World Cup immediately after.

The prominent players who went unsold included as many as six from amongst the nine in the 2 crores-club - Brendon McCullum, Shaun Marsh, Corey Anderson, Angelo Mathews, D’Arcy Short and Chris Woakes.

So, at the end of this process, how do the eight teams stack up? Who has the most balanced squad? 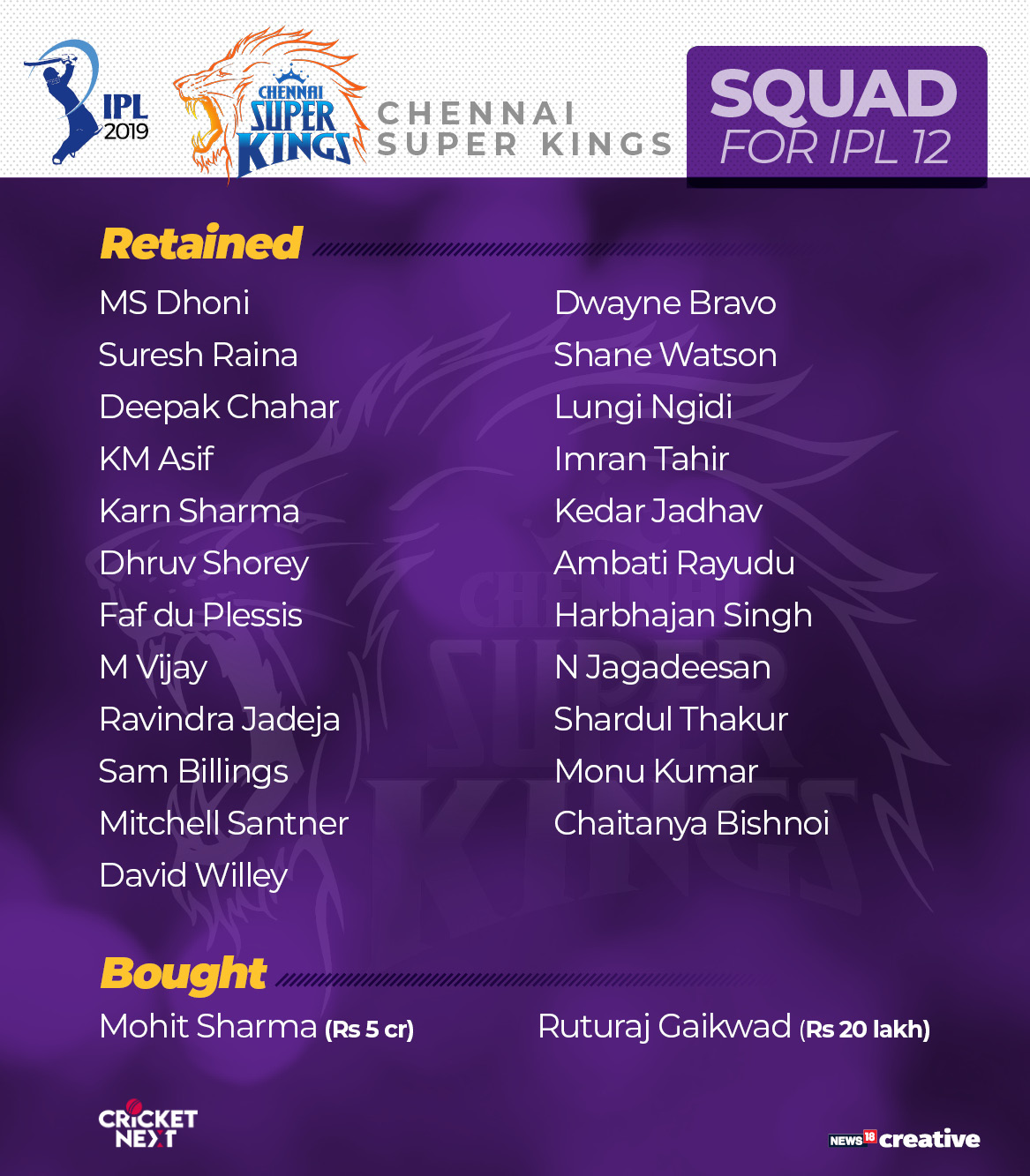 Having retained most of their squad, CSK had a limit for two domestic buys. Mohit Sharma, who had represented the franchise from 2013-15, was brought back. He went for INR 5 crores from a base price of INR 50 lakhs and was amongst the ten most expensive purchases in the auction.

CSK needed a batsman at the top of the order and not surprisingly, they went for Ruturaj Gaikwad.

Overall, they have a very experienced unit with the likes of Dhoni, Jadeja, Watson, Du Plessis, Raina and Harbhajan amongst their ranks and there wasn’t much for them to do at this auction. 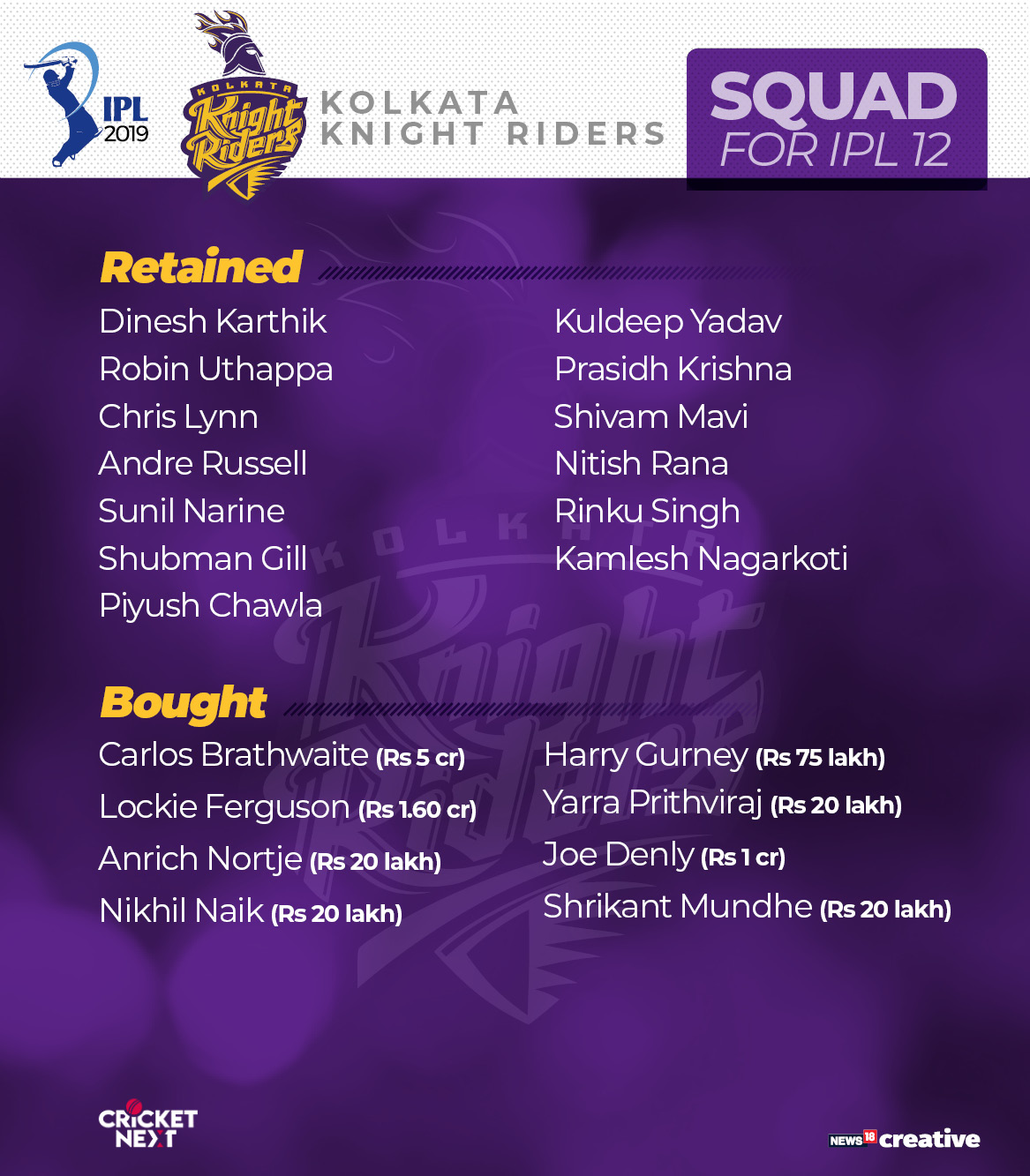 KKR needed an all-rounder and a couple of overseas fast bowlers to boost their squad. They opted for the West Indian T20 captain, Carlos Brathwaite who has a career T20 strike rate of 146.89 – for INR 5 crores.

Their fast bowling slots were fulfilled by the New Zealander Lockie Ferguson, and the experienced Harry Gurney from England. Gurney is a left-arm seamer who has picked 134 wickets in 110 T20 matches. They also opted for the experienced opener from Kent, Joe Denly – the 32-year old has scored 4864 runs in 186 T20 innings and will add stability to the top-order. They also picked Nikhil Naik – an attacking wicket-keeper batsman.

Overall, KKR has a strong batting line-up – Uthappa, Lynn, Karthik and Shubman Gill make for a strong top-order. They also have a terrific spin bowling arsenal with the likes of Narine, Kuldeep and Chawla. SRH needed an opener to replace Dhawan at the top who had been traded to Delhi Captials. They bought two – Martin Guptill and Jonny Bairstow. The New Zealander has scored 6167 runs in 2018 innings at an average of 32.62 and strike rate of 128.21. Bairstow could also play the additional role of wicketkeeper – SRH needed an extra man behind the stumps. They also roped in Wriddhiman Saha for the role.

SRH has one of the strongest batting units in the tournament – Warner, Williamson, Guptill, Pandey and Bairstow. They lack a world class experienced overseas fast bowler which may hurt them in the tournament. Delhi needed an experienced attacking batsman at the top and Colin Ingram was their answer. The South African was their most expensive buy at INR 6.4 crores. He has scored 5186 runs in 197 T20 innings at a strike rate of 139.29 and has impressed in recent times with his hitting abilities.

They also made a strong bid for Ishant Sharma to boost their Indian pace bowling resources and bought the speedster for INR 1.1 crores. Delhi now has a strong pace attack with the likes of Rabada, Boult and Morris also in their ranks. They also added the experienced Axar Patel as a spin bowling all-rounder. RCB made two big buys in the auction. They roped in the hard-hitting West Indian, Shimron Hetmyer for INR 4.2 crores to give support to AB de Villiers and Kohli in the top-order. But their most expensive buy was the Mumbai all-rounder, Shivam Dube who went for 25 times his base price of INR 20 lakhs. They made a surprising bid for all-rounder, Akshdeep Nath, who went for INR 3.6 crores.

RCB had a good auction and have a balanced all-round squad now with most bases covered. Mumbai already had a strong bowling unit with the likes of Bumrah, Cutting, McClenaghan, Milne and Behrendorff. They further strengthened it by signing Lasith Malinga and Barinder Sran. They needed additional firepower in their batting and have taken the risk with Yuvraj Singh. Kings XI made the maximum signings in the auction – 13. They got on board the mysterious spinner from Tamil Nadu – Varun Chakaravarthy – who went for INR 8.4 crores – and was the joint-most expensive buy in the auction.

Kings XI desperately needed quality all-rounders and thus it was not surprising that they paid INR 7.2 crores for Sam Curran and also purchased Moises Henriques.

They also boosted their pace attack by singing the in-form Mohammed Shami to get a well-rounded feel to their squad now. 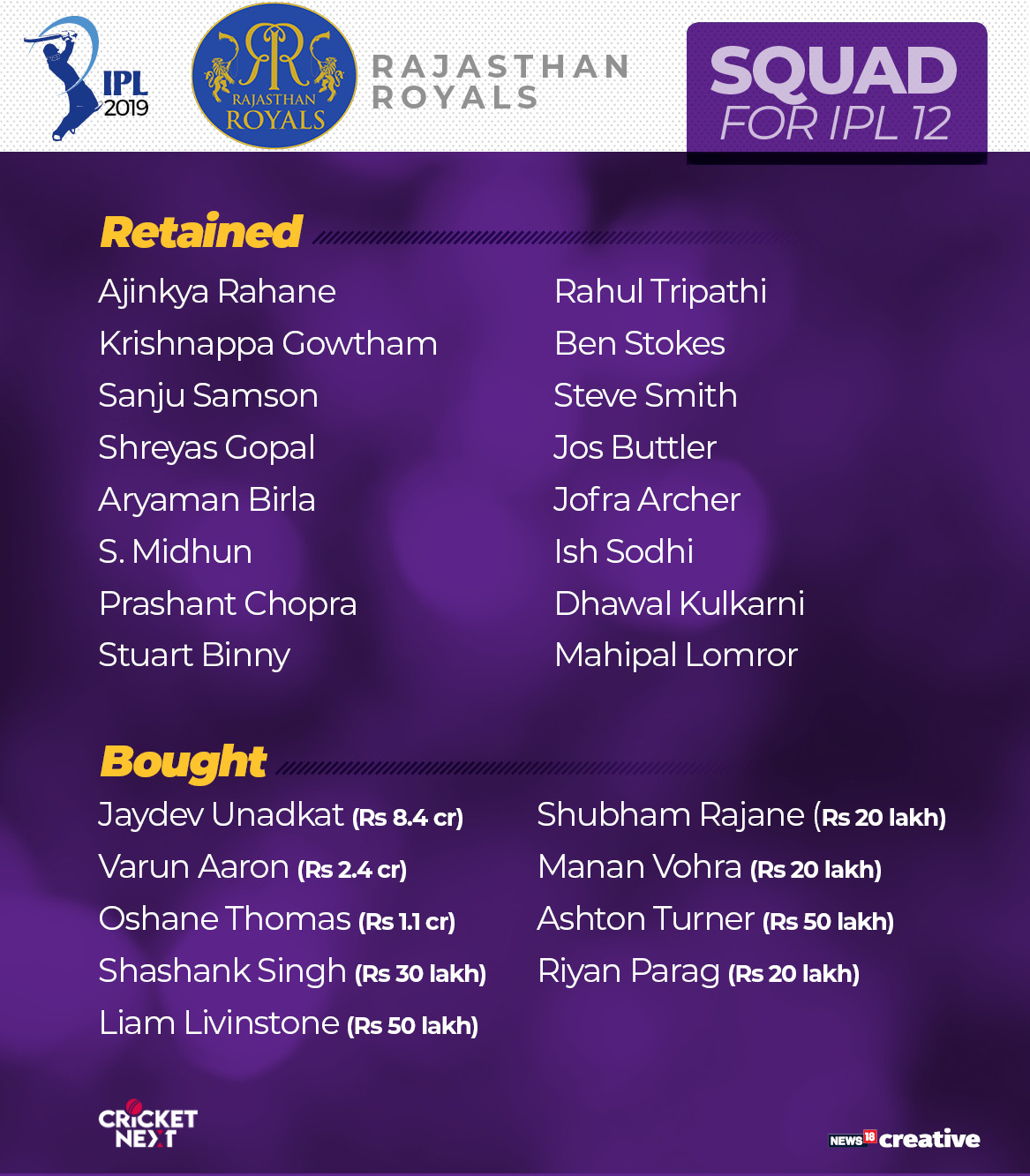 Royals bought back Jaydev Unadkat for INR 8.4 crores – 3.1 crores lesser than what they had paid for him last season. They also purchased Varun Aaron thus consolidating their fast bowling reserves.

They needed a local batsman in the top/middle order and thus the inclusion of Manan Vohra was not a surprise.

Rajasthan still have a formidable top-order, but the exception of Stokes (whose availability in the latter stages will be a concern), and have a rather inexperienced middle order. They also do not have a world class spinner in their squad.