You can also follow our live blog for ball-by-ball updates and analysis on cricketnext.com.

WICKET! All over then, Karn Sharma gets Ben Laughlin off the first delivery. That seals a comprehensive win for Chennai Super Kings as they win this one by 64 runs!

WICKET! Karn Sharma also gets his name on the wickets column now, its the top spinner and Unadkat misses the ball. It hits the stumps and Royals are 140/9 after 18.2 overs,

Karn Sharma comes into the attack in the 17th over, and mere formalities here. 9 runs are picked from the over but that's not going to be of any help. They are 132/8

WICKET! CSK seem to be in a hurry now, Shardul Thakur with an absolutely sensational catch off his own bowling. Binny gets an edge but Thakur has to make up a lot of ground, he does that and pulls off a sensational catch. RR are 117/8.

WICKET! Another one bites the dust, falling like 9 pins now are the Rajasthan batsmen. This time its K Gowtham who gets an edge and Dhoni completes a simple catch. Watson gets a wicket. RR are 115/7.

WICKET! Tahir strikes now, he has been expensive all day but gets the important breakthrough here. He airs one and its taken by Billings at deep midwicket boundary. Thats the game then. RR are 111/6 after 13.5 overs. Stokes departs for 45.

Again, 9 runs off the over but the required run rate has almost touched 15 rpo here. Stuart Binny has joined Ben Stokes in the middle but Rajasthan need a royal miracle to come out on top here.

Since his score of 93 against KKR in 2017, Tripathi hasn’t scored a 30+ score in the subsequent 10 innings including this one.

WICKET! Well, its certainly not Tripathi who is providing the support. He departs for 5 now as he looks to go for a big heave but can only manage to air that one. It was a slower ball. Taken in the deep by Billings. Royals are 96/5

Imran Tahir again concedes 10 runs in the over, Stokes starting to find some sort of timing finally but he needs support from the other end. Can Rahul Tripathi provide that kind of support? Royals are 96/4 after 12 overs

Bravo concedes 7 runs off that over as Rahul Tripathi joins Ben Stokes out in the middle, 11 overs gone here and Royals are 85/4. 120 required off 9 overs

WICKET! Dwayne Bravo comes into the attack and strikes straight away, first ball is a slower one and Buttler reaches for that one but can only manage a top edge. Tahir completes a simple catch. Royals are 77/4 after 10.1 overs.

Imran Tahir with yet another expensive over here, he concedes 10 runs from his second over. Stokes and Buttler certainly looking settled but a big effort required here, 128 needed from 10 overs now.

Shane Watson concedes 10 runs off his second over as Buttler and Stokes step on the gas here, they don't really have much choice. After 9 overs, Royals are 67/3.

Jos Buttler’s boundary off Imran Tahir was the 1st boundary after 39 balls. The last boundary came on the first delivery of the 2nd over. He follows that up with a huge six. RR are 57/3 after 8 overs.

Deepak Chahar completes his 4 overs, and what a spell from the youngster. He ends with figures of 2/30. Seven overs gone here and Royals are 43/3, the required rate also nears 13.

Excellent start this for Chennai Super Kings, the game might well be already over for Royals. The powerplay is up and they have lost their top order with just 35 runs on the board. Royals 35/3 after 6 overs.

This is the 1st time Deepak Chahar has taken multiple wickets in IPL.

WICKET! Another one departs, this time its the skipper - Ajinkya Rahane.Knuckle ball from Chahar and Rahane comes down the track only to see his stumps rattled. Royals in deep trouble here and are 32/3

Ben Stokes has joined Ajinkya Rahane in the middle and this you have to say is the make or break partnership for the Royals. They need to stitch a big one if Royals are to have any chance. 4 overs gone and they are 31/2

WICKET! Deepak Chahar strikes now, Royals chase really falling apart here. Dangerous Samson departs, trying to pull for a six off his hips but he hits it straight to Karn Sharma. RR 25/2 and in trouble.

WICKET! Shardul Thakur strikes and Klaasen can't last long either. Thakur gets one to go right through him and clatter onto the stumps. Big wicket this and Royals are 20/1 after 1.5 overs.

Excellent over for Deepak Chahar is spoiled towards the end here, first Rahane comes down the track and gets one right off the middle which goes all the way into the stands. Then next one is a chinese cut which goes for a four. Royals are 14/0 after 1 over.

DROPPED! Watson returns the favour to the Royals, after he was dropped in the first over at first slip, he now drops Klaasen on 0. The pace almost surprising him, Klaasen gets a life.

So, the Super Kings are back on the field..Rahane and Klaasen open the innings for Royals and they will need a record chase to win this one here! They need someone to play a big hand

End of innings then, 8 runs conceded off the final over and CSK finish at 204/5. Royals will need some chasing to win this one!

WICKET! Watson departs here, after a superb innings. Trying to go for the big heave but can only manage a small outside edge. Buttler takes a good catch. He departs for 106 off 57 balls. CSK are 202/5.

Ben Stokes also proving to be expensive here, 12 runs coming off that over. CSK slowly reaching 200 here, they are 196/4 after 19 overs. Meanwhile, Stokes has had an horrendous day with the ball. He has conceded 39 runs off his 3 overs here.

Shane Watson becomes the 4th player to score a century vs RR in the IPL. 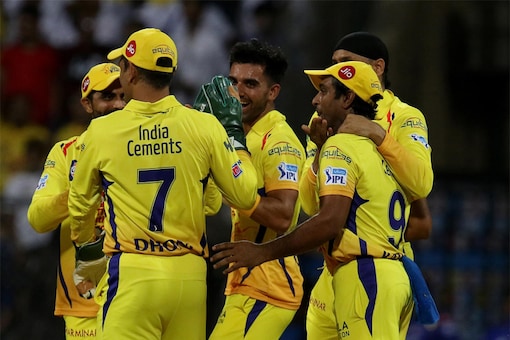 PREVIEW: After losing their previous Indian Premier League (IPL) clash by a whisker, Chennai Super Kings (CSK) will aim to start off with a win against Rajasthan Royals (RR) in their new home ground — the Maharashtra Cricket Association (MCA) Stadium, here on Friday. CSK were forced to move out of their original home venue in Chennai amid political unrest over the Cauvery water-sharing issue. Both the teams, who have returned to the league after serving two year bans following the spot-fixing scandal, will face each other for the first time in the ongoing edition.The live telecast of the IPL 2018 match between Chennai Super Kings and Rajasthan Royals will start at 8 PM on April 20th (Friday). Today’s IPL live match can be seen on the Star Sports network and IPL online free live streaming will be available on hotstar.com and Jio app. You can also follow our live blog for ball-by-ball updates and analysis on cricketnext.com.
While Chennai lost their previous match against Kings XI Punjab (KXIP) by 4 runs in Mohali, the Ajinkya Rahane-led Rajasthan suffered a seven-wicket defeat against Kolkata Knight Riders (KKR) at home. With two wins and two defeats, Rajasthan are placed fifth with four points, while the Mahendra Singh Dhoni-led Chennai also have an equal number of points after two wins from three matches and are at the fourth position.Rajasthan started their IPL 2018 campaign on a poor note, hammered by Sunrisers Hyderabad by 9 wickets. They however, gained momentum and registered two back-to-back wins against Delhi Daredevils and Royal Challengers Bangalore. Later, Kolkata outclassed them by seven wickets. With 185 runs from four games, Sanju Samson has been the most impressive batsman for Rajasthan while skipper Rahane has amassed 130 runs.
Rajasthan’s bowlers — K. Gowtham and Ben Laughlin — have performed well while leggie Shreays Gopal has also been economical. However, all-rounder Ben Stokes, who was bought for a whopping Rs 12.5 crore, has failed to fire till now. On the other hand, two-time champions Chennai had a great start to their campaign with back-to-back wins against defending champions Mumbai Indians and Kolkata Knight Riders. It was Dwayne Bravo’s 30-ball 68 against Mumbai which helped Chennai register their first win and later, Sam Billings’ 23-ball 56 guided them home against Kolkata Knight Riders in a high-scoring match. In their last match against Kings XI Punjab, Ambati Rayudu (49) and Dhoni (79) almost handed Chennai a hat-trick of wins but they fell short by four runs. In the bowling department, Shane Watson has been impressive with five wickets from three games while Shardul Thakur and Imran Tahir have three wickets each from as many games. It will also be Chennai’s first game at Pune, which is now their new home for this year’s edition of the cash-rich league, and the two-time champions will be keen to regain lost momentum.