IPL 2021 Match 30 between Kolkata Knight Riders and Royal Challengers Bengaluru at Ahmedabad is rescheduled after a player tested positive for Covid-19, according to reports.

Thank you so much @iamsrk , @VenkyMysore and jay mehta sir , for comforting us and giving us the confidence that as owners and as a franchise you have our backs🙏, makes me so happy to be a part of such a team💜

"There is no going back now with half of the tournament done. The news (positive cases in KKR) makes the BCCI's job more challenging," a franchise official told PTI. "We have been hearing that a player got infected because he was taken outside the bubble for scans. So, it could have happened outside the bubble. As far as I know, everyone is strictly following the protocols laid out by the BCCI and there was no breach there."

Here's what KKR player Harbhajan Singh has to say

Latest update from CSK camp: L Balaji and a bus driver have tested positive for COVID-19 as per the latest reports on Monday evening: ANI

Information from Boria Majumdar on Sports Tak: There was no breach of bubble by Varun Chakravarthy or Sandeep Warrier. His visit to hospital was well within the guidelines, with all protocols followed. He was in hospital for only around five minutes, and the staff that attended him were asymptomatic and vaccinated. KKR players are currently in hard quarantine. Varun and Warrier will be in quarantine for at least 10 days.

In better news from the IPL, ESPNcricinfo reporting that KL Rahul has undergone a successful surgery for his acute appendicitis issue. And that he has been cleared by the doctors to resume playing in a week. It remains to be seen if Rahul returns to the IPL bubble in the PBKS camp after completing quarantine.

Here's the latest update from Delhi on the IPL situation

Deleted my earlier tweet on @delhi_cricket. Some Facts. Groundsmen did test positive but none were on duty yesterday or day before during the games. All staff r tested on gap days. indicted positive case were screened and removed. So players r safe.

The IPL has been taking place in Ahmedabad at a time when the city and the state of Gujarat is ravaged by the second wave of the Covid-19 pandemic. A total of 70,602 have so far been infected and 834 have died of Covid-19 in Gujarat since the first IPL match was played in Ahmedabad on April 26. Delhi is faring worse than any other Indian city in terms of Corona cases, but the IPL matches are continuing to be played. Delhi is scheduled to host eight matches.

CSK have cancelled their practice session following the development.

CSK CEO Kasi Viswanathan, bowling coach Laxmipathi Balajiand a bus cleaner are positive while the rest of the contingent, currently in Delhi, has tested negative. The three have taken a fresh test this Monday morning to to ensure it wasn’t a false positive and should that too be negative, they will be shifted outside the team bubble into isolation for 10 days and will only re-enter upon two negative tests.

DDCA too is dealing with COVID-19 cases with as many as five members belonging to the ground staff being infected. They all were on match duty when Rajasthan Royals took on Sunrisers Hyderabad on Sunday afternoon in Delhi. There are chances they may have come into contact with the players and support staff. “It’s confirmed that five DDCA ground staff tested Covid positive. They were on duty on the ground on the last IPL Match (RR vs SRH) at Kotla. Since they were on ground duty, there are chances that they must have come in contact with players and team staff,” a DDCA official was quoted as saying by InsideSport.

IPL Coronavirus live updates: the bubble seem to be bursting for IPL as more positive cases from the various camps are emerging. Latest is CSK CEO Kasi Viswanath and bowling coach L Balaji, who was present in the dugout with the players in their last game on Saturday. One maintenance staff also has tested positive from the CSK camp. All three will undergo one more round of Tests to rule out false positive case. However, rest of the team members have all returned negetive Tests.

Now after KKR Camp hit by Covid-19 cases, 3 from CSK Camp test positive for Covid-19. However, as per cricinfo, none of them are players.

The Medical Team is also determining the close and casual contacts of the two positive cases during the 48 hours prior to collection of the sample that returned the positive test results.  The BCCI and the Kolkata Knight Riders prioritise the health and safety of everyone involved and all measures are being taken in that endeavour.

And here's the official confirmation from BCCI. "IPL reschedules KKR-RCB match slated for May 3, 2021 after 2 KKR players test positive. Varun Chakaravarthy and Sandeep Warrier were found to be positive in the third round of testing in the last four days. All other team members have tested negative for COVID -19," states a release.  The Medical Team is also determining the close and casual contacts of the two positive cases during the 48 hours prior to collection of the sample that returned the positive test results.  The BCCI and the Kolkata Knight Riders prioritise the health and safety of everyone involved and all measures are being taken in that endeavour.

KKR last played on April 29 against Delhi Capitals in Ahmedabad and the development is bound to trigger some anxiety in the tournament, which had been going along smoothly so far.

IPL KKR vs RCB Covid-19 Scare Live Updates: It is believed that Chakravarthy may have got the infection when he left the IPL bio-bubble through the official green channel to carry out a scan on his shoulder, reports Cricinfo. It further adds that expect Chakravathy and Warrier, all other players' results have come as negative

IPL KKR vs RCB Covid-19 Scare Live Updates: Chakravarthy reportedly received his positive result on Sunday night, with the side since being sent into isolation, reports Fox Cricket. Pat Cummins and Ben Cutting, the two Australians in the KKR camp also fear that they may have been exposed to COVID-19, the Australian media further reports. 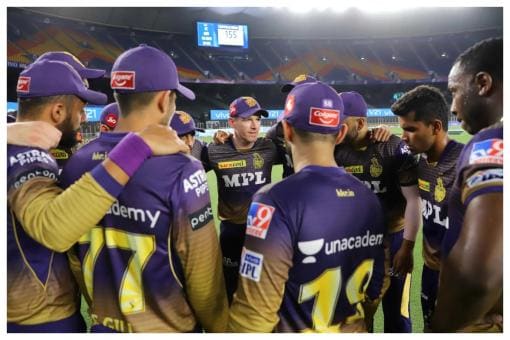 IPL Covid-19 Crisis Live Updates: It is being reported that the three members of the CSK contingent to test positive are CSK CEO Kasi Viswanath, Bowling coach L Balaji and one maintenance staff

Now, after confirmed Covid-19 cases in KKR camp, it is being reported the three members of the CSK contingent have also tested positive. However, none of them are players. As per InsideSport, 5 DDCA ground staffs on duty during RR v SRH have also tested Covid -19 positive

BCCI also have put out an official confirmation that Kolkata Knight Rider vs Royal Challengers Bangalore match is rescheduled after two players – Varun Chakravarthy, Sandeep Warrier – tested positive for Covid-19. The release alos confirms that all other team members have tested negative.

Varun Chakravarthy, Sandeep Warrier have Tested Positive for Covid-19 and few players are under isolation.

Cricbuzz reports that ‘some sort of communication has gone from the BCCI office to Ahmedabad’ and local organisers, Gujarat Cricket Association (GCA) have been told that the game will be rescheduled.

Players and staff are in isolation and as per reports Australian Pat Cummins is one of the players to have tested positive for Covid-19.

KKR are placed seventh in the points tally and RCB third.