Catch all the action of the Indian Premier League Eliminator between Kolkata and Hyderabad through our live blog.

KKR have snatched victory from the jaws of defeat. After losing early wickets, Karthik's 52 and Russell's 49 powered them to a fighting target. And then, the bowler's did the trick after Rahane and Samson had almost stitched together a match-winning partnership for RR.

Match Ends: That's it folks, Kolkata Knight Riders have beatn Rajasthan Royals by 25 runs to enter the qualifier two where they will been Sunrisers Hyderabad. At one stage, RR where in complete control of the match but they have simply messed it up and credit goes to Kuldeep who started it off with a wickets in the 16th over.

Andre Russell is now bowling the penultimate over of the innings and he gives away just three runs off the first three balls. That means RR now need 37 off 9 deliveries.

OUT: Prasidh Krishna bowls an excellent over under pressure and that may have won the game for KKR. He gave away just three runs off 6 deliveries and also picked up a wicket on the last ball of the over. Binny departs for 0. RR now need 40 off 12 a.k.a A Miracle!

OUT: A huge blow for Rajasthan Royals as Sanju Samson is caught out at the long on boundary by Searles off the bowling of Piyush Chawla. Rajasthan lose their third wicket and Stuart Binny walks out in the middle now. RR need 44 off 19.

Four and 50: Sanju Samson moves onto 49 as Chawla bowls a full toss and the right hander simply bludgeons the ball on the off side for a boundary. He then takes a single on the next ball and he completes his fifty off 37 deliveries. This is Samson's third 50 of the season.

Four: Klassen takes matter into his own hands as he plays the reverse scoop and that brings up his first four of the innings. Narine's four overs come to an end and he finishes with figures of 0/39. RR now need 51 off 24 delvieries and it is going to be another cliffhanger, like yesterday!

Kuldeep Yadav bowls an excellent over as he concedes just two runs from it and also picks up the wicket of Rahane in the over. RR now need 59 off 30 deliveries and they will have to get a move on now as slowly and steadily the required rate is going up.

OUT: Right after the time-out, Kuldeep Yadav has done the trick for KKR as he gets rid of Ajinkya Rahane. The RR skipper tried to sweep the ball but the ball took a leading edge and Kuldeep completed a good caught and bowled chance. Rahane departs for 46 as RR lose their second wicket for 109.

SIX: Sunil Narine bowled four dot balls to Sanju Samson and that had created a bit of a pressure on the youngter. However, the right hander hits a huge six over deep mid wicket to release that pressure. Both Rahane and Samson have now moved into their respective 40s. RR need 61 off 36 now.

50: The partnership between Samson and Rahane is worth 50 now off 42 deliveries. Since the dismissal of Tripathi, these two have batted really well and have taken RR's score closer to that of KKR's. The duo will look to continue to deal in singles and doubles before going for the kill in the latter stages.

Piyush Chawla concedes just 6 runs in that over, they are 96/1 here after 12 overs. RR need 74 off 48 now and with 9 wickets in the kitty, they will think that it is their match to lose from here.

Tight over that from Kuldeep Yadav, he concedes just 3 runs in that over. Kolkata need a couple of quick wickets here or otherwise Royals might just walkway with this one. They are 90/1 after 11

Searles with an expensive over there, he concedes a couple off maximums and 13 runs coming off the over, Royals are 87/1 after 10 overs

Again a boundary off the last ball, and there was one off the first ball as well. Rajasthan are certainly in front in the chase at this moment, they are 74/1 after 9 overs as we break for a timeout

Outside edge off Narine's last ball and it flies away for a boundary, spoils what would have been an excellent over there. Rajasthan Royals are 64/1 after 8 overs here

Kuldeep Yadav comes into the attack now, he concedes just 3 runs from the first over. 7 overs gone here and Royals are 54/1.

That's the end of the powerplay then, good start you have to say this for Rajasthan Royals. They are 51/1 here after 6 overs.

WICKET! Tripathi departs, he was looking good and its an important wicket. A tentative defence from Tripathi and it lobs up straight to Chawla. We have seen a lot of it on this pitch, Rajasthan are 47/1 after 5.1 overs.

15 runs from that Narine over and Rajasthan Royals are certainly making the most of the powerplay here, scoring at more than 9 rpo and they are 47/0 after 5 overs here

SIX and SIX! Tripathi gets underneath that one from Narine and deposits it over the long on boundary, into the stands. Follows that with yet another one into the mid-wicket boundary. Royals are 46/0 here

Good finish to the over after a sensational start from Rahane, picking up two early boundaries there. Rajasthan Royals are 32/0 after 4 overs here, and you have to say they have gotten off to a solid start in this huge chase.

Piyush Chawla bowling the wron'uns here and mixing them with the leg-spinners, making life difficult for the batsmen. Rahane survives after a decision is overturned. Royals are 21/0 after 3

Tight second over from Prasidh there, he concedes just 6 runs from the second over and Royals are 15/0 here after 2 overs.

SIX! Ajinkya Rahane deposits one over the boundary to get Rajasthan off to a flier here, he almost departed off the first delivery though and into the stands. Rajasthan are 9/0 after the 1st over.

Ajinkya Rahane is opening the innings here along with Rahul Tripathi here..Good to see the skipper taking responsibility and leading from the front..

So, that's the end of the innings then. Russell with a sensational finish, unbeaten on 49 off just 25 balls. That helps Rajasthan recover after a stuttering start and end at 169/7 in 20 overs.

WICKET! Searles departs, but the result is good for KKR as Andre Russell will be back on strike now. Its a slower ball and Searles looks to take the leather off it, but can only sky that one in the air. KKR are 164/7 after 19.4 overs here.

SIX! Andre Russells with a double-handed forehand there, it was a slower ball which he picked up and hits it straight over long off for a maximum. Just 8 runs from the over and Kolkata Knight Riders are 157/6 after 19 overs. 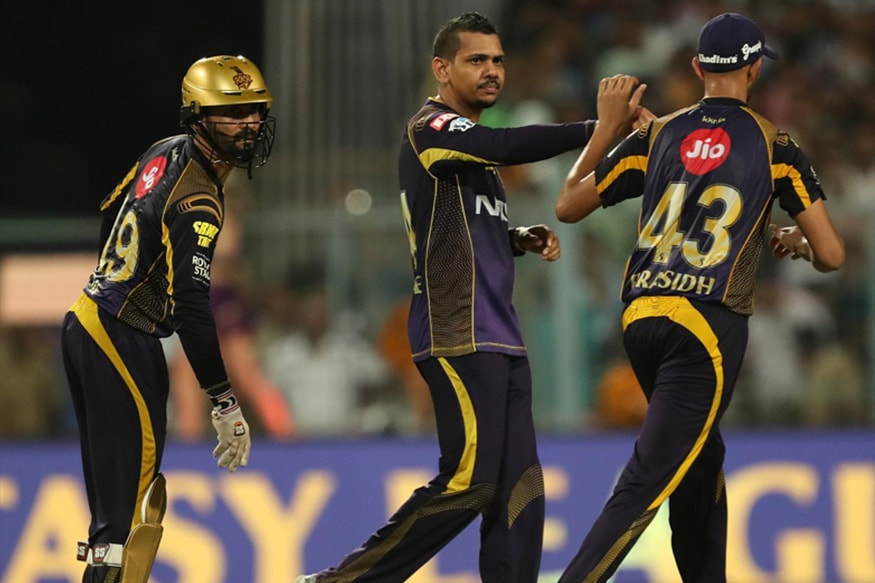 Live Updates: Heinrich Klaasen and Sanju Samson are playing well at the moment and they are building a good partnership after the dismissal of Rahane.

KKR are the only team among the four knockout entrants to have got their matches in their own backyard. If they win the Eliminator, their Qualifier 2 will also be at the same venue on May 25. Besides having the home advantage, KKR will also start as favourites against depleted Royals who made the playoffs by the skin of their teeth. The live telecast of the IPL 2018 match between Kolkata Knight Riders and Rajasthan Royals will start at 7 PM on May 23rd (Wednesday). The match can be seen live on the Star Sports network and live streaming will be available on hotstar.com. You can also follow the match live blog for ball-by-ball updates, full score and IPL match highlight on cricketnext.com. Sans the services of in-form England wicket-keeper-batsman Jos Buttler and fellow all-rounder Ben Stokes, Rajasthan got past Royal Challengers Bangalore in a must-win last league engagement to make it to the knockouts. Chennai Super Kings' five-wicket victory over Kings XI Punjab sealed Royals' place in the playoffs while Mumbai Indians also lost to Delhi Daredevils. Both Punjab and Mumbai were in fray for the fourth playoff spot which went to Royals. For KKR, a five-wicket triumph over Sunrisers Hyderabad ensured they finished third in the table.

KKR's main weapons has been Karthik and Sunil Narine alongwith sizable contributions from the wrist spinners Kuldeep Yadav, Piyush Chawla and dashing Australian opener Chris Lynn. Underlining that his match-winning innings in the Nidahas Trophy final was no flash in the pan, Karthik has led from the front. The 33-year old stumper-batsman has been a terrific finisher for the KKR this season. Of his 438 runs this season, 412 were made in 13 innings at No. 5 or lower; only Kieron Pollard's 419 in 17 innings in 2013 is higher. Mystery spinner Narine has enhanced his credentials as an opener by becoming only the fourth player to score 300 plus runs and grab more than 15 wickets in an IPL season, after Shane Watson, Dwayne Bravo and Jacques Kallis. Apart from the pair, Lynn has struck form at the right time after enduring a subdued season by his standards. Andre Russell is always a threat with bat and ball and in M. Prasidh Krishna -- who returned career best figures of 4/30 against Hyderabad -- KKR have found a tall pacer who hits the deck hard and bowls good length stuff. Royals will once again miss Buttler who is on national duty after getting a Test call-up. Buttler has been their batting mainstay piling up 548 runs in 13 matches at 54.80. Big-hitting South African wicket-keeper batsman Heinrich Klaasen showed his class in the last game, his 32 off 21 studded with some stunning shots.