IPL 2020, KKR Vs KXIP at Abu Dhabi Highlights: As it Happened

IPL 2020 Kolkata Knight Riders vs Kings XI Punjab, Latest Updates - KKR WIN: Narine comes for the final over. Maxwell gets two from the first ball. He also gets a four from the third ball. Narine has a wicket here as Mandeep is caught in the deep. And the last ball ends in a four. KKR win by 2 runs.

KKR WIN: Narine comes for the final over. Maxwell gets two from the first ball. He also gets a four from the third ball. Narine has a wicket here as Mandeep is caught in the deep. And the last ball ends in a four. KKR win by 2 runs.

IPL 2020 Live Score KXIP 151-4: What is happening here. KL Rahul is yorked by Prasidh. Out for 74. Can't ask for more from a youngster. Looks like KXIP have thrown it away once again.

IPL 2020 Live Score KXIP 149-3: Prasidh comes for the penultimate over. This is still anyone's game at the moment. That Sunil Narine over changed things a bit. And Prabhsimran goes for a shot. But is caught by Nitish Rana. This is getting tight.

IPL 2020 Live Score KXIP 136-1: Nagarkoti gets another over, and that might not be the best ploy against a set KL Rahul. The latter has cut him for a four. Make it another four -- this time by Pooran.

IPL 2020 Live Score KXIP 115-1: Finally KKR have a wicket here. Prasidh Krishna removes Mayank for 56. He just tries to play one over mid wicket but is caught by Shubman Gill. Still KXIP are in a very good position here.

IPL 2020 Live Score KXIP 106-0: Now it's Cummins who comes back into the attack. Two fours in two balls means a fifty for KL Rahul. He continues his fine form here. And in the same over Mayank also gets to his 50.

IPL 2020 Live Score KXIP 86-0: Mayank creams one from Nagarkoti for four, through the covers. These guys are batting really well, and KXIP are on their way to a comfortable win. Make it another four. Mayank is on fire.

IPL 2020 Live Score KXIP 67-0: Varun continues. KKR are just struggling to create a chance for a wicket here. KXIP are in total control of the proceedings here.

IPL 2020 Live Score KXIP 54-0: Varun Chakravarthy comes into the attack now. Fifty partnership comes up for Mayank and Rahul. But it was a good over, KKR do need wickets here.

IPL 2020 Live Score KXIP 47-0: Kamlesh Nagarkoti comes into the attack now. Punjab have started out really well, and a win from here shouldn't be a tough ask. Rahul too gets into the act and pulls one for a four. Another over comes to an end.

IPL 2020 Live Score KXIP 28-0: Straight face of the bat, and Mayank Agarwal lofts one over the bowler's head for a four. And here comes another four, in fact the ball almost hit the non-striker. He is not finished as yet, as Agarwal slams a six over covers, an excellent shot that.

IPL 2020 Live Score KXIP 14-0: It's been decent start by the KKR bowlers, and are not giving any room to the opposition batsmen to free arms. Just six runs come from the over.

IPL 2020 Live Score KXIP 8-0: Prasidh Krishna comes into the attack. There is a chance for a catch as Rahul lofts one. Russell gets his hands to the ball, but is deflected to the boundary. Russell seems to have injured his leg and has stepped out of the field.

IPL 2020 Live Score KXIP 3-0: Pat Cummins starts the proceedings for KKR. He has been in some decent form this IPL and would be looking for a few wickets. A good over comes to an end.

Hello and welcome to the second innings of the match. KXIP openers are out there in the middle. They would be hoping to get this target with rather ease.

IPL 2020 live score KKR 164-6: 9 runs come off the final over by Jordan which is fine for KXIP. But those runs leaked prior could be costly. A total in excess of 160 won't be easy to chase on this pitch, which is only going to get slower.

IPL 2020 live score KKR 155-5: Russell starts the penultimate over with a four by edging one to third man but edges one to the 'keeper on the next ball. Couple of wides follow and then Arshdeep puts the squeeze on nicely.

IPL 2020 live score KKR 145-4: FOUR, FOUR, OUT! Karthik gets two boundaries off Shami but Gill is run-out going for a second that didn't seem on. Excellent innings from the youngster comes to an end.

IPL 2020 live score KKR 133-3: FOUR, SIX, FOUR! Karthik slaps Jordan over cover for four then follows that with a lofted shot over long-off. He then edges one towards third man. 18 came off that Jordan over.

IPL 2020 live score KKR 115-3: FOUR, FOUR, FOUR! Karthik takes young Arshdeep on and spanks him for three boundaries. KKR's innings has some momentum now. A total of 160 would be defendable on this track.

IPL 2020 live score KKR 91-3: FOUR, SIX! That's the over KKR needed. Mujeeb has been unusually expensive and ends his spell in similar fashion. 16 runs come off his final over. Can they kick on from here?

IPL 2020 live score 63-3: OUT! Morgan goes for the big shot on the leg side off Bishnoi but only picks out Maxwell, who takes an easy catch. KXIP are back in the game now.

IPL 2020 live score KKR 60-2: SIX! Morgan launches a ball from Mujeeb over the deep mid-wicket boundary for a maximum. 11 comes off the over. KKR need more of this.

IPL 2020 live score KKR 49-2: Ravi Bishnoi comes into the attack and his first over is an excellent one, yielding just 4 runs. KXIP are doing well here but another wicket would be better.

IPL 2020 live score KKR 45-2: Jordan's second over gives away no boundaries but some smart running from Gill and Morgan sees them get 7 runs off it. KKR need a big partnership from these two.

IPL 2020 live score KKR 38-2: Mujeeb ur Rahman comes into the attack and his first over goes for 13 runs, including a boundary off Morgan. Not the start he wanted but exactly what the Knights needed after the poor powerplay.

IPL 2020 live score KKR 25-2: Morgan gets Shami away for a boundary but only two more singles come off the over. This is the second-lowest powerplay score in the tournament thus far.

IPL 2020 live score KKR 19-2: Chris Jordan comes into the attack and his first over is a decent one, going for just 4. KXIP are definitely on top here and will look to translate this pressure into more wickets. 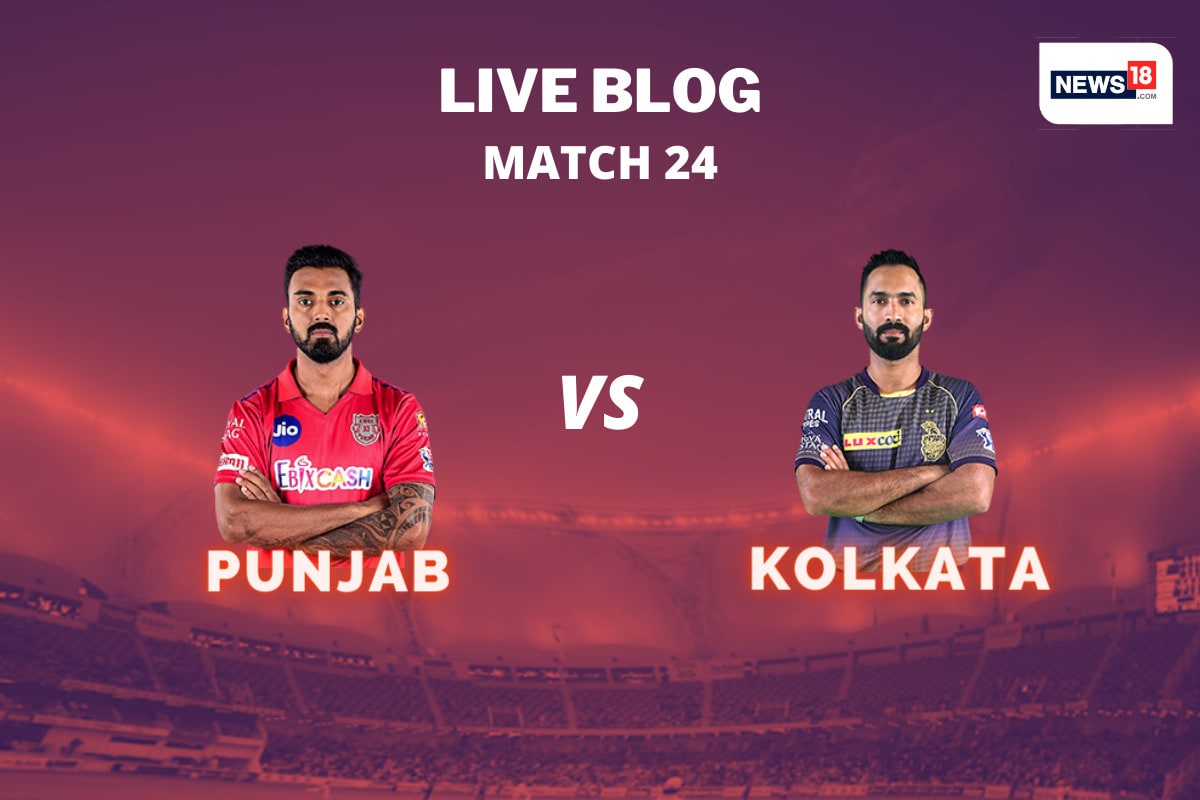 IPL 2020 Kolkata Knight Riders vs Kings XI Punjab, Latest Updates IPL 2020 Live Score - KKR WIN: Narine comes for the final over. Maxwell gets two from the first ball. He also gets a four from the third ball. Narine has a wicket here as Mandeep is caught in the deep. And the last ball ends in a four. KKR win by 2 runs.

PREVIEW:Kings XI Punjab (KXIP) will clash with Kolkata Knight Riders (KKR) in match 24 of the Indian Premier League (IPL) 2020 in Abu Dhabi on the 10th of October. KXIP need some inspiration. They showed a lot of promise at the beginning of the tournament but have now lost 4 matches on the trot. They are at the bottom of the points table with just one win from 6 matches. KKR have had a mixed bag so far in IPL 2020 – they have won 3 and lost 2 of their 5 matches. Mayank Agarwal has had a quiet three matches after starting the tournament with a bang. He is getting starts but is not able to convert them into the big match-winning scores. KL Rahul has suddenly decided to play the role of the accumulator and anchor – visible from his approach and drop in strike rate. This is turning out to be counter-productive for KXIP for Rahul was at his best when he was destructive – as he showed against RCB with his unbeaten 132 off just 69 deliveries. Nicholas Pooran gave a glimpse of his class against SRH. Glenn Maxwell needs to fire in the middle order. He has been poor in IPL 2020 scoring just 48 runs in 6 matches at a strike rate of 85.71. Mohammed Shami continues to lead the KXIP attack and is their leading wicket-taker with 9 wickets.

KKR need a collective effort from their top and middle order if they are to make it to the playoffs this year. Andre Russell – the most destructive batsman in IPL history, who was in devastating form in IPL 2019, has been completely out of sync in this edition. He has just scored 50 runs in 4 innings at a rate of 135.13 thus far. Skipper, Dinesh Karthik has also failed to yet produce a significant performance and has a strike rate of just 102.08 in the tournament. Another huge disappointment has been the form of Sunil Narine – he has just aggregated 44 runs in 5 innings with the highest score of 17 and strike rate of 110. Just for perspective, Pat Cummins has scored more runs in IPL 2020 than Russell, Karthik and Narine. Narine – the bowler – has also been a patch of himself. He has just picked 3 wickets in 5 matches and also gone at 8.33 per over.