IPL Highlights 2020, Sunrisers Hyderabad vs Chennai Super Kings, Latest Updates: IPL 2020 score: CSK win by 20 runs. SRH manage only 1 run in the last over, end with 147/8. CSK now have 3 wins from 8 matches, have started the second half of the tournament with a win. SRH too have 3 from 8 matches.

Ravindra Jadeja is the Man of the Match.

MS Dhoni: Ultimately, it's important to get 2 points. Today we did a very good job. There was some purpose with the batting. Batsmen assessed the situation very well. 160-odd, depends on the start. This was one game as close to perfect. Yes there were 1-2 overs that could have been better. It was a par score. I usually assess scores depending on the first six overs. A good score may become slightly not a par score because they got 15-20 more runs in the Power Play. A lot depended on the fast bowlers. I just told them to express themselves and hit the good areas. I felt what was needed was good execution of plans and that was done by the fast bowlers.We feature the extra spinner because the Indian batsman was not doing well. It wouldn't have been fair on a Jagadeesan to bat him at No. 7. Sam Curran is a complete cricketer. The way he's batting, he strikes the ball. He can get us a quick 15-35 or 40 runs. A left-armer is always good to have. As the tournament goes, he'll get better in death overs. We need to think more about the process. The points table will take care of itself. As the tournament progresses, there may be more and more pressure  on us. We can't brush aside areas just because we got 2 points today.

David Warner: The wicket was slow. We tried to take it deep, happens in cricket and we can't worry about it too much. It's not easy with the boundary size, you have to rely on power to hit boundaries in the middle. We have to go back to the drawing board and work on a couple of things. 160-odd was chaseable. With the depth we have, we have to monitor how the wickets unfold.

IPL 2020 live score: SRH 93/3 in 14 overs, chasing 168. Kane Williamson and Priyam Garg get one boundary each in that over off Dwayne Bravo. SRH making a move.

IPL 2020 live score: SRH 82/3 in 13 overs, chasing 168. Kane Williamson and Priyam Garg stitching together a partnership, as CSK bowl spin at either end.

IPL 2020 live score: SRH 76/3 in 12 overs, chasing 168. Kane Williamson with back to back boundaries off Jadeja. Some terrific, classy batting on display here. He's the key for SRH.

IPL 2020 live score: SRH 59/3 in 9.5 overs, chasing 168. WICKET - Ravindra Jadeja gets Jonny Bairstow. Superb bowling - skids this one, Bairstow looks to work it across and misses.

IPL 2020 live score: SRH 57/2 in 9 overs, chasing 168. Williamson and Bairstow in the middle of a good partnership at the strategic time out. Shardul Thakur has bowled one over.

IPL 2020 live score: SRH 52/2 in 8 overs, chasing 168. Williamson and Bairstow have run well between wickets. Jadeja comes on for his first over and concedes 6 runs.

IPL 2020 live score: SRH 40/2 in 6 overs, chasing 168. Kane Williamson is getting his eye in, gets another boundary in the over off Sam Curran. Curran has bowled 3 overs as well.

IPL 2020 live score: SRH 27/2 in 4 overs, chasing 168. WICKET - Manish Pandey run out. A direct hit from Bravo from mid off as Pandey looks for a quick single. Gone by miles! CSK strike back.

IPL 2020 live score: SRH 10/0 in 2 overs. Jonny Bairstow gets a boundary in that over off Sam Curran. SRH openers getting their eyes in.

IPL 2020 live score: SRH 4/0 in 1 over. Jonny Bairstow, David Warner safely negotiate the first over by Deepak Chahar. A little swing on offer.

IPL 2020 Live Score, CSK 167/6: That's it. 20 overs are bowled and SRH will be happy to restrict CSK to this score. At one stage they looked set for a 180-plus total. Outstanding bowling from Sandeep Sharma and T Natarajan.

IPL 2020 Live Score, CSK 152/4: SIX! Wow, that's Vintage Dhoni. What a shot over long on and Natarajan's smile tells everything.

IPL 2020 Live Score, CSK 138/4: End of the over and Sandeep Sharma finishes with the figures of 2-19! Not to forget the amazing effort he made to catch MS Dhoni.

IPL 2020 Live Score, CSK 120/4: WICKET! Watson is dismissed for 42 and it's almost a carbon copy of Rayudu dismissal. So SRH is back in the game with a bang. 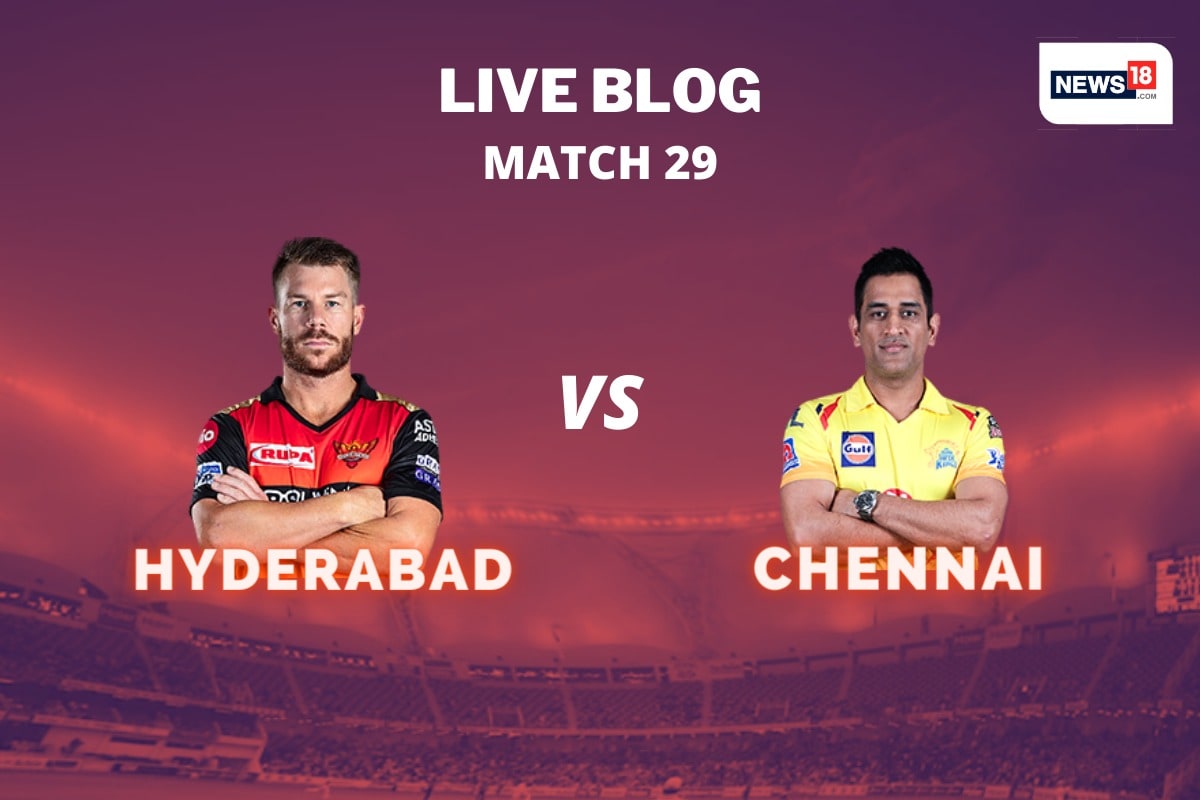 IPL Live Score 2020, Sunrisers Hyderabad vs Chennai Super Kings, Latest Updates: IPL 2020 live score: CSK win by 20 runs. SRH manage only 1 run in the last over, end with 147/8. CSK now have 3 wins from 8 matches, have started the second half of the tournament with a win. SRH too have 3 from 8 matches.

Once used to dominate this tournament, Chennai Super Kings will be up against Sunrisers Hyderabad in the return fixture of the Indian Premier League. When last time these two teams met it was SRH that came up trumps. Will CSK exact a revenge and turn things around?

When MS Dhoni and his Chennai Super Kings landed in Dubai a month ago, not in their wildest dreams they would have thought that they will be struggling to make it into the top-four of the Indian Premier League.

SRH are having a roller-coaster of a season. But probably they will relish taking on a wounded CSK in the return fixture so that they can mend their ways as soon as possible.

They are clearly not a team which has a battery of explosive hitters but the likes of Priyam Garg and Manish Pandey can shake things up a bit. Not to mention David Warner and Jonny Bairstow at the top are in sublime form.

T Natarajan can be the x-factor with his yorkers but barring him the likes of Khaleel Ahmed, Siddharth Kaul and Sandeep Sharma are yet to cement their places in the squad. Warner has rotated them and this shows that he is  struggling to fill the void that has opened up after Bhuvneshwar Kumar was ruled out due to injury.