IPL 2020, SRH vs KKR in Abu Dhabi Highlights: As it Happened

Kolkata tied with Hyderabad (Kolkata win Super Over by 2 wickets)

KKR WIN: Rashid Khan will try and defend three wins. Dinesh Karthik and Eoin Morgan bat out to bat. A dot ball to start with for Rashid. The next ball fetches one run. And KKR win.

IPL 2020 live score SRH 2-2: Ferguson goes for the top of off, and he hits. Warner is out for first ball. Disastrous start here for SRH. Samad comes out to bat now. And Lockie has wrapped it up with another wicket. This time Samad is out.

SRH to bat first and Bairstow and Warner come out to bat. Ferguson has the ball in his hand.

IPL 2020 live score SRH 163-6: Russell starts the last over and he starts with a wide. Oh no, that's a no ball. Free hit results in one run only. But the next ball Warner gets a four. And now another four, this time in front of the bowler. This is three in a row now. And the match has ended in a tie. Super over now.

IPL 2020 live score SRH 146-6:  Ferguson can do no wrong tonight. He takes an excellent catch on the boundary to get rid of Samad. This is getting tough for SRH as they need 18 from 7.

IPL 2020 live score SRH 146-5: Mavi comes on for the penultimate over. And he is creamed for four on the first ball. But still the pressure is on SRH. Warner too gets a four on a full toss.

IPL 2020 live score SRH 127-5: Chakravarthy starts the 17th over. Samad is the key man here and he gets a four. This is all happening for SRH. Anybody's game now.

Where is the game headed?

IPL 2020 live score SRH 109-5: Another one bites the dust, and this time it is Vijay Shankar. SRH in deep trouble here as they have a mountain to climb.

IPL 2020 live score SRH 100-4: SRH is in trouble here. They have lost a few wickets in a hurry and all up to Warner to take the side home. But 11 runs come from Cummins' over.

IPL 2020 live score SRH 82-4: Ferguson gets a quick yorker land perfectly. Pandey is castled and SRH are in deep trouble here. They are losing wickets in a bunch here.

IPL 2020 live score SRH 80-3: Now Kuldeep Yadav comes into the attack. On his very first ball he nearly had Warner stumped. He is looking refreshingly good. A good over comes to an end.

IPL 2020 live score SRH 70-3: What is happening here. Varun Chakravarthy tosses the ball up and Bairstow takes him on. Russell takes a good catch in the deep.

IPL 2020 live score SRH 70-2: Lockie has another wicket, this time from a slower ball. Priyam Garg tries to cut and doesn't judge the pace of the ball right. He is castled.

IPL 2020 live blog SRH 57-1: Ferguson comes into the attack and gets a wicket on the first ball. Williamson tries to cut, but is caught at deep point by Nitish Rana. He is out for 29.

IPL 2020 live score SRH 57-0: Mavi continues and is hit for a six on the second ball. It's a scoop by Williamson. And now Bairstow ends the over with a cut that goes for a four.

IPL 2020 live score SRH 46-0: These two SRH openers are looking very dangerous, getting boundaries at will. And a short one is dispatched for a four by Bairstow at the end of the innings.

IPL 2020 live score SRG 35-0: Andre Russell comes into the attack now and he is welcomed with a four by Williamson. Both these batsman would not look to run a lot but deal in boundaries. And then Bairtsow too gets a four over fine leg. He ends the over with a pull for a four.

IPL 2020 live score SRH 12-0: Shivam Mavi to bowl the second over. Kane Williamson too is not looking a 100% here. This could be trouble for SRH early on in the innings. He creams the ball though, through the off side. And make it two in the over. 10 runs from the over here.

IPL 2020 live score SRH 2-0: Pat Cummins starts the proceedings for KKR. It looks like a good batting wicket. And he starts with four dot balls, this is good bowling. So just two runs come from the over.

And on to the second innings here. David Warner is not opening the innings here and Kane Williamson will open with Bairstow.

IPL 2020 live score KKR 163-5: Morgan begins the final over by running 2 and then Morgan follows that with a boundary. Morgan takes another two before slamming one over deep square leg for a maximum! Another two follows before the over ends with Morgan holing out to long-off.

IPL 2020 live score KKR: FOUR, SIX! Karthik begins the penultimate over with a four straight down and ends the over with a six over long on! 14 runs come off the over, exactly what KKR needed.

IPL 2020 live score KKR 133-4: SIX! Karthik gets a maximum over deep square leg, the ball just clearing the boundary ropes. 12 came off the over thanks to some good running.

IPL 2020 live score KKR 121-4: FOUR, FOUR! Morgan edges one past the 'keeper while going for a slog down the ground. Well, they all count. Karthik ends the over with a punch through covers that finds the gap and runs away.

IPL 2020 live score KKR 111-4: Sandeep comes back into the attack for his third over and it is a decent one that goes for just 6. Time-out is taken now.

IPL 2020 live score KKR 105-4: OUT! Russell goes for the big shot off Natarajan but finds Shankar in the deep. The all-rounder looks devastated. KKR are in trouble.

IPL 2020 live score KKR 96-3: Rashid finishes his spell with a good over that goes for just 3. The key now will be how the pacers deal with the remaining 6 overs against two players who like pace.

IPL 2020 live score KKR 93-3: FOUR! Russell stretches to smack one that is outside off by Shankar and manages to get off the mark with a boundary. KKR will expect a lot from him and Morgan now. 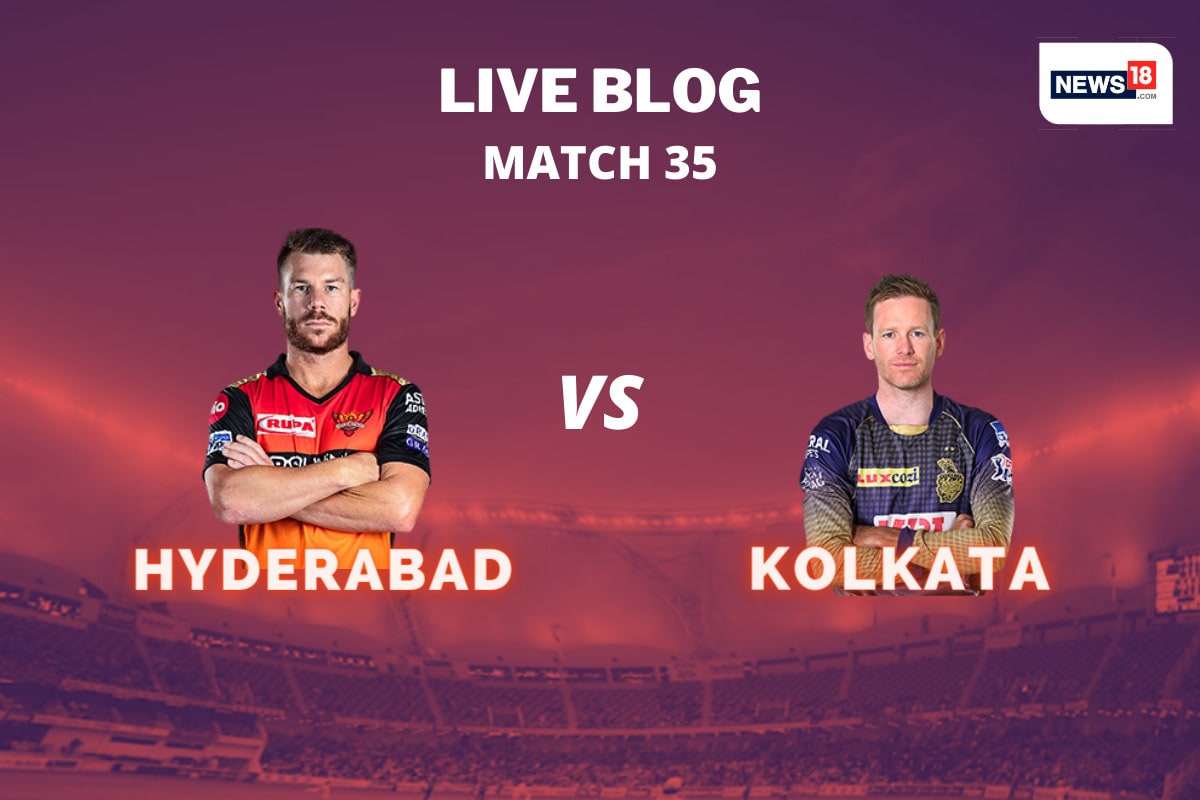 Sunrisers Hyderabad (SRH) will clash with Kolkata Knight Riders (KKR) in match 35 of the Indian Premier League (IPL) 2020 in Abu Dhabi on Sunday, 18th October. SRH, with 5 losses from 8 matches, are at number 5 on the points table while KKR are at number 4 with 4 wins and as many losses from the same number of matches. A fine all-round bowling effort from the KKR bowlers restricted SRH to 142 for 4 in Abu Dhabi – in the first encounter between the two teams in IPL 2020. Shubman Gill remained unbeaten on a fine 70 off 62 deliveries to take KKR to a comprehensive 7 wicket win with two overs to spare. SRH have lost their last couple of matches and need a win to ensure they do not fall too behind in the pecking order. David Warner is their highest scorer of the tournament with 284 runs but his strike rate of 121.88 tells the real story – it has largely been a struggle for the SRH captain in IPL 2020. Jonny Bairstow has fallen off the boil in the last couple of matches – he has got starts but been sluggish and then failed to register a substantial score.

Rashid Khan will continue to hold the key to SRH’s bowling – he is their leading wicket-taker with 10 wickets in 8 matches conceding at a rate of just 5.34 runs per over. SRH will rely on him to not only check the flow of runs in the middle overs but also provide them with crucial breakthroughs. KKR have been poor in their last couple of matches and been thrashed by RCB (by 82 runs) and MI (by 8 wickets). The batting is a huge concern for KKR. No one, with the exception of Shubman Gill, is scoring any runs for the team in the top-order. Eoin Morgan has been a patch of the T20 specialist he is known to be with no fifties and scoring at a rate of just around 130. Pat Cummins has aggregated more runs than Andre Russell and Dinesh Karthik – this tells a story or two about the terrible form the West Indian all-rounder and wicket-keeper have been in this edition. Russell, who was in devastating form in IPL 2019, has just mustered 83 runs in 7 innings this year.