IPL Playoffs 2020: Here’s How Royal Challengers Bangalore Created Their Road To The Playoffs

RCB qualified for the playoffs despite a six-wicket loss to Delhi Capitals (DC), just on the virtue of better NRR than Kolkata Knight Riders. Even though Royal Challengers Bangalore (RCB) started their Indian Premier League (IPL) 2020 season opener with a win and they very well maintained that streak, until their slump in the end of the league matches. In the last league match of the IPL, RCB qualified for the playoffs despite a six-wicket loss to Delhi Capitals (DC), just on the virtue of better NRR than Kolkata Knight Riders.

Here’s a look at their performance leading to the playoffs:

RCB registered their first win in the season opener against Sunrisers Hyderabad. They set a target of 164-runs and ensured SRH didn’t chase it. Yuzvendra Chahal picked three wickets, while Shivam Dube and Navdeep Saini picked two wickets each, which led to a batting collapse.

Kings XI Punjab (KXIP) drew first blood against RCB as they handed a 97-runs loss to Virat Kohli’s squad. KXIP posted a mammoth total of 206 runs at the loss of three wickets. RCB’s top order failed to make an impact with the bat and the rest of the batting order didn’t impress either. KXIP bowlers gave a tough time to RCB and their chase ended at 109.

RCB won the match in a deciding Super Over against the Mumbai Indians. RCB posted a total of 201, which Mumbai team chased and levelled. However, the game went down to super over and Mumbai could not perform well with the bat and scored just seven runs, losing one wicket. Bangalore chased the target comfortably, winning the match.

Royal Challengers Bangalore (RCB) sealed their third win of the season as they beat Rajasthan Royals (RR) by eight wickets. RCB chased the total of 155 runs with AB de Villiers stepping in to finish things off with a four from the first ball of the 20th over.

Shreyas Iyer led Delhi Capitals got the better of RCB by 59 runs at the Dubai International Stadium. DC posted 196 to win, as RCB witnessed a dramatic batting collapse and Bangalore’s innings ended on 137 with only one wicket remaining.

Virat Kohli not only pitched in to help his squad post 169 for four at the end of 20 overs, but his team went on to beat the formidable Chennai Super Kings by 37-runs. RCB posted 169/4, RCB bowlers kept things tight for CSK throughout the match. With CSK needing 53-runs from the last two overs, RCB conceded just 15-runs to seal their fourth win.

RCB registered their fifth win of the season from seven matches. In the 28th match of the IPL 2020, they beat Kolkata Knight Riders (KKR) by 82-runs. RCB bowlers again showcased one of their best performances as they restricted KKR to 112 at the loss of nine wickets. Barring Shubham Gill’s 34 from 25 balls, Kolkata’s eight out of 11 players scored below 10 runs. 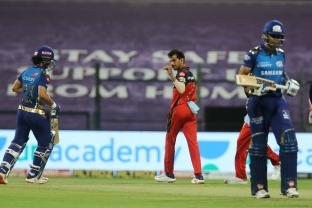 IPL 2020: Why Yuzvendra Chahal Has Been Successful This IPL, Explains Scott Styris

Replicating their previous win against Kolkata Knight Riders, RCB went a step ahead by restricting KKR to a paltry total of 84 for eight, the lowest in this tournament. RCB chased the total in 13.3 overs losing two wickets.

Chennai Super Kings settled the score of their previous defeat as their bowlers restricted RCB to 145 at the loss of six wickets. MS Dhoni-led CSK chased it comfortably in 18.4 overs, sealing an eight-wicket win with 8 balls to spare.

The Mumbai Indians recorded their eighth win of the tournament, as they went on to defeat RCB by five wickets. Needing 165 to win, Mumbai chased it in 19.1 overs. This was the second consecutive loss for RCB. 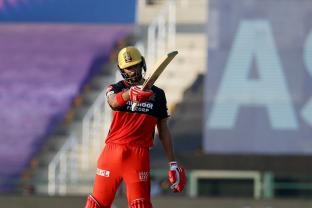 Sunrisers Hyderabad settled the score of the previous defeat as they outperformed RCB and handed them a five-wicket loss. SRH restricted RCB to 120, which they comfortably chased in 14.1 overs.

Delhi sealed their spot in the playoffs as they defeated RCB by six wickets. Even though RCB ensured DC did not chase down the target in 17.3 overs, they too made it to the playoffs and joined DC and Mumbai Indians in the playoffs on the virtue of NRR.