After a string of good performances from Kolkata Knight Riders and Mumbai Indians, there is already a healthy gap between the top two teams and the rest.

New Delhi: The second week of the tenth season of the Indian Premier League (IPL) is over and the league table is starting to take a decent shape now. After a string of good performances from Kolkata Knight Riders and Mumbai Indians, there is already a healthy gap between the top two teams and the rest. Let’s take a look at who are the big movers and shakers in the second week of the league.

Let’s start with the current table-toppers — Kolkata Knight Riders. The two-time champions turned their fortunes around the the second week after a lackluster first two matches in the tournament. KKR were placed fourth in the league after winning one and losing one in the first week. However, in the next three matches, Gautam Gambhir’s troops beat the likes of Kings XI Punjab, defending champs Sunrisers Hyderabad and Delhi Daredevils to lead the charts.

Mumbai Indians too have turned their fortunes around spectacularly in the league. After losing their first match convincingly to Rising Pune Supergiant, Mumbai have won four matches on the trot and are level with points with KKR at the top. Kolkata, Hyderabad, Bangalore and Gujarat have been blown away by Mumbai resurgence in the league in week two of the league.

Meanwhile, Sunrisers Hyderabad set the pace early on by winning their first two matches against RCB and GL. However, David Warner’s men lost two on the trot to Mumbai and Kolkata respectively to lose some momentum. But SRH edged out KXIP on Monday to be placed at number three in the table after playing five matches.

Delhi Daredevils haven’t moved up or down in the table after week two and occupy the number four position in the league once again. After losing their first match of the season to RCB, DD won two consecutive matches against RPS and KXIP to gain some momentum. However, Zaheer Khan’s men are back to square one after losing their latest contest against KKR on Monday.

Kings XI Punjab are the biggest losers of week as from first position, they have dropped to fifth in the league. The team which seemed invincible after winning its first two encounters, KXIP lost all three games in the second week to KKR, DD and SRH respectively.

There is no change in the bottom three as Bangalore, Pune and Gujarat occupy the sixth, seventh and eighth position respectively in the league. 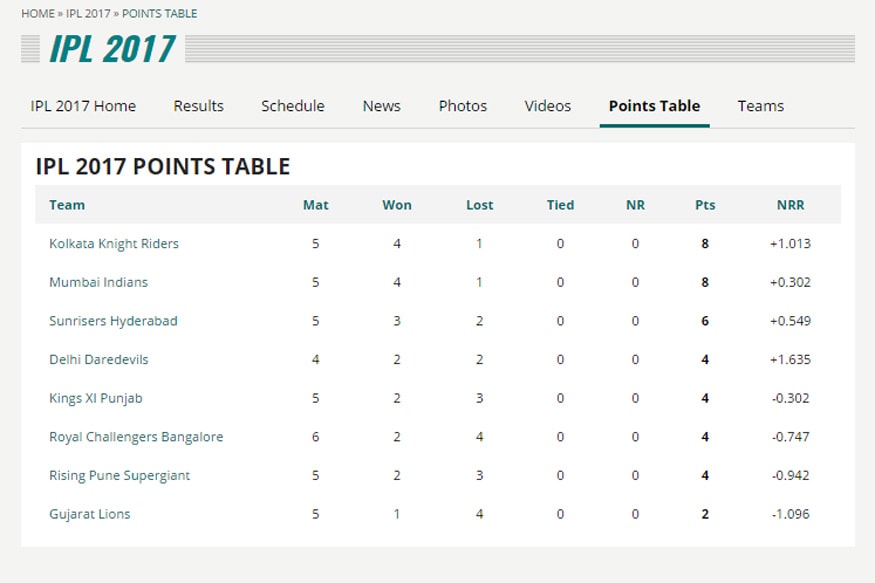