Back to News18
Home » Cricket Home » News » Is Jasprit Bumrah the Undisputed King of Death Bowling in T20Is?

Is Jasprit Bumrah the Undisputed King of Death Bowling in T20Is?

Pacer Jasprit Bumrah could well be called the undisputed king of death bowling after his heroics in the final over of the nail-biting second T20I against England at the Jamtha Stadium in Nagpur on Sunday. 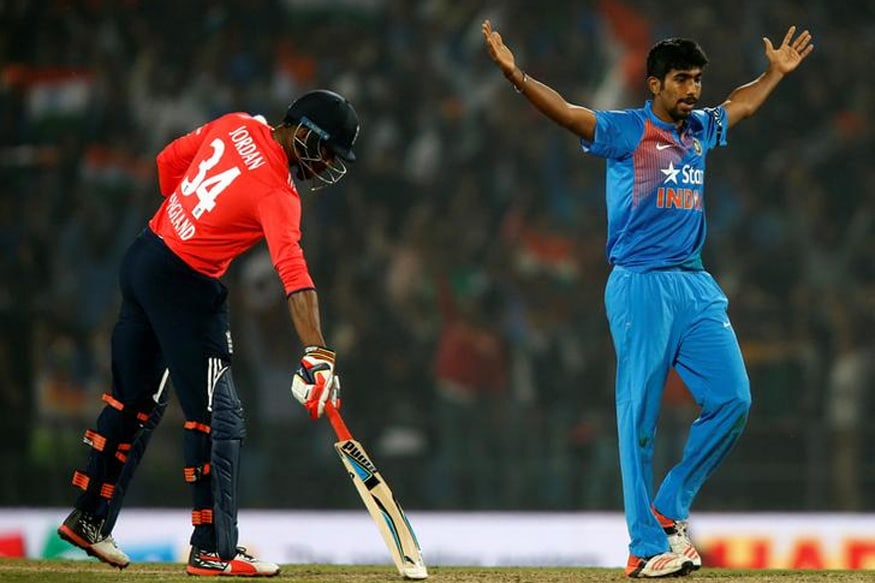 New Delhi: Pacer Jasprit Bumrah could well be called the undisputed king of death bowling after his heroics in the final over of the nail-biting second T20I against England at the Jamtha Stadium in Nagpur on Sunday.

Needing 24 off 12 balls, England were on course to win the game and with it the series after scoring 16 runs from Ashish Nehra’s penultimate over.

Needing 8 to win off the last over, the visitors looked all but home before Bumrah struck. Bumrah decided to rise to the occasion and show the world why he is one of the most dangerous bowlers at the death.

Bumrah gave away just two runs and picked the crucial wickets of Joe Root and Jos Buttler as India won the game by five runs and levelled the series 1-1.

CricketNext takes a look at the Top 3 performances by Indian bowlers in the final over of a T20I:

The momentum was clearly with England after they collected 16 runs off Ashish Nehra’s penultimate over, but Bumrah had other ideas. He used the conditions to his advantage to mix up the slower cutters and the quicker ones to not only dismiss the in-form Joe Root and Jos Buttler, but also take India home. In the end, England could manage to score just two runs from the last over. Credit to Nehra for continuously guiding him, but then, it was Bumrah who had to put the ball in the right areas and the youngster held his nerve to once again prove that he is the best in the business when it comes to the death overs.

The game was there for the taking, but the Bangladesh batsmen decided to go for glory rather than playing it safe. And the end result was a near improbable win for the hosts and a place in the knockout stages of the World T20 at home. Needing 11 to win from the last over, all Bangladesh managed was nine runs and lost three wickets as they panicked. With 8 runs already collected from the first three balls, it was a situation that called for a calm approach. But the Bangladesh boys looked to end the game with a bang and perished in the process.

It was the high-octane final of the inaugural World T20 and it couldn’t get better than arch-rivals India and Pakistan clashing to bring an end to a hugely successful event. But newly appointed skipper MS Dhoni decided to make it a blockbuster one as he didn’t give up even as Pakistan required 13 runs from the last over. With the world watching with baited breath, Dhoni turned to Joginder Sharma after Harbhajan Singh said he wasn’t confident of landing the yorkers in the right areas. The rest as they say is history. Joginder dismissed Pakistan skipper Misbah-ul-Haq off the third ball of the final over as India romped home.