The architect of New Zealand's colossal achievement, for a country whose population is barely a fourth of the population of Delhi, inspiring them with his batting and astute leadership on the field was their captain Kane Williamson

New Zealand have completed a stunningly successful run at home routing Pakistan by an innings and 176 in the second Test at Christchurch. The win meant that New Zealand have won 6 Tests on the trot and more importantly swept three successive home series. Even more significantly, they have now moved to Number 1 in the ICC Test Rankings for the very first time in their history and have a very high probability of making it to the final of the World Test Championship at Lord’s in June 2021.

New Zealand Become No.1 in Tests for The First Time After Series Sweep Against Pakistan

The architect of this colossal achievement, for a country whose population is barely a fourth of the population of Delhi, inspiring them with his batting and astute leadership on the field was their captain Kane Williamson. The New Zealand great is the highest scorer in Test cricket since 2020 with an aggregate of 736 runs in 5 Tests (7 innings) at an average of 105.14 including three hundreds and a fifty. 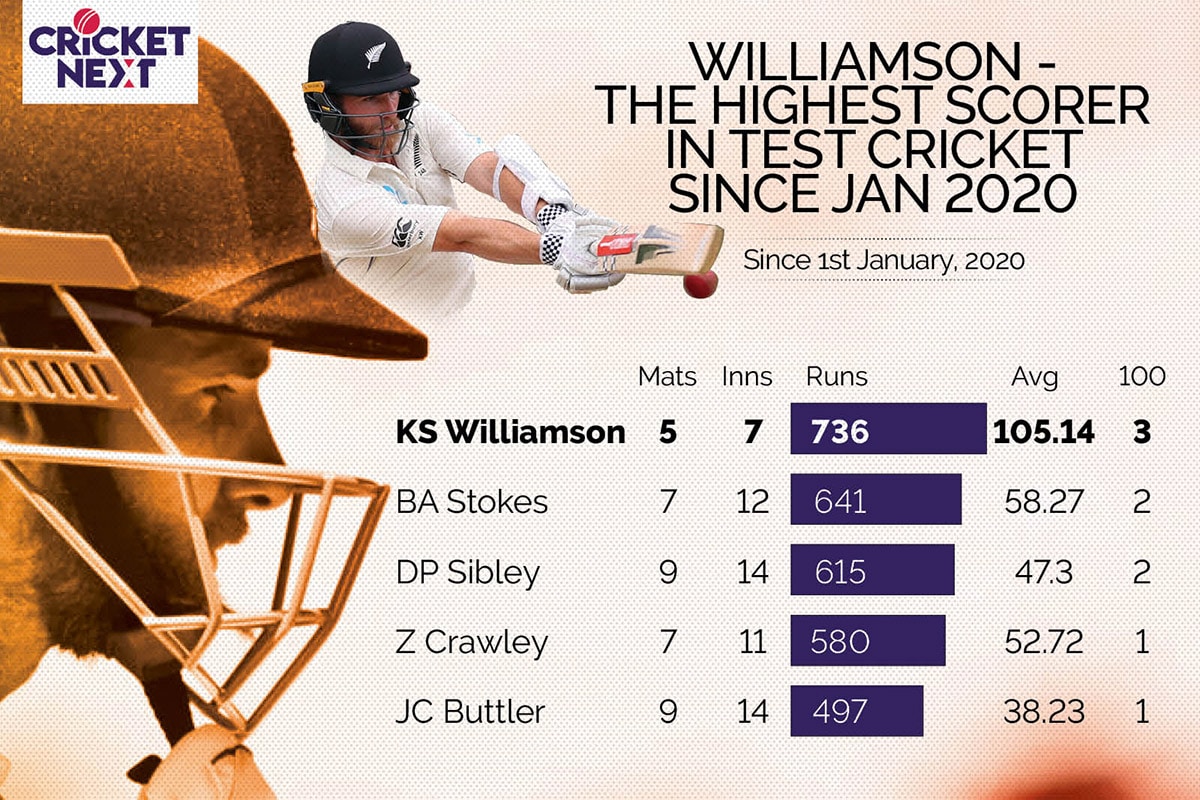 Williamson scored an under-pressure 129 in the first innings against Pakistan at Mount Maunganui helping New Zealand to a big total – the home team went on to win a thriller of a Test late on Day 5. He again weathered the storm when New Zealand lost quick wickets in the first innings and were in a spot of bother at 71 for 3 in Christchurch. Williamson combined with Henry Nicholls and put together a record 369-run stand for the fourth-wicket – the third-highest partnership in New Zealand’s Test cricket history! New Zealand piled on 659 with Williamson registering his fourth double hundred – a magnificent 238 off 364 deliveries. Pakistan crumbled under pressure and lost the Test by an innings.

Barely a month back, Williamson had recorded the second-highest individual Test score of 2020 when he scored a massive 251 in an innings win over the West Indies in Hamilton. Earlier in the year in February, he had scored a fine 89 (top-score of the innings) helping his side to a massive and decisive first innings lead in the series opener against India in Wellington.

In comparison to Williamson, the two greats – Steven Smith and Virat Kohli – widely regarded as the two best Test batsmen by a number of cricket experts and pundits across the world – have had a mediocre run in Test cricket. Steven Smith has registered scores of 1, 1 not out, 0 and 8 in the 4 innings he has batted so far in the Test series against India. His average of 3.33 is the lowest for Smith in the first two Tests of any series he has been part of in his Test career – in other words this is Smith’s worst start to any Test series in his career. Since his double hundred in Manchester in September, 2019, Smith has witnessed a big slump in his Test numbers – the Australian has aggregated just 367 runs in 8 Tests (13 innings) at an average of 30.58 with no hundreds and only three fifties in this period.

King Kohli had a modest 2020 across formats – it was the only year apart from 2008 (his debut year) in which he did not register an international hundred! He had an aggregate of just 842 runs in 22 matches (24 innings) at an average of 36.6  with no hundreds and 7 fifties in the calendar year. His Test numbers were even poorer in 2020. Kohli scored just 116 runs in 3 away Tests at an average of 19.33 with one fifty in the year.

Williamson has been bossing both Smith and Kohli for a couple of years now. In fact, his batting average of 73.52 is the highest in the world (min. 500 runs and 8 innings) since the 1st of January, 2019 – that is how good the New Zealander has been in this time frame. 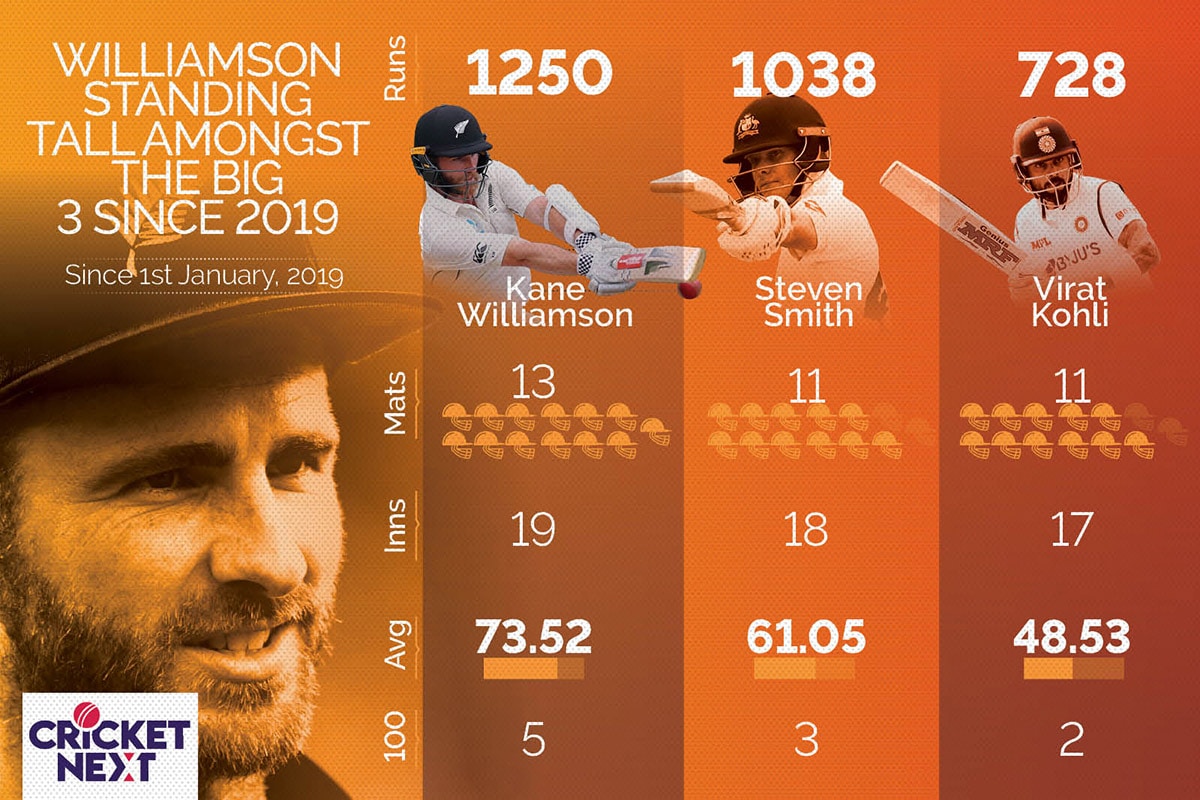 Williamson has an aggregate of 1250 runs in 13 Tests (19 innings) including 5 hundreds and 3 fifties since 2019. He has the ability to score big hundreds – three of his 4 Test double centuries have been recorded in this time-frame! He has been consistent with a failure rate (percentage of innings dismissed below 20) of 42%. Even more significantly, he has scored 86.48% of his runs in victorious matches for New Zealand. Williamson has an average of 108.1 in such matches and 4 of his 5 hundreds in this time-frame have contributed to a New Zealand win.

Williamson’s Test average of 54.31 is the highest in New Zealand’s cricket history. He has shown, in the last couple of years, as he has throughout his career, that he has the skills, temperament, ability and the numbers to compete with the best in the world and even surpass them – he is now the number one Test batsman in the world ahead of Kohli and Smith who follow. Not belonging to the Big 3 cricketing nations means that he does not have the same limelight as the other two and media attention that he deserves.

But his record and achievements and performances on the field are a testimony of his greatness. It is high time that the cricketing world gives him his due.