England will need to win the series or draw it in order to qualify. India can manage to qualify with one win and one draw as well. 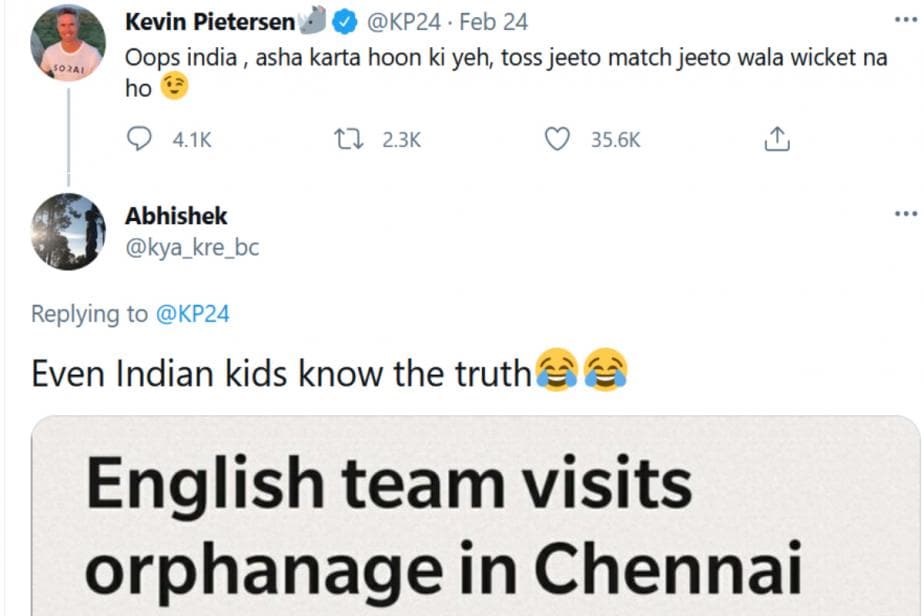 Former English skipper Kevin Pietersen has been firing shots on Twitter about team India in Hindi and Indian fans are here to take him down. Ever since the iconic Indian win at Gabba during the Border-Gavaskar Test series, Pietersen has been tweeting snide remarks (all in good fun, hopefully) on his Twitter handle. Some comments are generally very light-hearted and people appreciate it, but the latest one has people trolling him endlessly. His latest remarks were in regard with India vs England Test at the Motera Stadium,which has been renamed as Narendra Modi Stadium this week.

Pietersen, who is now retired to become a sort of full-time Twitter cricket commentator, has had some thoughts since the pink-ball Test began. “Oops india, asha karta hoon ki yeh, toss jeeto match jeeto wala wicket na ho,” Pietersen wrote, followed by a wink emoji. Translation says, “Oops India, I hope this wicket (pitch) isn’t the one where winning the toss means winning the game.” The English team had a spectacular fall of wickets on the first day of the 3rd Test. The team went all out at a meagre score of 112 runs, which the Indian team ended with 99/3.They won the toss but lost the game.

The Test series has a total of 4 matches and the teams are currently tied at 1-1. In the International scorecard of Test Rankings; India is currently at the second position while England occupies the fourth rank.

Fans of team India rushed in with their responses.

Please confirm Sir is this team England’s A or B team ? pic.twitter.com/ir9ZQTDETQ

This fan twisted Pietersen’s own words against him.

Asha karte hai. @englandcricket team will not be sore losers. @benstokes38 already cheating after claiming a dropped catch and @jimmy9 @StuartBroad8 bullying the on field umpires.

Oops england, hope this doesnt kick you out of the test championship pic.twitter.com/dKcvNt489R

The tweet is in reference to the ICC International Test Championship. As New Zealand leads the Test rank-table, they are already in the final. The result of Ind vs Eng Test series going on right now will decide the next championship contender. Before the series even began, Captain Joe Root told in an interview that “Our goal is to qualify for the ICC World Test Championship Final.”

England will need to win the series or draw it in order to qualify. India can manage to qualify with one win and one draw as well.