Pollard stood out with his performances with the bat and was the highest scorer for Trinidad and Tobago in the 2009 Champions League T20 helping them finish runners-up. Something had to give!

West Indies had the seventh-worst win-loss in T20I cricket (amongst the 9 major teams) post their famous win in India in the World T20 in April, 2016. They also had the worst ODI ratio amongst these teams post the 2015 World Cup and finished second-last only above Afghanistan in the 2019 edition in England.

A change was needed at the top. A new approach, a new line of thought and a new brand of cricket, perhaps – the buck stops with the leadership and thus it was not surprising that Kieron Pollard was named captain of the West Indian limited overs’ sides.

So what does Pollard bring to the table? Why was he chosen to lead the West Indies in white ball cricket?

Statistically, he is the perfect choice. Pollard has played a record 481 T20 matches (domestic and international) in his career – no one in the history of the format has played more! He has a wealth of experience in T20 cricket having played in all the major leagues around the world – IPL (India), BBL (Australia), CPL (West Indies), PSL (Pakistan), Ram Slam (South Africa) and the Global T20 league (Canada).

Pollard is the third-highest scorer in T20 cricket history (after Chris Gayle and Brendon McCullum) with 9537 runs at an average of 30.46 and strike rate of 149.81. His exploits include one hundred and 47 fifties.

Although Pollard does not have a great T20I record – 903 runs in 53 innings at an average of 21.5 and strike rate of 125.41 with 3 fifties, he has played some cameos for the West Indies in the format. Perhaps his most important knock for the West Indies was his 15-ball 38 against Australia (propelling the score to 205) in the semi-final of the World T20 in Colombo in 2012. West Indies went on to win the tournament.

It is in the domestic T20 leagues all over the world where Pollard has shown his mastery and made a name for himself as a specialist in the format.

Pollard stood out with his performances with the bat and was the highest scorer for Trinidad and Tobago in the 2009 Champions League T20 helping them finish runners-up.

But his most successful stint has been for Mumbai Indians (MI). Pollard is the most-capped player for the franchise and their second-highest scorer in history (after Rohit Sharma) with 3258 runs in 157 innings at an average of 28.83 and strike rate of 146.49, including 16 fifties.

He has also picked 66 wickets for MI at a respectable strike rate of 21.5.

Pollard aggregated 1225 runs from 60 T20 matches in 2017 playing for Adelaide Strikers, Barbados Tridents, Mumbai Indians, Dhaka Dynamites, Karachi Kings and the West Indies. What stood out was his strike rate of 147.76.

Coming down the order, his ability to play that destructive match-changing innings makes Pollard one of the most dangerous T20 batsman in the world. 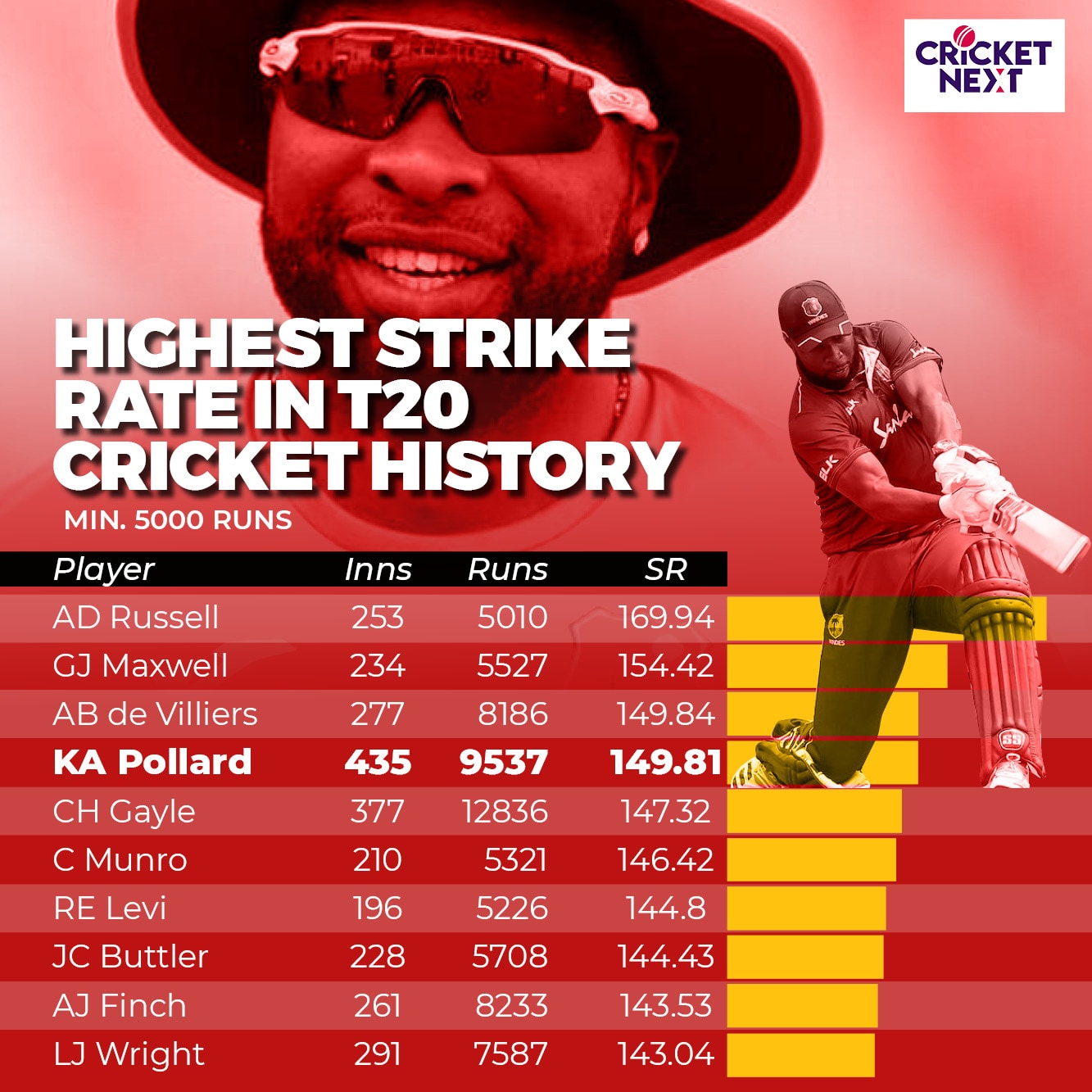 Pollard also has some experience in leading a side. A glimpse of his innovative captaincy was seen in MI’s match against Kings XI in Mumbai in the 2019 IPL. Chasing a daunting 197, Pollard, captaining the side in place of Rohit Sharma, promoted himself to number 4 and blasted a match-winning 83 off just 31 deliveries to take MI home by 3 wickets.

He top-scored for MI in the 2019 final scoring 41 off just 25 deliveries in a low-scoring match.

Pollard captained Barbados Tridents for 5 years leading them to the CPL title in 2014. He has also captained St Lucia Stars and has recently replaced Dwayne Bravo as the skipper of Trinbago Knight Riders for the remainder of this season.

Although Pollard last represented West Indies in ODI cricket in October 2016, he has the experience of playing 101 matches, including two World Cups.

His career longevity (of more than 13 years), experience of playing in various leagues and conditions all over the world with the top players of his times, performing in crunch situations along with his devastating record in T20 cricket make Pollard an ideal choice to lead the West Indies.

With two back to back World T20 tournaments scheduled for 2020 and 2021 followed by the World Cup in India in 2023, Pollard could just ignite that spark and firepower the West Indies team so desperately needs at the moment.