Thata wrap from our side, but do join us in the next match. Bye for now.

That's an end to a superb game of cricket. what a comeback from Knightriders here. They were 32/5 at one stage and then came the counter-attack from Pat Cummins and Anrdre Russell that almost puched CSK to the brink. But MSD must be glad that CSK were able to run out Prasidh Krishna.

Live Score KKR vs CSK: KKR 200 All out. And CSK have survived Pat Cummins scare. Prasidh Krishna is runout and KKR are bundled out for 200 runs. Not to forget what a comeback they staged. They were once 32/5.

Live Score KKR vs CSK: KKR 182-8 (17): FIFTY from Pat Cummins. “This is the same attitude and same intensity I carry in every game. I think it was holding up initially for the spinners and even now, this will be a very good score to defend.”

Live Score KKR vs CSK: KKR 176-7: That's a massive over for KKR. As much as 30 runs coming off it and Pat Cummins is the man who turned the heat here. Can KKR pull off a win here.

Live Score KKR vs CSK: KKR 146-7: WICKET---That's a brilliant slower ball and Ngidi gets dangerman Dinesh Karthik. CSK are knocking the fight out of KKR.

“First three games I did not get a good start and thankfully I got a start today. When you have such experienced players in the dressing room, it makes your job easy.“To be honest (they spoke) nothing much, they just kept backing me and even that small innings in the last game they found some positives. They knew there were 1-2 good deliveries, the confidence was always there and when other players came up to have a chat, it feels really good.

KKR vs CSK live score: KKR 123/6 (12)---WICKET. Andre Russell is bowled around his legs. What a ball from Sam Curran. Russell was looking dangerous and Sam Curran gets his man. But DK finishes this over with a boundary.

Live Score KKR vs CSK: KKR 97-5 (Overs 10): Andre Russell is going after CSK here. Remember KKR had lost half their side and now Russell conter-attacks and so does DK.

Live Score KKR vs CSK: KKR 73-5 (Overs 9)---With Robin Uthappa waiting in the bench, CSK resisted their temptation to replace the youngster with the veteran. After his innings, Gaikwad said the team management – MS Dhoni and Stephen Fleming – did not say much to him after the failures.

Rahul Tripathi repaid Chennai Super Kings’ extended faith in him in the IPL 2021 match against Kolkata Knight Riders, scoring 64 off 42 to set up their total of 220 for 3 at the Wankhede stadium in Mumbai on Wednesday. Prior to the match, Gaikwad had made scores of 5, 5, and 10 averaging just 6.67 after three games.

Live Score KKR vs CSK: KKR 31-5 (Overs 5): WICKET not one but twice in space of ten balls. As expected Sunil Narine threw it away and helped Deepak Chahar get a four for and then Lungi Ngidi bowled a stunning delivery to dismiss Rahul Tripathi. KKR are down in the dumps.

KKR vs CSK live score: KKR 27/3--WICKET.....And here we go Deepak Chahar gets skipper Eoin Morgan. Bowls an away swinger and Morgan edges this one.

Live Score KKR vs CSK: KKR 22-2 (Overs 4): Five runs coming off that over but thanks to Shardul Thakur's misfield. Deepak Chahar has already picked up two and he has bowled two overs so far. Here we go..he is back again.

KKR vs CSK live score: KKR 17/2 (Over 3): WICKET and another one from Deepak Chahar who swings it away again. Rana who was looking iffy right from the start just  guides it into the air and MS Dhoni completes a stunning catch.

Live Score KKR vs CSK: KKR 14-1 (Overs 2): That's a nice comeback from KKR. Rahul Tripathi has a certain spark in him. He comes in and attacks right from the word 'go'.

Live Score KKR vs CSK: CSK 220-3 in 20 overs. CSK end with 220 as Pat Cummins concedes 19 in his last over, including three sixes. Last one was a drop catch from Nitish Rana though. Faf du Plessis, meanwhile, ends on 95 off 60. Missed his century by one shot!

Live Score KKR vs CSK: CSK 186-2 in 18 overs. MS Dhoni is back to his swinging best? Not really, but he manages a six and a four off Prasidh Krishna in the 18th over. CSK heading for 200+

Live Score KKR vs CSK: CSK 155-1 in 16 overs. 11 runs from Prasidh Krishna's over, including a six and a four. Which means three dot balls. CSK need a big finish against this KKR batting unit.

KKR vs CSK live score: CSK 130-1 in 14 overs: Kamlesh Nagarkoti concedes 10 in his second over, with Moeen Ali finding the boundary once.

IPL 2021 live score: CSK 115 for 1 in 12.2 overs. WICKET - Ruturaj Gaikwad attacks Varun Chakravarthy and is caught in the deep. 64off 42, a good knock from the youngster. Has set a superb platform.

KKR vs CSK live score: CSK 115-0 in 12 overs: Prasidh Krishna bowls a couple of no balls, but Faf du Plessis can't make much of the free hits. 17 runs from that over though, as Ruturaj Gaikwad smashes a superb six

IPL 2021 live score: CSK 98 for 0 in 11 overs. FIFTY for Ruturaj Gaikwad. Kamlesh Nagarkoti into the attack and concedes two sixes in that over as CSK target him. Good knock from Gaikwad so far, will switch gears now.

KKR vs CSK live score: CSK 82-0 in 10 overs: Another over of Sunil Narine played out. Wonder why, given CSK are zero down. They can surely afford to attack more. But they do have a decent base.

IPL 2021 live score: CSK 77 for 0 in 9 overs. For some reason, CSK are not going all guns blazing. They've played out an over from Varun Chakravarthy. Enough runs on board so far? 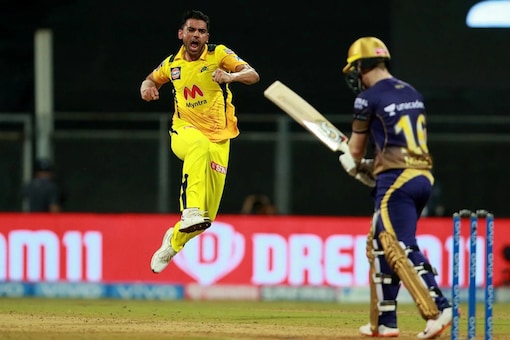 That’s an end to a superb game of cricket. what a comeback from Knightriders here. They were 32/5 at one stage and then came the counter-attack from Pat Cummins and Anrdre Russell that almost puched CSK to the brink. But MSD must be glad that CSK were able to run out Prasidh Krishna.

CSK have had a good start to the season. They have played some fine all-round cricket in all the three matches and ended up victorious in two. The difference between CSK of 2020 and 2021 has been the combined effort of 8-10 in-form players. Faf du Plessis has provided them with the starts, Suresh Raina, Ambati Rayudu, Ravindra Jadeja and Moeen Ali have all chipped in with significant performances in the middle order.

The only concern is the form of Ruturaj Gaikwad at the top of the order – he has failed in all the three matches. Ali has been their trump card and surprise package. He has come up with three high impact batting performances from number three which also returning with crucial wickets and being restrictive in two of the three matches. MS Dhoni has pushed himself down to number 7 with the team not needing his services so far.

KKR got off to a winning start but since then have lost their way a little. Nitish Rana has been their standout batsmen with two fifties in three matches but a lack of contribution from other big names in the top and middle order is hurting the franchise.

Shubman Gill has got a start in each of the innings but failed to convert it into a significant match-defining score – he needs to come up with a big performance. Gill also had an ordinary outing in the UAE for KKR in 2020. Eoin Morgan is not playing to his potential and has failed in two of the three matches. Andre Russell gave a glimpse of his destructive prowess against the Challengers but it was a case of too little too late. Russell is still nowhere near the batsman he was for KKR in IPL 2019 and this is hurting the franchise.