Tracing back to his international debut back in 2017, Cricketnext takes a look at Kuldeep Yadav's path-breaking performances across all formats.

Since making his international debut, Kuldeep Yadav has become a crucial part of India’s limited overs bowling machinery. And now the left-arm spinner is slowly making a case for him to become a regular in the Test set-up as well, having taken his second five-wicket haul, against Australia in the fourth and the final Test of the 2018/19 Border-Gavaskar Trophy.

Tracing back to his debut back in 2017, Cricketnext takes a look at the youngster’s path-breaking performances across all formats: In the finale of a hostile series between India and Australia, Kuldeep Yadav made his international debut replacing Ishant Sharma. Post electing to bat, Australia ended the first session with David Warner and Steve Smith looking set and poised for big scores. Enter debutant Kuldeep Yadav.

India were hoping that the mystery spinner would prove to be the trump card in Dharamsala, and the move paid dividends. The Australian batsmen failed to read Kuldeep’s variations, from his hand and off the wicket. Kuldeep ended Day 1 with figures of 4/68, helping India restrict the opposition for 300 in the first innings. The home side eventually went on to win the Test by eight wickets, courtesy of an all-round performance by Ravindra Jadeja and clinched the series 2-1. In the second ODI of the five-match series against Australia in 2017, Kuldeep Yadav became only the third Indian bowler to take an ODI hat-trick, after Kapil Dev and Chetan Sharma. He ripped through Australia’s lower order at Eden Gardens, cleaning up Matthew Wade, trapping Ashton Agar in front and finding the outside edge of Pat Cummins. His spell of 3/54 guided India to a 50-run victory and helped the hosts go up 2-0 in the series. The toughest Test of Kuldeep’s short limited overs career was supposed to be in South Africa. But dry conditions in the region enabled purchase from the pitches, and the wrist-spinner finished with 17 wickets in six ODIs.

His best performance came in the third ODI of the series at Cape Town. India piled on 303 runs after being asked to bat, with skipper Virat Kohli scoring an unbeaten 160 off 159 balls. The 23-year-old was in great form on the night, conceding just 23 runs from his nine overs and picking up four wickets – his best figures in ODIs. South Africa were dismissed for just 179 and India took an unassailable 3-0 lead in the series. Against a devastating England batting line-up, India were counting on their wrist-spin pair, Kuldeep Yadav and Yuzvendra Chahal, to come good heading into the first of three T20Is. While the leg-spinner failed to deliver, the ‘Chinaman’ bowler produced the best figures of his international career.

Yadav was introduced into the attack in the 10th over with England on 72/1 and Jos Buttler on a rampage. The England opener dispatched the spinner for a boundary on the first delivery but that was all he could do. The left-arm spinner warmed up by cleaning up the struggling Alex Hales in his second over and then turned the screws on the hosts in his third over by picking up three wickets in the space of four deliveries. His victims were Eoin Morgan, Jonny Bairstow and Joe Root, all three failing to read the bowler.

By the time Virat Kohli completed a fine high catch in the deep to send back Buttler and hand Yadav his first ever fifer in an international T20, England had already conceded the momentum to the ‘Men in Blue’. Yadav’s 5/24 allowed India to restrict England to 159, a target that was duly achieved with 10 balls to spare, thanks to an unbeaten KL Rahul century. 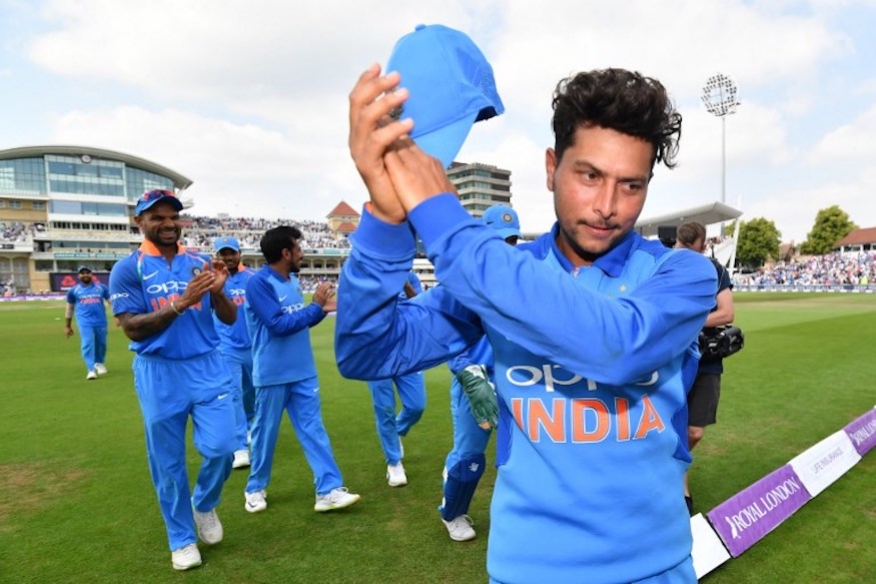 After an inspiring performance in the first T20I against England, Kuldeep Yadav once again proved to be a tough proposition for Eoin Morgan and his men, in the first ODI at Trent Bridge of the three-match series. Post a healthy start by openers Jonny Bairstow and Jason Roy, the chinaman stifled the opposition with his variations and guile. Roy, who looked well set for a big score, mistimed a reverse sweep and Umesh Yadav took a simple catch. Bairstow and Joe Root were deceived in the air and were dismissed shortly thereafter. The dangerous Jos Buttler was caught behind the legs by MS Dhoni and Ben Stokes, like Roy, was caught trying to play a reverse-sweep. David Willey failed to capitalise on a short ball and KL Rahul took a simple catch at deep midwicket for Kuldeep’s sixth. Overlooked in Adelaide, all-pace attack in Perth, misses Boxing Day Test - it took a while for Kuldeep Yadav to finally have a say in the Border-Gavaskar Trophy 2018/19. On a wicket historically assisting spin, and with the series at 2-1 in favour of the visitors, Virat Kohli went in with a two-seamer two-spinner attack for the final Test. With Ravichandran Ashwin still recovering from injury, the 24-year-old was given the nod to partner Ravindra Jadeja.

The hosts were found wanting against the left-arm spinner and succumbed to his craftiness. On Day 3, he forced Usman Khawaja to play a rash shot to give India a breakthrough post a steady opening stand. He pouched a sharp caught and bowled off Travis Head, deceived Tim Paine with his flight to take the top of leg-stump before cleaning up the tail the following day.

Kuldeep ended with figures of 5 for 99 - becoming the first left-arm wrist spinner to take a five-wicket haul in Australia in 64 years, and put India in a strong position to seal their first ever Test series win in Australia.