India vs England Live Updates IND 195/4---SIX! INDIA WIN win the warm up game with ease. They made a mockery of England total here. Pant slammed Jordan for a six to seal the deal. Poor bowling from England. Jordan and England lost the plot, they could have taken it to the final over where you never know....Meanwhile it is a good bye from our side. Hope you enjoyed our coverage.

India vs England Live Updates IND 169/4(18)---It's getting a bit tight here. Great over from David Willey as he dismissed Surya Kumar Yadav. India need 20 off last 2 overs. In the middle is Hardik Pandya and Rishabh Pant. Excellent opportunity for the duo to make a mark.

India vs England Live Updates IND 162/3(16.5)--Finally a boundary and India need 27 off 19. It can get tight if England can get away with the next over. Pant is already on the lookout to get the odd boundary, the run rate is increasing with every ball. Last three overs have been slow for India.

India vs England Live Updates IND 148/2(15)--Just 41 needed off 30. India have made a mockery of England total which shows India can chase almost anything down on these kind of pitches. 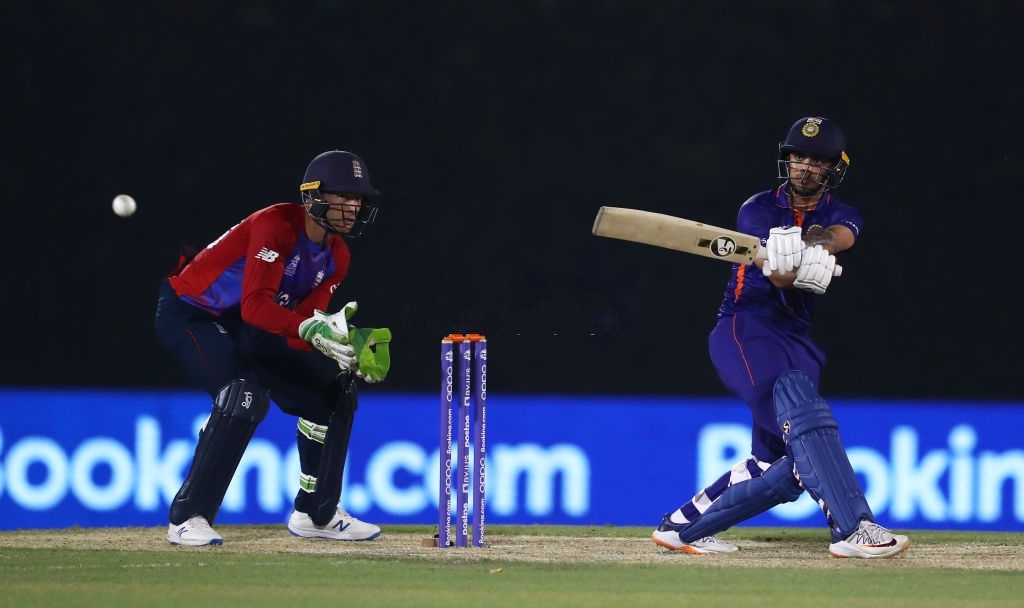 India vs England Live Updates IND 100/1(11.1)---At this stage England were 83/3. India looks favourite to win the game from here...And here comes Ishan Kishan--SIX! Danced down the track and launched Rashid for a maximum.

India vs England Live Updates IND 92/1(10)---Halfway mark and India are plotting along fine. KL Rahul's departure brought Kohli to the crease. He is taking singles at the moment but can accelarate any moment now as the req run rate is increasing with every ball. India still need almost 100 runs from here.

India vs England Live Updates IND 82/1(8.2)--WICKET! KL Rahul departs. Great catch from Moeen Ali and fans must be disappointed that Rahul threw it away. He was looking flawless. Great hitting. His strike rate increased manifolds as compared to IPL.

Superb striking from KL Rahul. India are 73/0 in 7 overs. 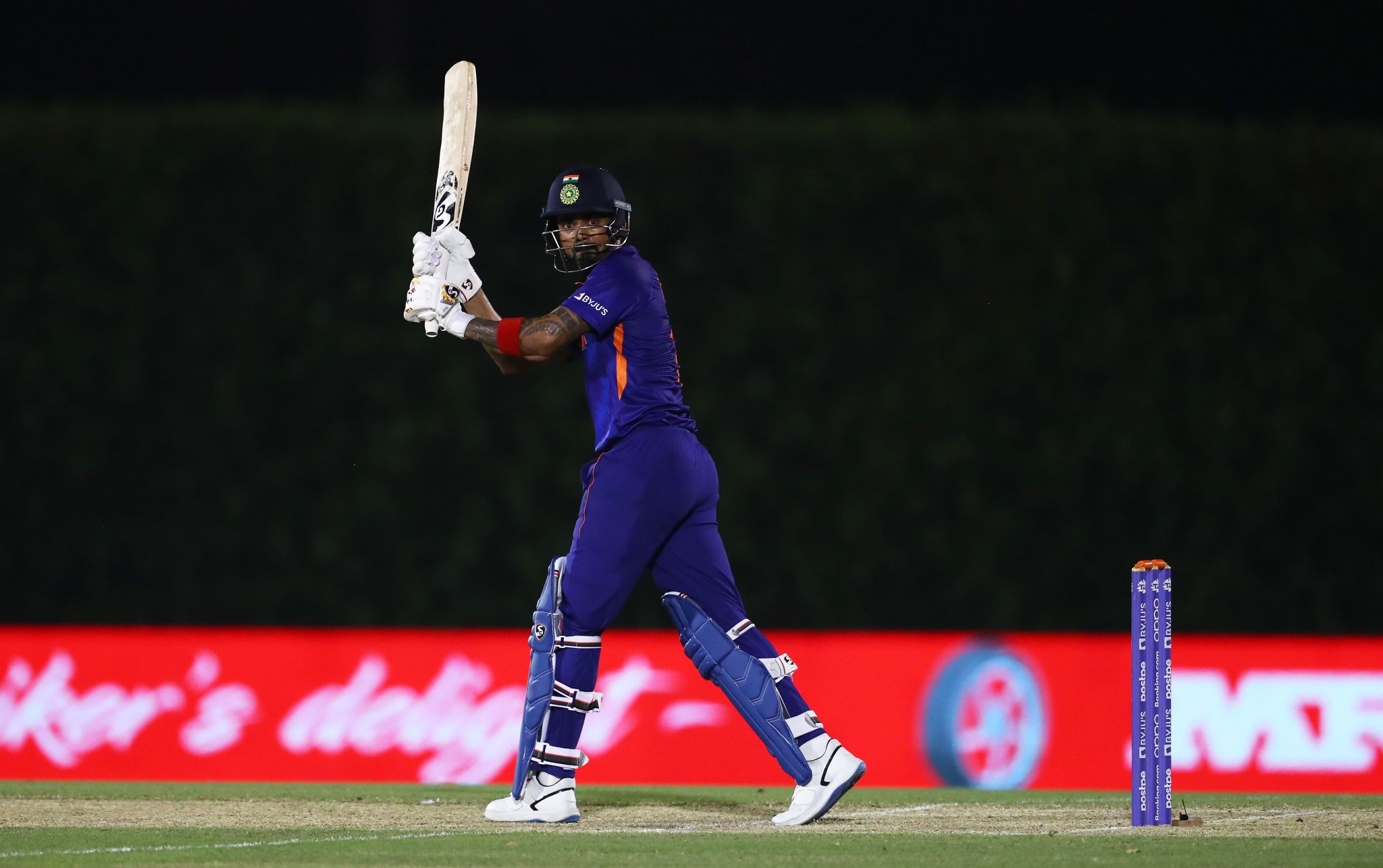 India vs England Live Updates IND 64/0---India going strong thanks to their openers. KL Rahul slamming the pacers and therefore, Moeen Ali was brought to the attack. Rahul's strike rate is superb, he has 43 off 17!

India vs England Live Updates IND 29/0---SIX--Massive hit from KL Rahul. He is simply looking superb. Just brought his IPL form here. Playing flawless cricket at the moment, already 14 off this over.

India vs England Live Updates IND 8/0---India are away. Ishan Kishan and KL Rahul have come out to open as Rohit Sharma has been rested.

ndia vs England Live Updates ENG 188/5---21 RUNS off the final over....  England managed to finish at 188! Awesome hitting from Moeen Ali in Dubai. This wicket was a graveyard for the bowlers, really.

India vs England Live Updates ENG 153/5---WICKET! Bairstow is gone, no he won't get that fifty. He gets 49, but great batting and talking about great, that was a great yorker from Jasprit Bumrah. Last 10 balls left for England.

Shami the lone bright spot for India, his figures 40/3(4) 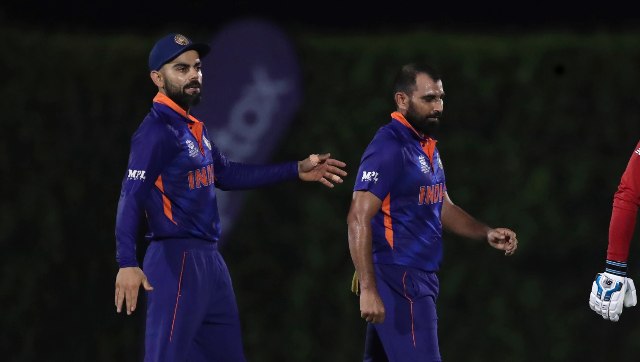 India vs England Live Updates ENG 149/4(17)---Bairstow is at 46 and we are sure that he is planning to belt India hard with just three overs to go. Shami who has figures of 3/28 is coming back for his final over.

India vs England Live Updates ENG 137/4(16)---England are moving towards a huge score here. Except Mohammed Shami, none of the bowlers have showed any skill set to be proud of. Meanwhile Bumrah completed his third over, he gave away 21 runs.

India vs England Live Updates ENG 81/3(11)--Ashwin completes his third over; Meanwhile Rahul Chahar has managed to dismiss Dawid Malan with a straighter one, he is back for his third over.

India vs England Live Updates ENG 76/2(9)--Ravichandran Ashwin gives away just five runs, that's a great comeback from Ash. Altered his lengths constantly holding up Bairstow at the other end. Gave away 8 in his first over.

India vs England Live Updates ENG 68/2(7.4): Rahul Chahar has been taken to cleaners by Jonny Bairstow here. A couple of boundaries...

India vs England Live Updates ENG 47/2: WICKET! Shami gets another one--Jason Roy. He was looking to improvise but great catch at short fine leg. Great bowling.

India vs England Live Updates ENG 36/1(3.4): WICKET! Shami has cleaned up Butler, what a comeback from Shami. England were going all guns blazing, but India have applied the brakes.

In this situation if the team punts on him, expecting that his ‘MS Dhoni-esque’ helicopter shots will come off, they would have to decide which is a better slot for him. Is it above Rishabh Pant at No. 5, or at No. 6, where he may get only 15 balls at the max to show his prowess.

News from the middle: Rohit Sharma has been rested.

If Rahul is the team’s preferred choice, Kishan might just force Hardik into the No. 6 slot in the batting order, which is ideal for a finisher. For MI, both Hardik and Kishan had underwhelming returns in the UAE leg. Hardik is another big factor in this line-up as chances of him bowling full tilt or for that matter bowling at all are very less.

IND vs ENG, Live Cricket Score, T20 World Cup 2021 Warm-up Match Updates: India would look to fine-tune their preparation for the 2021 men’s T20 World Cup when they face 2016 runners-up England in their first warm-up match in Dubai on Monday. Match practice will not be an issue as the Indian players are coming after playing for their franchises in the recently-concluded IPL. It’s more about finding the right combination ahead of their opening match.

The two warm-up matches, against England followed by the match against Australia on Wednesday, gives Virat Kohli and Indian team management a chance to finalise their playing eleven before the high-octane opening clash with Pakistan on October 24. India will be looking to test players for the showpiece event apart from assessing all-rounder Hardik Pandya’s form, especially with the ball. Pandya’s form is a big headache as the mystery over his availability to bowl in the tournament continues.

With Rohit Sharma certain to open, it remains to be seen whether Ishan Kishan or KL Rahul will partner him at the top. Rahul’s scores, while captaining Punjab Kings in the UAE leg of IPL 2021, read as 49, 21, 21, 67, 39, and 98 not out. Kishan, on the other hand, had measly returns of 11, 14, and 9 while batting in the middle order for Mumbai Indians. After a break of two matches, he returned to slam 50 not out and 84 as an opener.

In terms of bowling, Ravindra Jadeja and Varun Chakravarthy could be the spin options. In the pace department, Bhuvneshwar Kumar and Jasprit Bumrah pick themselves on account of form and experience. It could be a toss-up between Ravichandran Ashwin, Shardul Thakur, and Rahul Chahar for the fifth bowler’s spot.

England, on the other hand, will look to decide on their best combinations in batting and bowling during the warm-up matches. Some players from their team also starred in IPL 2021, giving them a good knowledge of what to expect from the UAE pitches. The form of skipper Eoin Morgan, who had a very woeful IPL 2021 with the bat, will be of major concern for the think tank.