India Women Vs England Day 3 Highlights: As it Happened

It is stumps on day three and for now India will heave a sigh of relief. They have nine wickets in hand to save this match, and England are still the front runners in this match. Do join us tomorrow for the last day.

With each passing minute the chances of match resuming are looking bleak. Consider this day, all but over. And India will have to plan ahead for tomorrow and look to save all their wickets.

So it is still raining in Bristol and looks like the play isn't going to resume anytime soon. But stay tuned for further updates.

So it's still dark at Bristol. Indians can either treat this as a welcome break, or an opportunity lost to score some runs and put England under pressure. Stay tuned for further updates.

India vs England live score: And rain strikes again. This is not a good news, and tea is taken on day three. This would get even more difficult for the Indian batters. But Shafali and Deepti have shown great composure here as the score is 83/1.

Indw vs Engw live score: India Women 77-1, following on: FIFTY for Shafali Verma. Gets to the landmark with a single. 63 balls for the effort. A top innings once again. What a debut she is having. She'll be looking to make this one into a century.

Indw vs Engw live score: India Women 63-1, following on: Play has resumed after the rain break. Hopefully continuous action from here. Shafali Verma 4 away from a half-century.

Indw vs Engw live score: India Women 57-1, following on: And we have a rain delay again. It's been that kind of a day. The day has been called off in the WTC final between India and New Zealand in Southampton. It's been start-stop in Bristol. Covers coming on.

Indw vs Engw live score: India Women 56-1, following on: Shafali Verma gets a life. A tough chance put down at slip. Thick edge, flew fast and low to the left of the slip fielder who couldn't react in time. Goes to the boundary.

Day one of #WTCFinal2021 called off but enjoying watching Shafali Varma in the #INDWvsENGW Test. Delight to watch the fearlessness. pic.twitter.com/cvg0agstUO

Indw vs Engw live score: India Women 41-1, following on: It's a Shafali Verma show once again. Two boundaries through the point region, perfect steers/guides. England have fielders there but she still finds the gap. Into the 30s.

Indw vs Engw live score: India Women 30-1, following on: Play has resumed after the brief rain break. India have promoted Deepti Sharma to No. 3. A good decision considering she seemed in good touch in the first inning.

A promising update from Bristol

Bristol update: it's still not raining, but at least the covers are now coming off.

India women vs England women: Well well, it's raining in Bristol too. India Women are 29 for 1 following on. No info yet on how heavy the rain is, but we have a delayed start for the second session. India wouldn't mind it. They'll be glad if the weather eats the time left in the game.

Indw vs Engw: India have lost a wicket here at the stroke of lunch. Mandhana pokes at a delivery outside off and is caught out at slips for 8. India 29-1 and trail by 136 runs.

India women vs England women: Verma is looking comfortable here as she dispatches Brunt for couple of boundaries. Brunt is not amused at all. Meanwhile India move to 21/0.

India vs England live score: So Smriti Madhana and Shafali Verma begin the innings here. And the left-hander starts with a four. This is a really crucial phase here and Team India would hope for a similar effort from this pair. Verma too flicks one off her hips for a four. India 9/0.

Indw vs Engw: That's the end of India's innings. Jhulan Goswami is bowled by Anya Shrubsole for just 1. In all, poor batting by the Indians here. India all-out for 231 and England have enforced follow-on.

India women vs England women: And just when one thought that Pooja Vastrakar was batting well, she is bowled for 12 by Brunt. Nothing special about the ball there, but the batter misses it completely. The score now is 230/9.

India vs England live score: Deepti and Vastrakar are starting to combine well and runs are coming at decent pace. This is good partnership and these two have shown, how to bat when the going is tough. The score move to 230/8.

Indw vs Engw: Vastrakar is showing resilience there. Other Indian batters need to learn from her. And there is a change in bowling as Dunkley comes into the attack. India move to 207/8.

India women vs England women: Pooja Vastrakar has to give support to Deepti Sharma here and the latter has to look to score runs. Trying to survive won't be of any help to India. The score is 203/8.

India vs England live score: A ripper of a delivery from Ecclestone sees the back of Rana. The ball pitches on middle-leg, and turns shaprly taking the edge of the bat. Rana is out for 2 as India are 197/8.

Indw vs Engw: Sneh Rana and Deepti will have to dig deep to score some runs. England are bowling tight lines, and their fielding is also building extra pressure here. India need to learn quickly here. It's 197/7.

India women vs England women: A rare loose ball by Ecclestone, and Deepti sweeps her for a four. India is going to need many more of these. This is the first four of the day for India here. India 194/7.

India vs England live score: And without adding any runs to the total today, England have picked up yet another wicket. Ecclestone has her third wicket and Taniya Bhatia is out for 0. India 187/7.

India women vs England women: Nat Sciver starts the day's proceedings. The only way for India to survive in this match is to score runs. They can't just be blocking everything thrown at them. Meanwhile England start with a maiden. India 187/5.

For just 20 runs, India lost their five wickets. This just shows the kind of batting Indians have done. Skipper Mithali Raj, Shikha Pandey and Punam Raut were all bundled out cheaply. 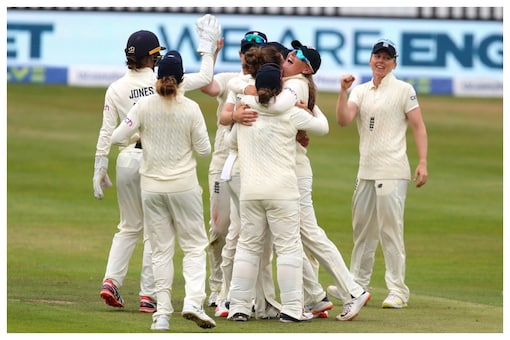 India Women vs England Women, Only Test Day 3 Live Updates: Indw vs Engw live score: India end day three at 83/1, 82 runs still behind England. The hosts are still in a commanding position and would press for a win tomorrow.

A mini collapse left India in deep trouble against England in the only Test match at Bristol. India lost four wickets for as many runs; fall of Smriti Mandhana opened up the flood gate just before the close of play. Mandhana (78) was quickly followed by nightwatchmen Shikha Pandey(0), and skipper Mithali Raj (2) to the dressing room. Later Punam Raut (2)’s departure reduced India to 183/5. Harmanpreet Kaur too was given out but she chose to review it and replays confirmed a huge edge, giving her a second chance. At close, India were 187/5 in reply to England’s 397/9, trailing the visitors 209. They still need another nine runs to avoid follow on.

Earlier Shafali Verma and Smriti Mandhana provided India Women a confident start but the visitors still have a mountain to climb after England Women posted a mammoth 396 for nine in their first innings in the one-off Test, here on Friday. It was the highest-ever total scored by a team against India in Test cricket and the visitors are now trailing by 209 runs with Verma (96) and Mandhana (78) taking India to 63 for no loss at tea on the second day. Verma was at her usual aggressive self as she cut and pulled in her own inimitable style. The 17-year-old not only presented the straight bat for defence with grace, she also hit a six off Nat Sciver with remarkable ease.It was only the second six hit by an Indian woman in Test cricket.

Earlier resuming at the overnight score of 269 for six, England lost Katherine Brunt (8) and Sophie Ecclestone (17) in the morning session but Sophia Dunkley continued to frustrate the visitors, remaining unbeaten on 74. England added 127 runs to their overnight score. Dunkley and Anya Shrubsole (47) shared valuable 70 runs for the ninth wicket. Debutant off-spinner Sneh Rana was the pick of the bowlers for India with figures of 4/131, while Deepti Sharma (3/65) too impressed with the ball. India are playing their first Test in nearly seven years.