India vs New Zealand, WTC Final Live Score And Updates: New Zealand have put themselves in a pretty decent spot but the forecast is of rain on Monday.

And it's official. The day has been washed out by rain. Stumps have been drawn early. No other choice, really. Two more days remain. Let's see if the teams can get a result.

No great update from Southampton. It's raining steadily. It's unlikely that we'll get a game, but the umpires won't make it official just yet. The wait continues.

It's raining again in Southampton. That was expected though, wasn't it?

Who would have been the two finalists if the #WTC had taken place in the 1980s? 🤔

Lunch has been taken at the Hampshire Bowl in Southampton after no play was possible in the opening session of day four 🍲#WTC21 Final | #INDvNZ pic.twitter.com/aA8YQlwJf6

India vs New Zealand, World Test Championship Final update: And it's lunch time. Which means the first session is officially gone. Similar updates coming your way through the day.

A promising update. The rain has slowed down a touch... just a touch. And it's a bit brighter. Let's see if this weather holds itself for a while. Still a long way away from resumption though, especially given the forecast isn't great.

Here's how New Zealand's players are keeping themselves occupied

Wet weather has returned to the Hampshire Bowl so it’s table tennis for now…#WTC21 pic.twitter.com/hA0AjPgiya

No update about the game, but here are updates from the ICC social feed

"It's a lot of hard work, it tests everything."

The #WTC21 finalists reveal what their favourite thing about Test cricket is👇 pic.twitter.com/ShYyO4ipv2

Nothing much to update from the game. Covers very much in place, rain coming down. This is going to be the theme for the day.

India vs New Zealand, WTC Final update: Day 4 should have started by now, but we officially have a rain delay. The slow wait to eventual calling off begins. Long, long day ahead.

Ind vs NZ Match Update: Since the pitch is under the covers, the New Zealand cricketers have been passing time playing some table tennis. 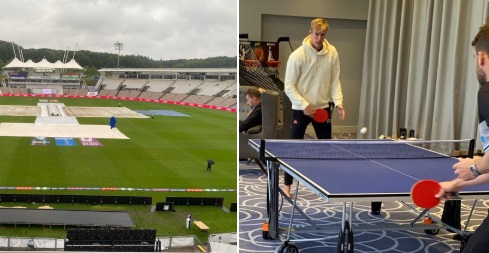 Now, one of the biggest talking points from Day 3 of the contest was the performance of Indian pacers. Did India commit a mistake by not picking a genuine swing bowler in the eleven for the English conditions? Or is the lack of match practice hurting them? Well, former New Zealand pacer Simon Doull thinks it's the absence of having played a warm-up match that is troubling them. Read More Here

Not Looking Good: So guys, if you were hoping that there will be uninterrupted action today in Southampton, we have some bad nows. As of now, it's raining in Southampton and the forecast for the rest of the day isn't good either. Welp.

On Sunday, the Day 4 of the finale, we saw India being bowled out for 217 after resuming on their overnight total of 146/3. New Zealand's Kyle Jamieson continues to make a strong impression, picking up yet another five-wicket haul that included the scalps of India captain Virat Kohli and big-hitting Rishabh Pant. New Zealand batters complimented their bowlers with openers adding 70 runs before being separated. India pacers failed to make any early impact which resulted in fans missing Bhuvneshwar Kumar in swing-friendly English conditions. However, the play ended half-an-hour early because of bad light with New Zealand 101/2, trailing India by 116 runs.

Hello folks! Welcome to our live coverage from the fourth day of the ICC World Test Championship currently underway in Southampton where the world's top two teams are battling each other and the weather gods to try and lay their hands on the title. However, the latst weather update from the venue is that the fourth day might end up being a complete washout with forecast for rain during the entire day. India vs New Zealand, WTC Final 2021, IND vs NZ Live Score and Latest Updates: The entire day has been washed out due to rain. However, the forecast for the remaining two days is better.

Jamieson’s second five-wicket haul against India in three Tests had Virat Kohli’s men all out for 217 in overcast conditions.

In reply, New Zealand were 101 for two at stumps as Conway (54 off 152 balls) scored his third successive Test half-century before flicking one off Ishant Sharma to Mohammed Shami before the close of play.

It was 6 feet 8 inch tall Jamieson, who after last year’s series in New Zealand, has once again turned into a nightmare for the Indian batsmen.

Having removed Rohit Sharma on Saturday morning, Jamieson was relentless with his length and the bounce did the rest with clever traps laid for skipper Kohli and the dangerous Rishabh Pant.

Kohli and his deputy Ajinkya Rahane walked into a nicely laid traps as India failed to reach 250, a good total in the prevailing conditions as per batting coach Vikram Rathour.

The overcast conditions made batting difficult and the likes of Jamieson, Boult and Wagner indulged in a ‘who blinks first’ game with the Indian batters and came out trumps with some incisive seam, swing and short pitched bowling.

Kohli (44, 132 balls) couldn’t add a single run to his overnight score as his RCB teammate Jamieson made life difficult for him.

Kohli, who had shown admirable patience in leaving every delivery outside the off-stump on day two, was ready to dig deep but the Black Caps resorted to the tactics that worked wonderfully against the India captain in their home conditions back in 2020.

Boult and Jamieson kept bowling outside the off-stump channel and Kohli kept on leaving before the lanky seamer went slightly wide off the crease and got one to aim at rival skipper’s boot laces.

Kohli had shaped for an away going delivery and the balance of his head was tilted outside the off-stump, leaving him in tangle and the DRS review that he took was a waste of time.

Pant didn’t score a run for 19 balls and then got a boundary with a flick through mid-wicket. Two balls later, he took the bait when Jamieson angled one on the imaginary fifth off-stump. He went for an expansive drive only to be snapped in the third slip by Tom Latham.

Once the 61-run stand with Kohli had ended, Rahane (49, 119 balls) sensed that the scoreboard needed a move on and started playing a few shots.

But perhaps, the milestone was working on his mind and despite playing a mistimed pull-shot one ball earlier, Wagner with his signature short ball prevented him from reaching a well-deserved fifty.

Rahane’s disappointment was evident as he fell into the trap to play the pull-shot despite knowing that Wagner had kept a deep fine leg and long leg for the shot.

Ravichandran Ashwin (22) threw his bat around and got some useful runs but was never going to last long as Southee took care of him just before lunch break.

Post lunch, Jamieson removed Ishant and Jasprit Bumrah off successive deliveries but Shami prevented him from completing a hat-trick.

When New Zealand batted, Conway and the ever-stodgy Tom Latham (30 off 104) added 70, blunting the sharp new ball attack from the Indians. Shami (0/19 in 11 overs) presented a nice seam position but without much success while Ashwin (1/20 in 12 overs) got appreciable drift and dip to remove Latham.