India vs New Zealand live score: India 64-2. STUMPS: Virat Kohli and Cheteshwar Pujara see through the rest of the day. An interesting day today, with India and NZ battling hard. India's bowlers did well but NZ's tail wagged, as teams often do against India. India have wiped out the small deficit and are into a slender lead now. Tomorrow is going to be a thrilling day, hopefully.

India vs New Zealand live score: India 51-2. WICKET - Rohit Sharma lbw Tim Southee 30. OFFERS NO SHOT! Rohit Sharma pads up but this is an inswinger. Nips in a little and strikes him outside off, would have clipped off stump. Huge strike, Southee the man for NZ again.

India vs New Zealand: WTC Final India 41-1. Cheteshwar Pujara doing what he does best. Take it slow, show plenty of patience and grit. Neil Wagner is into the attack, and he'll test India's batsmen with short balls. Rohit at the other end is into his 20s and looking good.

India vs New Zealand live score: India 32-1. So, India are effectively 0 for 1. Scores are level now, with India having lost Shubman Gill. Trent Boult and Kyle Jamieson bowling to Rohit and Cheteshwar Pujara.

India vs New Zealand: WTC Final India 24-1. WICKET - Shubman Gill lbw Tim Southee 8. Plumb. This one from Southee holds its line and comes in to the right hander, Gill looks to play across and misses. He'll be rueing the shot selection. Decides against the review, wisely so.

India vs New Zealand live score: India 11-0. Decent start so far from India. Conditions not too bad for batting, and the openers have been solid even as NZ's pacers are getting it to swing both ways. Rohit Sharma with a boundary against Trent Boult with a fierce cut shot.

India vs New Zealand: WTC Final India 4-0. Tim Southee and Trent Boult with the new ball, Shubman Gill and Rohit Sharma in the middle. Top quality contest this. India need to wipe out the deficit first.

India vs New Zealand live score: And NZ is bundled out for 249. Jadeja gets his first man as Southee gets to get after the left arm spinner. NZ lead by 32 runs here.

India vs New Zealand: WTC Final - India would be disappointed with the runs NZ tail has scored. Their tail also needs to fire in these tense situations. It has not been easy for the Indians. Another over comes to an end as score moves to 243/9.

Ind vs NZ, WTC Final Update: Ashwin has his second wicket here. He takes Wagner as NZ are 9 down now. This match, clearly NZ are ahead, but India can still make a comeback. It is 234/9.

India vs New Zealand live score: The lead is growing for NZ, but it is not out of hands for the Indians. They will have to bat exceptionally well here. Another over comes to an end as NZ move to 234/8.

India vs New Zealand: WTC Final - After a long wait, India finally get Kane Williamson for 49. Ishant Sharma finally induces an edge, and the NZ skipper is out. But they lead by 4 now. The score is 221/8.

Ind vs NZ, WTC Final Update: Williamson is looking in great touch and he has almost single-handedly taken past India. New Zealand move to 216/7.

India vs New Zealand live score: Runs are coming fairly easy for New Zealand. India needs to wrap up the tail early, or the match will slip out of their grips. But New Zealand have shown great resistance. It is 209/7.

India vs New Zealand: WTC Final - Despite the wickets, New Zealand have almost wiped off the deficit. India should try and restrict them to the minimum here. The score has moved to 199/7.

Ind vs NZ, WTC Final Update: The sun is out and the batting is looking much more easier now. India, safe to assume, will struggle to get rest of the wickets. Kiwis trail by only 31 now. It is 186/6. Jamieson hits a six, but is out the next ball. Shami picks his fourth.

India vs New Zealand live score: The umpire's call is once again under scanner as Williamson has been ruled not out by the umpire, which saves the batsman. Kiwis move to 179/6 here. India can consider themselves unlucky here.

India vs New Zealand: WTC Final  - Even though India got rid of de Grandhomme, the lead for them is just under 50 now. Kyle Jamieson is looking to play his shots as well. The score moves to 171/6.

Ind vs NZ, WTC Final Update: Shami has his third wicket as he gets his length right this time around. The ball comes back in to de Grandhomme and he is out LBW. New Zealand are 162/6.

India vs New Zealand live score: And India have taken the second new ball. Mohammed Shami to start the proceedings. But after the start of the second session, Indians have looked a bit rusty. Two fours come in the over. It is 161/5.

India vs New Zealand: WTC Final  - Still no wicket to the Indians after the lunch break. They need Bumrah to fire, who has been rather short on this kind of a wicket. The score moves to 151/5.

Ind vs NZ, WTC Final Update: de Grandhomme is looking to score quickly and that could be a threat to the Indians. They cannot let their guard down here. Meanwhile, Jadeja comes up with a maiden. It is 147/5.

India vs New Zealand live score: After Bumrah completes his first over after lunch, Jadeja is brought into the attack. He hasn't bowled much at all here. India still needs wickets. It is 144-5.

India vs New Zealand Live Score: NZ 135 for 5 at Lunch on Day 5. India end with three wickets in the session, but New Zealand have Kane Williamson still in. The game is superbly poised at the moment. Ross Taylor and Williamson batted out the first hour of the day before Shami struck twice and Ishant once. Which way will the game go in the second session?

India vs New Zealand live score: WTC Final - WICKET NZ 135 for 5: BJ Watling b Mohammed Shami 1. Perfect ball. Length, moves a little to beat the bat and hit the stumps. No footwork from Watling costs him. NZ five down, onus on Williamson now.

India vs New Zealand: WTC Final - NZ 134 for 4: Henry Nicholls c Rohit Sharma b Ishant Sharma 7. Another sharp catch. Ishant from around the stumps gets the edge, ball goes between 1st and second slips, Rohit dives across and holds on. Superb stuff, India rewarded for their patience.

Virender Sehwag funny as ever

Ind vs NZ, WTC Final Update: NZ 134 for 3. Kane WIlliamson is batting on 19 off 104 balls. Such has been his patience. Henry Nicholls has joined him and the duo is rebuilding after Ross Taylor's dismissal.

What a catch from Gill that was

Stunning take by Gill. The pigeon was confident he will take it though. pic.twitter.com/VeRgVcExD6 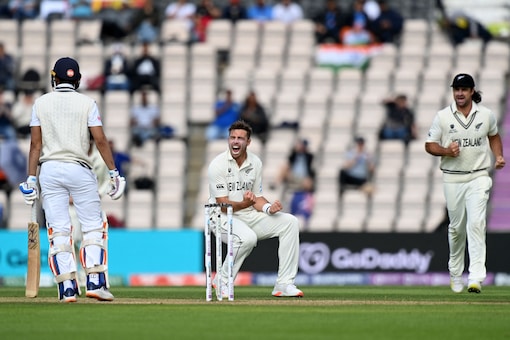 India vs New Zealand, WTC Final 2021, IND vs NZ Live Score and Latest Updates: Virat Kohli and Cheteshwar Pujara see through the rest of the day. An interesting day today, with India and NZ battling hard. India’s bowlers did well but NZ’s tail wagged, as teams often do against India. India have wiped out the small deficit and are into a slender lead now. Tomorrow is going to be a thrilling day, hopefully.

New Zealand was somewhat comfortably placed at 101-2 after fast bowler Kyle Jamiesen’s 5-31 dismissed India for 217 in the first innings on the third day of the rain-affected inaugural WTC final. The first day was completely washed out while only 64.4 overs could be bowled on the second day. India’s middle order was rattled by an all-out New Zealand pace attack on Sunday before Devon Conway (54) and Tom Latham (30) provided a solid opening stand of 70 runs. There is the provision of a reserve day and there’s a much better forecast over the remaining two days. If the outcome is a draw, the trophy will be shared. Given a standard men’s Test lasts a maximum of five days, this match would usually be destined for a draw. The provision of a reserve day on Wednesday, however, offers the hope that one team will be able to claim a winners’ cheque worth $1.6 million, with the runners-up receiving $800,000.

But that is still no guarantee a two-year process to crown Test cricket’s first official world champion will end with an outright winner. The International Cricket Council confirmed Monday the final would be extended into Wednesday if the match had not been completed by close of play on Tuesday’s fifth day. But the global governing body stressed the aim of using the reserve day was to do with making up the overs lost in the game, rather than trying to force a result The ICC added a decision would be taken by the match officials 60 minutes before the scheduled close of play on day five. Tickets have now gone on sale to spectators who had paid to attend the washed-out first and fourth days, with fans who missed out in the initial ballot able to buy tickets from Tuesday.