RR WIN: Tom Curran comes on for the last over and Morris gets a double on the first ball. The next ball is launched into the orbit and now Rajasthan are just four away from a famous win. And Morris ends it with a six. A win for Rajasthan Royals here, with two balls to spare. Morris scores 38 from 16.

IPL 2021 Live DC vs RR: Rabada comes into the attack, and Morris clears hit front leg to send the ball into the orbit. A big six that from the big Protean. Morris has decided that it's his game now. He uses Rabada's extra pace to hit a mighty six. RR 136-7 in 19 overs and need 12 in 6 balls.

IPl 2021 Live Score: Tom Curran comes for the 18th over here. And Rajasthan have found another way to lose a wicket. Oh, it looked like Unadkat was run out, but Pant failed to gather the ball clearly. RR 116-7.

Live Score DC vs RR: David Miller is not yet done as he slams two sixes in two off Avesh Khan. And suddenly the target looks chaseable. Meanwhile, he had also brought his fifty. But Miller is caught out in the same over. This looks like all over for RR. They are 104-7.

RR vs DC live score: Rabada comes back into the attack now, and Delhi are in dire need of a wicket. And Tewatia has thrown his wicket away, just when he was looking set. The ball climbs on to the batsman and he ends up giving up a simple catch. Tewatia is out for 19, Royals are 90-6.

IPL 2021 Live DC vs RR: Stoinis comes into the attack here and Miller hits him for a four on the second ball of the over. Make it two in two, Miller is on fire here. And now it's three in a row. Now he would have to stay till the end. Royals 73-5 in 13 overs.

Tewatia has shown in the past that he can bat well and take RR past the finish line. But this one is a tricky situation. With just five wickets in hand, RR need 91 from 53 balls. The score is 57/5.

RR vs DC live score: RR are in a hurry to lose the match quickly. This time Riyan Parag was deceived by the slower one and he skies it. Dhawan takes yet another catch here. It's 42-5.

Live Score DC vs RR: Avesh Khan comes back into the attack. And now Dube has succumbed to pressure here. Avesh pitches one up, Dube edges it straight to Shikhar Dhawan. This is not looking good for Rajasthan, as they move to 36-4.

IPL 2021 Live DC vs RR: Rabada continues. And his South Africa teammate Miller plays a flowing drive for a four. The key for Rajasthan is to keep calm and play naturally. If him, along with Dube settle here, they could well chase the target. Rajasthan are 26-3 in 6 overs.

RR vs DC live score: This is not looking good for Rajasthan at all. This time Rabada gets a wicket. Previous match's centurion, Sanju Samson is out for 4. Crisis deepens for RR as they are 17-3.

IPL 2021 Live DC vs RR : And another one bites the dust. Woakes has two in one. The ball comes back in sharply to Buttler, as he edges it. Pant takes an excellent catch behind the stumps, and Delhi are on top. It's 13-2 in 3 overs for Rajasthan.

IPl 2021 Live Score: Woakes comes for another over. And Vohra has had enough. He slams two fours on the first two balls. Vohra gets over-ambitious, and chips one in the air. Rabada takes a simple catch at mid on. Royals are 13-1.

Live Score DC vs RR: Avesh Khan starts from the other end. He does well and doesn't give much away to Vohra. This is early pressure on Rajasthan. Once again just two runs from the over. RR are 5-0 in 2 overs.

IPL 2021 Live DC vs RR: Hello and welcome to the second innings of the match between RR and DC. Woakes starts for Delhi as Manan Vohra and Jos Buttler open for Rajasthan. Just three runs come of the over. It's 3-0 in 1.

IPl 2021 Live Score: Sakariya comes on for the final over of the innings here. He bowling the yorkers well and not giving the width to the batsmen to freeze arms. Meanwhile, Rabada edges one and the ball goes past fine leg for a four. Delhi Capitals end with 147-8 in 20 overs.

Live Score DC vs RR: Tom Curran slams Mustafizur for a boundary at the start of the 19th over, but the bowler comes back strongly. He yorks Curran for 21. Also Ashwin is run out on the last ball of the over. as Delhi Capitals are 136-8 in 19 overs.

IPL 2021 Live DC vs RR: Yet another good over by Fiz comes to an end. This has been an exception bowling effort by the Royals so far. Delhi Capitals move to 115-6 in 17 overs.

Live Score DC vs RR: Chris Morris comes back into the attack. He was a bit expensive in his previous overs, but a good chance for him to bag some wickets. And here it comes. Lalit Yadav takes the aerial route and Tewatia takes an excellent catch running backwards. It's 100-6.

IPL 2021 Live DC vs RR: What is happening here. Pant is run out by Parag for 51. Such a disastrous end to a wonderful innings, and now DC are struggling at 92-5. 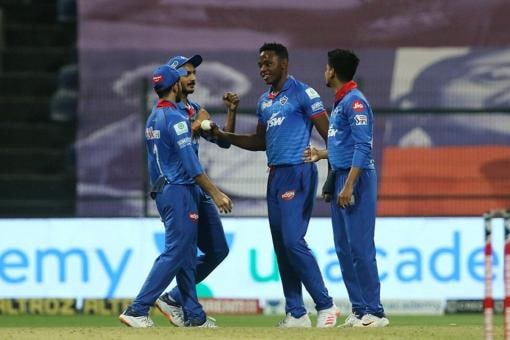 RR vs DC Live Cricket Score, IPL 2021 Today’s Match: An 18-ball 36 by Chris Morris means that Rajasthan Royals have won a famous match here against Delhi Capitals, with two balls to spare. They end on 150-7 in 19.4 overs.

With a plethora of superstars in both the line-ups, the contest promises to be a high-scoring affair on a batting friendly wicket at the Wankhede.

The Capitals seem to have all their bases covered. The biggest news from their camp would be the return of their two bowling superstars from last season – the South African fast bowling pair of Kagiso Rabada and Anrich Nortje. That would mean that the impressive Chris Woakes may have to sit out of the XI. However there is a Covid-19 scare around Nortje which has placed some uncertainty around his availability for the encounter.

The openers were in scintillating form and gave DC a blistering start against CSK adding 138 in less than 14 overs. Prithvi Shaw continued from where he left setting a record in the 2021 Vijay Hazare Trophy – he hammered a brilliant 72 off just 38 deliveries at a stunning strike rate of 189.47. Shikhar Dhawan was the Player of the Match for his 85 off 54 deliveries – contrary to his starts in the previous two editions, the left-hander started aggressively in the season opener this time around thus maximizing his potential at the top.

Pant, Stoinis and Hetmyer add the firepower in the middle order. The captain himself will use himself as a floater depending on the situation of the match. Ajinkya Rahane provides stability and experience in the top order and will play the role of the anchor just in case an early wicket falls for the Capitals.

Avesh Khan was economical with the new ball against CSK. The Capitals would need a better performance from their two experienced spinners – R Ashwin and Amit Mishra – who were taken for aplenty in the middle overs.

Ben Stokes’ ouster from the remainder of the IPL due to a broken finger will be a major blow for the Royals. Stokes provided the X-factor with the bat at the top of the order while also chipping in with some useful fast-medium overs. In his absence, Jos Buttler might be pushed to open the innings with Manan Vohra.

Skipper Sanju Samson, who lit up an empty Wankhede against the Punjab Kings with a scintillating 119 off just 63 deliveries, will hold the key to RR’s success in the top-order. For the Royals to make the playoffs, Samson has to score big and at a high rate and consistently. But as they found out in their previous encounter, that may still not be enough!

Chetan Sakariya would like to prove that was not just a one-match wonder after his impressive IPL debut against the Punjab Kings. Mustafizur Rahman looked a patch of the bowler he has been over the years and Andrew Tye might be a better bet in place of the left-armer.

RR would also hope for a few tight overs from Chris Morris and Shreyas Gopal in the middle overs.