Southampton Weather Update, India vs New Zealand, Day 3:The second day finally saw some action but it was also marred by bad light with play coming to an early end.

As India's bowlers struggle to get their breakthrough, they'd be hoping for help from the weather gods. There was a brief rain interruption in the middle but the sun is back now. Not too bright, but not overcast either.

The sun is out. The second session has started with India's tailenders ready to bat under the sun. New Zealand wouldn't mind that. They'll be batting in good conditions soon. Unlucky for India.

So the big news from the centre is that officials are happy with what they have seen and have concluded that the play should start from 3:30 PM IST.

Not Raining anymore: So the covers have been peeled off. Few playrs have started to walk out into the middle. As per BCCI, the inspection has been scheduled at 2:50 PM IST

Wet Outfield: So the day starts with the pitch under covers. It has been a cloudy day anyway but early morning in Southampton gave some hope with rain staying away. The wet outfield means that the contest won't start on time though.

India batting coach thinks a score above 250 will be reasonable: “We’re looking to play sessions well. If we can do that, anything more than 250 will be a reasonable score in these conditions," Rathour said. “Once the ball got older, it swung more. They hit better areas as a bowling unit as well. But once again, in the last session you saw the runs were coming as well. That’s how the game will go, you will always have something for the bowlers. We’ll have to bat sessions." Read more here

Southampton Weather Update: It's damp and dark in Southampton. Sun still hiding behind the clouds. Not raining though.

Shubman Gill made his Test debut during India’s epoch-making Australia tour of 2020-21 when they bounced back to win a four-match series 2-1. Since then, the 21-year-old has logged 378 runs including three half-centuries with his stroke-making and temperament delighting experts. Sunil Gavaskar reckons Gill has the temperament to become a great player. Read more here. 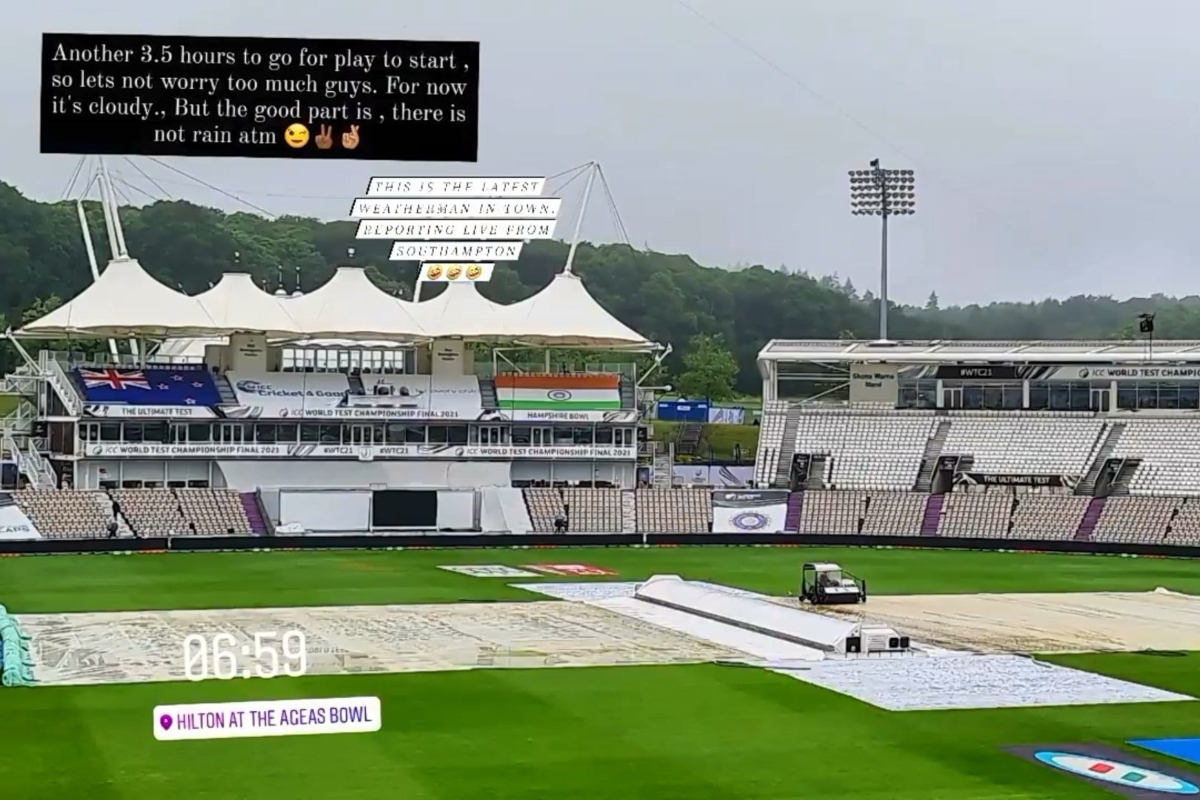 Shane Warne, widely regarded as one of the greatest bowlers to have graced the game, was asked by a fan on Twitter whether he understands how spin works. In the now viral tweet, the user was responding to Warne expressing his disappointment at how New Zealand should have played at least one spinner in the ongoing ICC World Test Championship final against India in Southampton.  Read more here

Weather Update: Well, reports suggest that there's a cloud cover over Southampton but no rain. If this stays. we might end up having an entire day's play.

Bat With a Ghajini Mindset: Well, Wasim Jaffer is at it again. He has advised India to bat with the mindset of 'Ghajini' - a popular Bollywood movie. But what does he mean by that? Well, he wants the batters to completely forget the last delivery they have played and focus on the next one. Read more here.

Meanwhile, Dinesh Karthik has created a storm with a smashing debut in the commentary box. His analysis and wit has been an instant hit with fellow commentators and fans praising him. Karthik’s comments are going viral and fans just can’t get enough of him. Read more here

Southampton weather update at 9:45 am IST: Well, there's some cloud cover and possiblity of light rain.

Warne Warns New Zealand: New Zealand have taken the field without a spinner whereas India have two tweakers in their eleven. And Shane Warne thinks ignoring spinners could come back to bite the Kiwis. “Very disappointed in Nz not playing a spinner in the #ICCWorldTestChampionship as this wicket is going to spin big with huge foot marks developing already. Remember if it seems it will spin. India make anything more than 275/300 ! The match is over unless weather comes in !" Warne posted on his Twitter handle.

Here's the forecast for Sunday. It will rain in the morning. So don't keep your hopes high folks

Hello everyone! And welcome to our live coverage from the ICC World Test Championship Final which is currently underway (sort of) in Southampton between India and New Zealand. Weather continues to have a larger say in the contest with just 64.4 overs of play possible across two days. At least Day 2 wasn't a complete washout. Fingers crossed that the improvement will continue on Day 3 and hopefully there will be uninterrupted action. 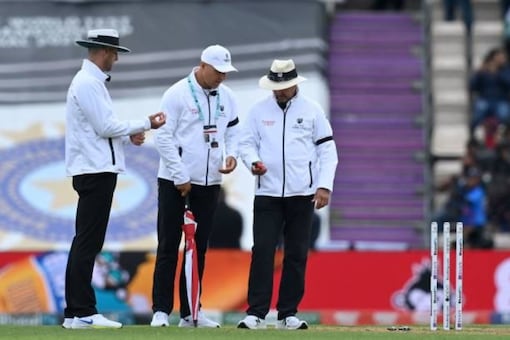 Southampton Weather Today Updates, India vs New Zealand, Day 3, June 20, Sunday: After Friday’s first day was washed out without a ball bowled, India had reached 146 for 3 when bad light led the umpires to take the players off the field a little while after Tea. It was the third time bad light had caused a stoppage in play, leading to frustration among fans, especially ones at the Ageas Bowl stadium.

Kohli was 44 not out off 124 balls and Ajinkya Rahane 29 not out, involved in an unbeaten 58-run stand. Kyle Jamieson, Neil Wagner and Trent Boult got one wicket each. Jamieson was fantastic, bowling 14 overs for only 14 runs.

Fans at the Hampshire Bowl resorted to boos after the third session of the second day’s play in the World Test Championship (WTC) final between India and New Zealand was interrupted by poor light for the third time in a day.

Rohit Sharma (34 off 68) and Shubman Gill (28 off 64), opening for the first time in England, showed remarkable application against the moving ball to share a 62-run stand before Kohli (44 not out off 124) came into his own with a steely knock to take India to 146 for three at stumps on a start-stop second day.

The skipper got good support from Ajinkya Rahane (29 not out off 79) in the final session where bad light stopped play twice before umpires called it a day. A total of 64.4 overs could be bowled on Saturday including only 9.1 in the final session. The opening day was washed out.

As expected, Kohli was ready for the challenge posed by an all seam attack on an overcast day. He played late and close to his body, was happy to leave balls outside the off stump and cashed in on the slightest of scoring opportunities.

His only boundary, a sublime cover drive off Neil Wagner, came before lunch but kept the scoreboard ticking with twos and threes.

Kohli’s deputy Rahane did not start convincingly but his feet movement and shot selection got better as his innings progressed. Three of his four boundaries came post tea.

India, who had reached 69 for two at lunch, was only able to add 51 runs in the afternoon with the loss of Cheteshwar Pujara (8 off 54).

With the Dukes ball moving around, Kohli paid due respect to the bowlers including Colin de Grandhomme, who bowled three successive maidens to the India skipper.

With all the fast bowlers making the ball talk, Kohli was patience personified but was quick to pick up runs when bowled into the pads.

Pujara at the other end took 36 balls to open his account. Like Gill earlier in the day, Pujara too was hit on the helmet but the blow from Wagner did not seem to bother him much.

Soon after, the gritty batsman was trapped in front by another left-armer Boult, who swung it back enough sharply to beat the batsman.

In the 41st over bowled by Boult, Kohli wasn’t amused when the umpire decided to seek third umpire’s help for a caught behind appeal even though New Zealand did not go for the DRS.

In the morning, Rohit and Gill staved off the initial swing threat posed by the opposition pace attack before New Zealand fought back by removing the openers towards the end of the session.

Cool and overcast conditions at the Hampshire Bowl on day two made it a no-brainer to bowl first and Kane Williamson did just that.

India decided to stick to the playing eleven they announced two days ago despite change in conditions while New Zealand went in with a four-prong pace attack at the expense of a specialist spinner with all-rounder de Grandhomme being the fifth seam bowling option.

Rohit and Gill came into the middle with a clear gameplan.

As he often does, Rohit batted with an open stance to negate left-arm pacer Boult’s trademark inswinger while Gill stood outside his crease to tackle Tim Southee’s outswinger. There were times when Gill was not afraid to come down the track.

Gill, who had played the short ball extremely well in his debut series in Australia, pulled Boult off the front foot for India’s first boundary of the final.

Rohit got going with a couple of fours off Southee in the following over, first a cut through the point and the other one was a thick edge past the slip cordon.

The young Gill took a nasty hit on his helmet grill after Jamieson caught him by surprise with a sharp bouncer.

The lanky pacer was the one who provided the much needed breakthrough by having Rohit caught at third slip with Southee taking a terrific catch. Wagner sent Gill back in his very first over with the one angling away and straight into the hands of B J Watling, who had a brilliant day behind the stumps.