England vs Pakistan, 2nd Test at Southampton, Day 5, As it Happened: Match Ends in Tame Draw

England vs Pakistan 2020 Live Score, 2nd Test at Southampton, Day 5, Eng vs Pak latest updates: And that's the end to the game, completely affected by rain. Azhar Ali runs in to bowl a delivery after which players end proceedings. It's bright now, but the last few days were wet which means the game ends in a draw.

And that's the end to the game, completely affected by rain. Azhar Ali runs in to bowl a delivery after which players end proceedings. It's bright now, but the last few days were wet which means the game ends in a draw.

WICKET! Yasir Shah gets Pope. Skids on, hits pad first and then bat. Pope reviews thinking it's bat first but it's not. Plumb in front, England 105/4.

WICKET! Sibley is gone. Abbas slides this down leg side, Sibley gets a faint edge and Rizwan takes it. England 92/3.

Out Lbw!! Abbas has deserved this wicket. He has been accurate and beat the bat numerous times and finally he manages to beat Crawley. Good length ball that straightens late, Crawley was playing for the original angle and ended beaten on the outside edge, the ball strikes him on the back pad and the only question was height, umpire Richard Kettleborough thought it was hitting and ball-tracking shows it was clipping.

FOUR, fifty for Crawley. He has been positive and made the most of the opportunity. Yes, he did get a reprieve but apart from that he has looked good. The attempted slider ends up as a long hop, Crawley pulls it in front of square past mid-wicket and there's no one in the deep to stop the boundary

Crawley and Sibley continue to bat on. 12 runs of the two overs of Yasir and Shaheen. England 69/1 on Day 5.

Yasir Shah and Shaheen Afridi in tandem. England have found the going easy so far. This game is heading towards a draw, but the positives gained from this passage of play will stand them in good stead for the third Test.

Naseem Shah is working up some good pace and bounce. He's bowling short ones from around the stumps into Sibley's ribs. Handled well so far.

A change of bowling, Naseem Shah comes on. Can he provide the breakthrough? England 33/1.

Abbas and Shaheen Afridi in tandem, but no wicket yet. Tame, dull draw? Or will we see an action-packed draw?

And finally, we've got some play. Mohammad Abbas with the ball to Zak Crawley.

Play to start at 3.20 PM local time, which is 7.50 PM IST. Unless it rains again! Not that the game is going to give a result, but they have no option but to play if the conditions are good.

No rain, but there will be another inspection at 14.20 local time.

Lunch is taken, and another inspection will be held at 13.40 local time. This is heading nowhere...

"I think we've seen with the history of the pink ball under lights, it's been very tricky for the batsmen and would be unfair to the balance to the game," he said. "If you were 300 for three and it got dark and the pink ball came out, you could lose five for 10. That's going too far. If the players' safety is in doubt, the officials have to bring them off. If they think it's safe, you play."

Pink balls are used in day-night Test cricket with teams playing under floodlights. The ICC leaves it "solely for the umpires together to decide" whether bad light mean that "it would be dangerous or unreasonable for play to take place." Broad, however, feels use of pink ball will be unfair to the batsmen.

"Those that are paid the big cheques for the broadcast have got to step up and say to the ICC 'this isn't good enough -you've got to come up with a solution that allows the game to be played in conditions like these'." Spin legend Shane Warne also supports the use of pink ball. "Absolutely! I've said the same thing for a long time now ! Pink ball for test matches ASAP please ! Agree followers?," he tweeted on Friday.

"It's a terrible look for the game. The more I watch this, particularly in England, the pink ball could be the solution - just play with it all the time," said Vaughan, who has featured in 82 Tests and 86 ODIs for England. Vaughan, who has captained England in 51 Tests, said: "It's been a summer where I've seen the light being taken more than any other summer I can remember. In a summer where the game desperately needs cricket to be on, it just doesn't make sense.

Former players have often questioned the ICC regulations related to bad light which has affected Test matches over the years. Last month, former England captain Nasser Hussain had said that ICC need to revisit its regulations after bad light and rain affected the opening day of the first Test between England and the West Indies here. Former England captain Michael Vaughan believes the use of pink ball in Test matches could help in avoiding play being lost to bad light.

Pakistan batsman Mohammad Rizwan said he was ready to continue to play. "I was ready to play but the decision rests with the umpires and they have the responsibility to ensure no one gets injured. They have to go by the light meter. It's the same for both teams," said Rizwan, who scored an unbeaten 60.

But Broad, who has also taken three wickets so far in the second Test just like Anderson, had a different view. "The officials were right to bring us off. It had dropped below the darkness that we had come off for earlier in the day and all of our fielders were saying: 'We wouldn't want to bat in this, this is quite dark'," Broad told BBC.

"It was gloomy but it's one of those when it didn't seem like the batmen were struggling too much. I don't know what the reading was (at tea). Maybe there could be a bit more leeway there," Anderson was quoted as saying by 'The Guardian'. "The light has been gloomy all day and we've been lucky to get the play we have. It did feel like the floodlights were pretty prominent. The umpires take their readings, we can only go off that so there's nothing more we can do about that."

England fast bowler James Anderson has called for more "leeway" over bad light decisions after the second day of the second Test against Pakistan was hit by numerous delays befofe winding up early due to poor lights. Only 40.2 overs were possible on the second day which was called off at 6:27pm due to bad light, leaving the pace duo of Anderson and Stuart Broad frustrated as Pakistan reached 223 for 9 at stumps on Friday.

Hello and welcome to fifth and final day of the second Test between England and Pakistan. There is no doubt that this match is heading for a draw as we are only in the second innings right now. But hopefully for players and the fans there is some action on the cards. 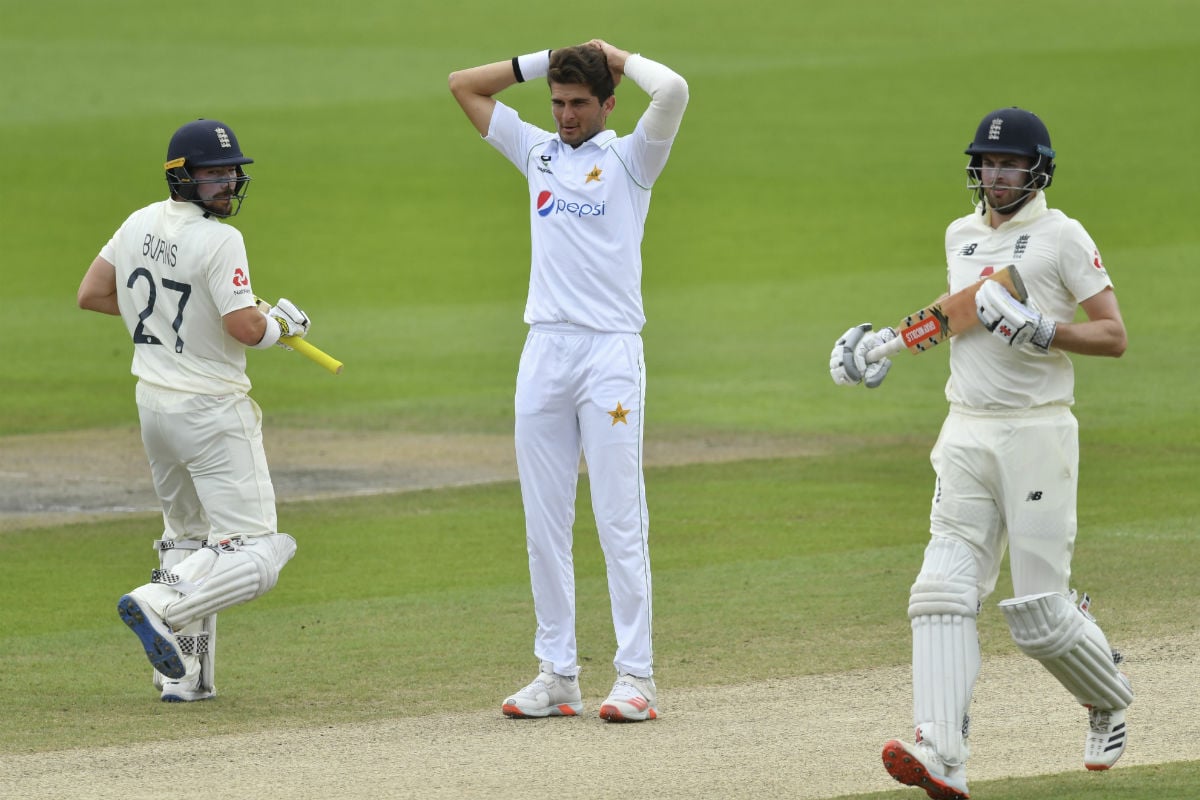 England vs Pakistan 2020 Live Score, 2nd Test at Southampton, Day 5, Eng vs Pak latest updates: And that's the end to the game, completely affected by rain. Azhar Ali runs in to bowl a delivery after which players end proceedings. It's bright now, but the last few days were wet which means the game ends in a draw.

"The light has been gloomy all day and we've been lucky to get the play we have. It did feel like the floodlights were pretty prominent. The umpires take their readings, we can only go off that so there's nothing more we can do about that."

DAY 4 Review: England Pakistan claimed the wicket of opener Rory Burns for a duck on Sunday to leave England seven for one in their first innings, but rain forced an early close to day four in the rain-hit second test at the Rose Bowl. A little over an hour’s play was possible at the start of the day before rain forced the players from the field, and with more bad weather predicted for Monday, the match is meandering towards a tame draw. England bowled out the tourists for 236, with top scorer Mohammad Rizwan (72) being the last Pakistani batsman to be dismissed, and then managed only five overs of their reply. That was enough time for Burns to lose his wicket as he was caught at second slip by Asad Shafiq off the bowling of Shaheen Afridi in the bowler-friendly conditions.

It was another failure for the left-hander in the series after he managed scores of four and 10 in the first test. Dom Sibley (2 not out) and Zak Crawley (5 not out) will continue the innings if play is possible on the fifth day. Pakistan had resumed on 223 for nine, the first bit of action since just before 5pm on Friday afternoon, with Rizwan flashing his bat in an attempt to score quick runs. He added 12 to his total before he was caught by Crawley at cover point trying to hit Stuart Broad (4-56) to the boundary.

Broad’s figures were the best in the innings, followed by James Anderson (3-60), who answered a number of his critics following questions over whether he should retire after a poor last test in Manchester. England won that game by three wickets and lead the three-match series 1-0. The final test will start in Southampton on Friday.