India will now aim to seal a whitewash on Sunday.

Another win in the Super Over 🙌🙌 #TeamIndia go 4-0 up in the series. 🇮🇳🇮🇳 #NZvIND pic.twitter.com/G6GqM67RIv

INDIA WIN THE FOURTH T20I! KL Rahul starts with a six and a four but holes out on the third delivery. Kohli takes two off the next ball thanks to some smart running and follows that with a boundary. India lead the series 4-0.

Seifert and Munro are the batsmen out for New Zealand. They start with a double that comes about due to Shreyas putting down a catch in the deep. Seifert then gets a boundary before KL Rahul puts down a tough catch running backwards, granting the hosts two more runs. Seifert finally perishes when he sends one high and the catch is taken by Washington Sundar at third man. Munro cuts one away for four on the fifth ball and the over ends with a dot ball. India need 13 to win.

OUT: Are we heading into another super over? A slower one and Shardul has another wicket here. Micthell has thrown his wicket away as Kiwis are 164/6. Just one needed from one.

Shardul comes on for the last over. He has six runs to save. And Ross Taylor has thrown his wicket away. He goes for the glory shot and Iyer takes a good catch.

India would be joping for another miracle, just like in the previous match. India hasn't been able to put pressure on the opposition regularly. The score has moved to 155/3 now.

Runs are coming easy for the Kiwis. Now there in no stopping them. Shardul starts a fresh over and is greeted with a boundary by Taylor.The score now moves to 145/3 now.

MISS: India are still in need of wickets and Saini spills one on the boundary. This is not good effort by them on the field and then Bumrah drops one. Kiwis are 122/3.

OUT: Tom Bruce is bowled around his legs. Chahal keeps the ball outside leg, and it turns viciously to castle him for 0. India making a comeback here in the match. The score moves to 97/3.

OUT! What just happened?! Kohli collected a throw from the deep and fires one at the striker's end, where Munro was running. Direct hit and the southpaw has to walk! That is a gamechanging moment right there.

FOUR: Saini continues. India need a wicket here now. Seifert and Munro have been batting well together. The partnership is already worth 70 now. After 11 overs India are 92/1.

FOUR, SIX! Washington Sundar's first over is an expensive one, going for 15. His first ball sees Seifert get a boundary with a hard drive and he then bowls a loose full toss and Munro slams it over backward square leg for a maximum. The southpaw has looked in good touch so far.

Yuzvendra Chahal bowls the first over after the Powerplay and it is a decent one, as he gives away just 4 runs. At this point India are in total control of the match and New Zealand will need a few big overs to get back in it.

SIX, FOUR, FOUR! Munro starts the final Powerplay over with a six then follows that with two boundaries, one over mid-off and the other past mid-on. Thakur would be disappointed in what was some ordinary bowling on his behalf.

OUT: Guptill top-edges one from Bumrah and Rahul takes a simple catch. The batsman is out for 4 as Kiwis lose their first wicket. It's 22/1.

SIX! You got the feeling that something had to give and it did. Saini bangs one in short that doesn't bounce as much and Munro pulls it for the game's first six. The hosts will need more of those. 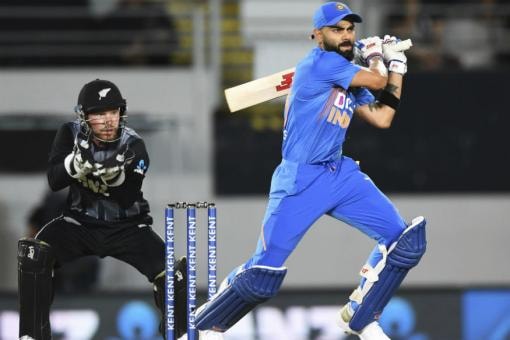 IND v NZ 4th T20I Latest Update: INDIA WIN THE FOURTH T20I! KL Rahul starts with a six and a four but holes out on the third delivery. Kohli takes two off the next ball thanks to some smart running and follows that with a boundary. India lead the series 4-0.

Preview: The T20I series against New Zealand done and dusted with the thrilling Super Over win in the third game in Hamilton, India will look to test their bench in the upcoming two matches, beginning with the fourth one in Wellington. Virat Kohli mentioned at Hamilton that the likes of Washington Sundar and Navdeep Saini could be in the reckoning for places in the fourth match, thus expect a few changes from the Indian side. India can afford to do that too, for they're on a roll with three victories in three matches in New Zealand. The first one was a tightly contested high-scoring game, the second was a one-sided affair, while the third was as thrilling as it gets. India stuck to the same XI through the three matches, and almost every one of them got a good performance in. India's challenge now is to maintain the momentum even while changing their winning combination.

The one likely to make way for Saini would be Shardul Thakur, while Yuzvendra Chahal or Shivam Dube could move out for Washington. Mohammed Shami's brilliant final over on Wednesday would mean he stays on, while Jasprit Bumrah is always going to be the number one pacer although he was costly in the third match. Unless India decide to manage his workload, since he's a part of all formats, Bumrah should feature in the XI. India's batting has been on a roll, with nearly everyone chipping in. Rohit Sharma failed in the first two matches but came back with a bang in the third game, smashing 65 off 40 in the actual match before hitting two sixes in the final two balls of the Super Over to seal a thrilling win. India could also look at one of Sanju Samson and Rishabh Pant, perhaps giving Shreyas Iyer a break. Iyer has done enough to seal a middle order spot for the longer run, and India might use the opportunity to give more game time to Manish Pandey.

Both teams spent Thursday travelling from Hamilton to Wellington, and with a similar tight schedule for the final game of the series as well, there seems to be little chance of nets for either match. For New Zealand, there is a straightforward change coming up. Colin de Grandhomme is no longer with the squad, giving up his spot for batsman Tom Bruce. This could be an easy swap for the hosts given that they have been light in the middle order during the past three matches. There is also a school of thought that Kane Williamson should move up top. Given his batting master class in the Hamilton T20I, there is potential for him to open the innings with Martin Guptill with Colin Munro sliding down. Mitchell Santner was promoted on Wednesday night to add more momentum to the innings, and it remains to be seen if it was a one-off ploy or something the Black Caps could consider experimenting with.