Team India will be seeking retribution after they were trounced by Australia in the first encounter of the three-match T20I series in Mohali. The two sides will clash at the VCA Stadium in Nagpur for the second T20I on Friday, September 23.

Rohit Sharma’s men were thumped by four wickets owing to their dismal death bowling. Without their ace pacer Jasprit Bumrah, India has leaked runs in the final overs, costing them crucial matches. The story was no different in the Asia Cup and the horrific bowling form seems to continue as the Australian batters led by Cameron Green and Mathew Wade hammered the Indian pacers all around the park.

Also Read: Nowadays People are So Worthless, Nobody Cares about Your Existence: Bhuvneshwar Kumar’s Wife in Cryptic Post on Instagram

Things were pretty all right on the batting front as India stuck with their recently adopted all-guns blazing mantra. Opener KL Rahul shut any criticism that came his way as he smashed a sumptuous fifty. Suryakumar Yadav continued his purple patch and was unlucky to miss out on another terrific half-century, falling short by four runs.

It was again the ace all-rounder Hardik Pandya who hogged the limelight. The flamboyant all-rounder obliterated the Aussie bowlers smashing a 30-ball 71 to take India to a mammoth score of 208 runs. However, a poor bowling display handed India a thumping defeat in the first match.

India will now want to secure a win and level the series on Friday. On the other hand, Aaron Finch and his men will be eager to gain an unassailable lead and bag the T20I series.

The second T20I match of the bilateral series between India and Australia will be played at the VCA Stadium in Nagpur on Friday, September 23. The temperature in Nagpur will hover around 28 degrees Celsius and there might be showers during the course of the match. 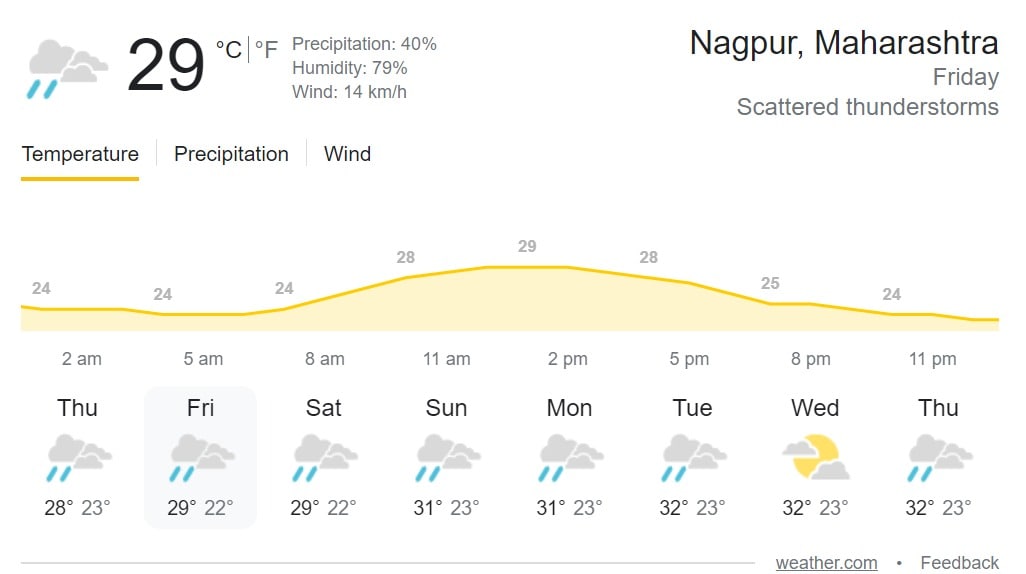 Rain could interrupt play as there is a 65 per cent rate of precipitation projected for Friday. The wind speed is expected to be around 15 km/h and the humidity rate will be around 65 percent on the match day.

The Nagpur pitch is expected to be a flat surface suited for batters. The pacers will get some help from the deck and the ball might swing in the early overs. Batting is usually easier in the first innings as the pitch has the nature of slowing up in the second innings. This is backed by the average second innings score of 128 on this surface. The outfield will be lightning-fast and once the batters clear the infield, the ball will race away to the boundary.