Check New Zealand vs Pakistan 2nd Test, Day 4, Match Highlights Online NZ vs PAK : OUT! CAUGHT! THAT'S THAT! Boult grabs the last wicket! He bowls this full and on the pads, Gohar looks to flick this one but does so uppishly towards the fine leg region. 186/10 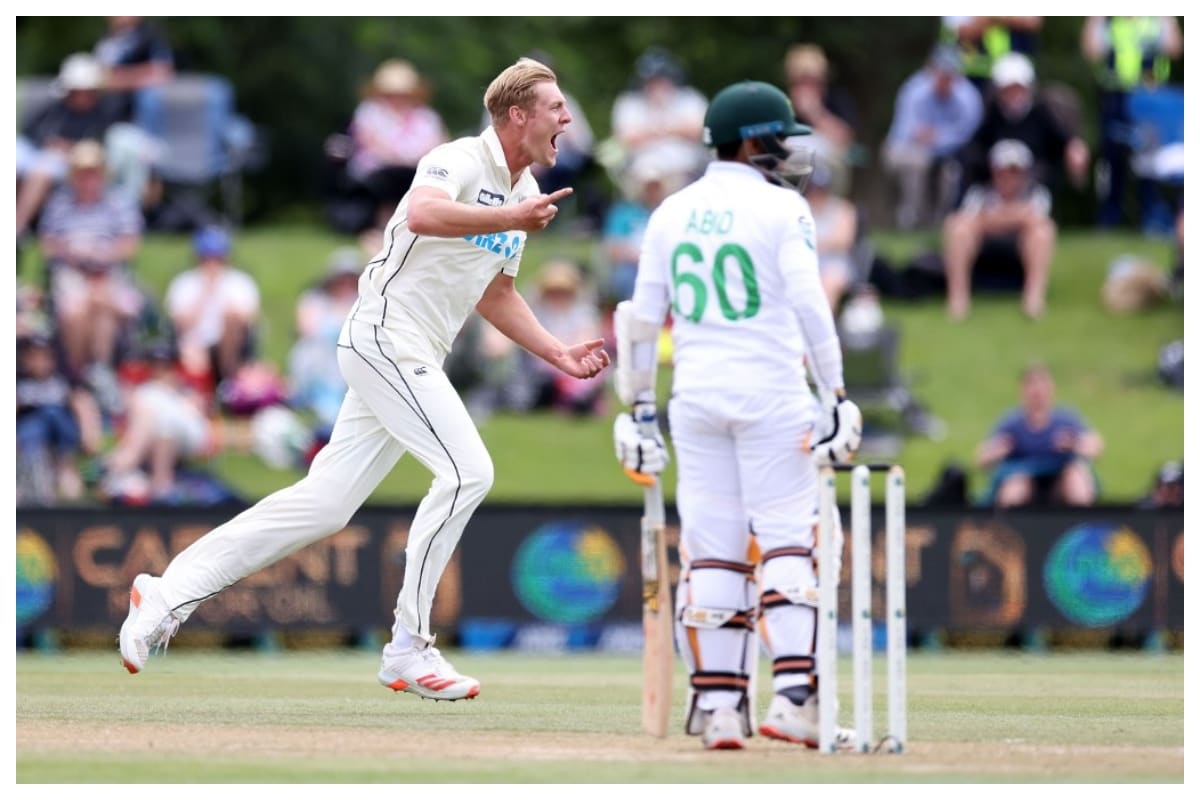 New Zealand vs Pakistan Match Highlights, 2nd Test, Day 4, NZ vs PAK: The Pakistani openers had 11 overs to play with at the end of Day 3 and they lost Shan Masood heading into Day 4. And in the penultimate day, it was all Jamieson again, who scalped 6 wickets to his name and Pakistan were bowled all out for 186. A well deserved victory for the hosts and they will be very happy

After this, it was all New Zealand. They came out to bat in the first innings with intent and that showed. They lost three wickets quickly and were at 71/3 at one stage. But then the duo of Williamson and Nicholls stitched an amazing partnership of 369 runs for the fourth wicket, which also saw Kane reach his fourth double century and Nicholls, reach his 7th International Test century. After these two fell, Daryl Mitchell took it upon himself to prove a point as he and Jamieson went hammer and tongs and in that process, Mitchell also reached his maiden Test century for the Black Caps. All these batting contributions saw the Kiwis end up 659 on the board with a lead of 352 to their name.

Rewinding the clock slightly, Pakistan were put to bat first in the first innings. It was all about Azhar Ali who held fort at one end and watched his teammates depart one after the other. Then, he got a good partner in Rizwan and together these two played some good cricket and steadied the ship for the visitors. Ali reached his 93 but was not able to cross that triple digit mark, while Rizwan reached his half-century. After both of them fell, good contributions from Zafar and Ashraf saw them reach a competitive total of 297. It was Kyle Jamieson who was the star with the ball in hand, who grabbed a 5-fer. Southee and Boult too, snared a couple of wickets to their name.

A comprehensive show with the bat, with the ball and all around the field has ensured that the Kiwis win this game by an innings and 176 runs and they also complete the whitewash over their sub-continent counterparts as they win the Test series 2-0. Kane Williamson should be pleased with how his boys have fared in this series. This win also sees them top the World Test Championship Table. Chants of 'Number one, Number one' are ringing around the ground. Terrific stuff from the Black Caps.

New Zealand claimed two Pakistan wickets before lunch on the fourth day of the second test to edge closer to a fourth straight test win of its home summer.

Pakistan, which resumed its second innings at 8-1 and still 354 runs behind New Zealand, was 69-3 at the break Wednesday. Azhar Ali was 27 not out and Haris Sohail was unbeaten on 10.

New Zealand declared its first innings Tuesday at 659-6 in reply to Pakistans 297, a lead of 362. Resuming Wednesday, Pakistan faced the task of having to bat two full days to save the match or to build a massive second innings to force New Zealand to bat again.

Kyle Jamieson claimed the wicket of Shan Masood (0) before stumps on the third day to send Pakistan into the fourth day with nine wickets intact.

Jamieson claimed one of the two wickets to fall in the morning session, bowling with accuracy and menacing bounce. He conceded only four runs one scoring shot from six overs before lunch, dismissing overnight batsman Abid Ali.

So far Jamieson has taken 12 wickets in the two-test series against Pakistan at a cost of 145 runs, or an average of 12.1, and 23 wickets in New Zealands four home tests this summer at 12.5.

Trent Boult had the first success of the New Zealand bowlers Wednesday, dismissing night watchman Mohammad Abbas for 3 when Pakistan was 17-2. Abbas survived 29 balls before feathering a catch to wicketkeeper B.J. Watling.

Azhar Ali and Abid Ali looked settled at first and took Pakistan on to 46-2 before Jamieson struck. Abid tried to steer a ball backward of point and substitute fielder Will Young took a superb catch diving full-length from gully.

Jamieson repeatedly troubled the batsmen with balls which stood up sharply from a close to a length. He angled the ball dangerously across the left-handers or into the right-handers, compelling a shot at least in defense.

Pakistan was still 293 runs behind New Zealand at lunch.