West Indies have the second-worst win-loss ratio (only better than Sri Lanka) since their historic win in the World T20 in Kolkata in 2016. 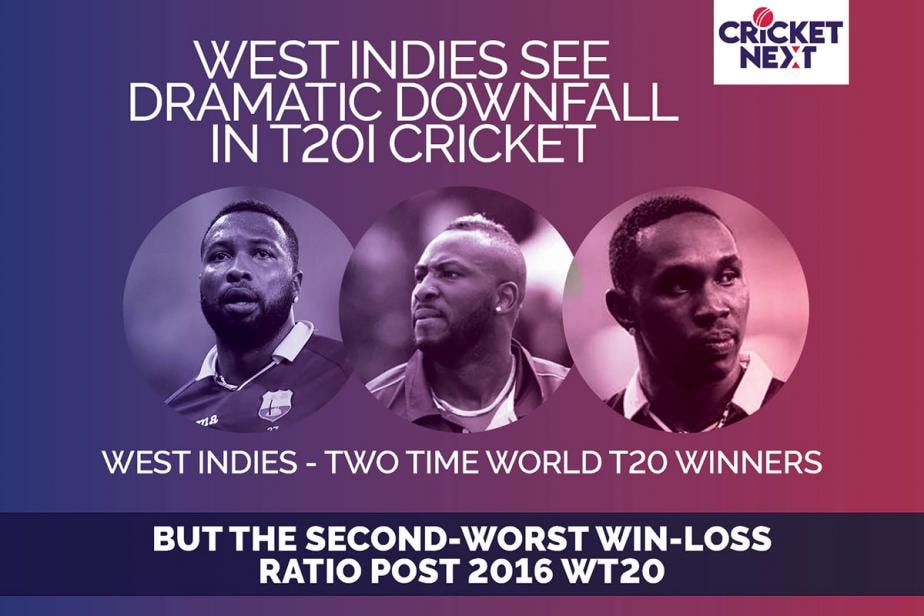 April 3, 2016, Eden Gardens, Kolkata: Needing 19 off the last over, Carlos Brathwaite did the unthinkable as he hammered four consecutive sixes off the bowling of Ben Stokes to take West Indies to their second World T20 title - they became the first team (and remain the only one) to have claimed the coveted title twice. West Indies had made the format their own and with a plethora of superstars amongst their ranks, were almost unbeatable in T20 cricket.

Fast Forward to November 30, 2020: New Zealand beat West Indies 2-0 in a three-match T20I series at home. It is the 11th bilateral series loss (two or more matches in a series) for the West Indies in 16 such series since the World T20 in India. From the top of the world they have come crashing down in a format most suited to their style of play. Brotherly Love: Dwayne Smith Smashes Kemar Smith For Six Sixes In An Over

West Indies have the second-worst win-loss ratio (only better than Sri Lanka) since their historic win in the World T20 in Kolkata in 2016. They have lost as many as 30 (and won just 16) of the 50 matches they have played in this time-frame. West Indies have played 16 bilateral T20I series (two or more matches in a series) during this period and lost 11 including defeats to Bangladesh at home/USA in 2018 and Afghanistan in India in 2019. Three of their 4 series' wins in this period have been against Bangladesh, Afghanistan and Sri Lanka.

One of the major reasons for the debacle of the West Indies in the format since WT20, 2016 has been the constant changing and chopping of their international squad and the lack of consistency in playing as a unit. Some of the biggest superstars - the likes of Pollard, Gayle, Bravo, Russell - all play for major T20 leagues all over the world - but are often absent from the West Indies T20I XI.

Amongst the big names, Pollard has played the maximum number of matches for the West Indies since April, 2016 - 31 of a possible 50 that the team has played during this period. Hetmyer has played 27, Pooran - 24, Simmons - 18, Narine - 17, Dwayne Bravo - 10 and Gayle a shocking 8! When the best in the business in the world are not part of your T20I set up for a majority of the matches it is not surprising to see the fortunes of a world class team dwindle so quickly. Even when these superstars have represented West Indies in T20s during this period, their performance has been well below par and no where close to their impressive numbers in major T20 leagues of the world - like the IPL, BBL, SLPL, PSL etc. Again, not surprising, as most of these big names associate more with their T20 franchise than the West Indies as a unit. West Indies has a combined batting average of just 20.43 and strike rate of 123.35 in this period - the second-worst for any major team only after Sri Lanka. Their numbers are even worse than Bangladesh and Afghanistan!

The bowling hasn't fared much better either. Their collective bowling average of 28.47 and strike rate of 20.4 are amongst the worst and only better than Bangladesh and Sri Lanka in the period. West Indies have managed to bowl out the opposition in just 8 of the 50 matches they have played in the last four and a a half years. In as many as 26 of the 50 matches, the West Indies bowling unit failed to dismiss more than half of the opposition. They conceded a 180-plus score on 15 occasions.

With the World T20 in India less than a year away, West Indies need to put their house in order if they are to even challenge the top teams and have any chance of defending the world title.