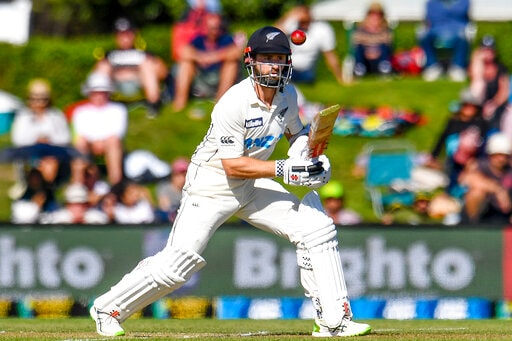 Kane Williamson posted his fourth double century and was out for 238 as New Zealand extended its lead over Pakistan to 302 runs during the rain-affected session between lunch and tea Tuesday on the third day of the second cricket test.

Two rain delays during the middle session punctuated New Zealands push to a decisive first-innings lead but when tea finally was taken at 5.35 p.m. local time, New Zealand was 599-6 in reply to Pakistans 297. Daryl Mitchell was unbeaten on 69.

Williamsons marathon innings ended just before the break when he played a tired shot and was caught by Shan Masood from the bowling of Faheem Ashraf. He had batted more than 9 1/2 hours, coming to the crease in the 20th over of New Zealands innings early on the second day; he left 131 overs later.

Williamsons steely temperament prevented him becoming disconcerted when rain forced players from the field for an hour when he was 177 and then for 15 minutes immediately after a delayed drinks break when he was 199.

On a gloomy day at Christchurch’s Hagley Oval the new floodlights, installed mainly for this years Womens World Cup, were turned on for the first time shortly before 4 p.m.

Under their artificial glow, Williamson moved onto his double century from 327 balls, in just under nine hours with 24 boundaries. Williamson has played in only three tests this season, posting scores of 251, 129 and 238 to underline his rise to the No. 1 ranking among test batsmen.

For New Zealand fans, some of whom wear sailor hats bearing the legend Steady The Ship a tribute to Williamsons dependability the disappointment is that this match is the last of only four tests New Zealand will host this summer. Under the influence of crickets three main powers, New Zealanders continue to be deprived of test matches and Williamsons ability to display his skill.

During this innings he surpassed 7,000 test runs, becoming only the third New Zealander after Ross Taylor and former captain Stephen Fleming to reach that mark. Williamson currently captains New Zealand in all three formats but it is in tests where his composure and his powers of concentration mark him out as extraordinary.

Pakistan enjoyed some success during a long afternoon in the field, ending the 369-run partnership between Williamson and Henry Nicholls when Nicholls was out for 157. Wicketkeeper B.J. Watling (7) was also out early in the session.

The partnership between Williamson and Nicholls was the third-highest for New Zealand for all wickets against all countries.

Williamson and Mitchell then produced a century partnership from 133 balls which added to the weight of New Zealands first innings lead and the burden on Pakistan. Mitchell brought up his second half century from 73 balls.

By tea Pakistan had bowled 154 overs and Williamson had the privilege of deciding when he would put the weary tourists back in to give his fresh bowlers a shot at the top order before stumps.