Back to News18
Home » Cricket Home » News » Yearender - Obituaries: From Dean Jones to Bapu Nadkarni, Cricket Lost Many Icons in 2020

Yearender - Obituaries: From Dean Jones to Bapu Nadkarni, Cricket Lost Many Icons in 2020

The year 2020 witnessed the tragic deaths of some famous cricket personalities - great batsmen, bowlers and commentators. The news of Dean Jones passing away due to a stroke in a Mumbai hotel in September, 2020 shocked the cricketing world. We look back at the career and contributions of 10 cricketers who breathed their last in 2020. The year 2020 witnessed the tragic deaths of some famous cricket personalities - great batsmen, bowlers and commentators. The news of Dean Jones passing away due to a stroke in a Mumbai hotel in September, 2020 shocked the cricketing world. We look back at the career and contributions of 10 cricketers who breathed their last in 2020.

The tragic death of the great Australian batsman, Dean Jones, came as a big shock to the cricketing fraternity. Jones died of a stroke at the age of just 59. Jones played 52 Tests for Australia scoring 3631 runs at an average of 46.55 including 11 hundreds. But it was his record in ODI cricket – 6068 runs in 161 innings at an average of 44.61 with 7 hundreds and as many as 46 fifties – which was outstanding! Not only for his generation but in the history of ODI cricket.

According to Impact Index (a holistic cricket stats system which accounts for context in performances), as on 5th November, 2016, Dean Jones was the second-highest impact batsman in the history of ODI cricket, only after Viv Richards! He raised his game on the biggest stage in the matches that mattered the most – matches that defined the outcome of a series/tournament. This big-match temperament gave Jones a very high impact in ODI cricket – higher than some of the other big names during his generation and batsmen before and after. Jones gave 6 Series-Defining (SD) Performances during his ODI career. Although the turning point for him came in the Benson and Hedges Challenge, 1986-87 where he scored two successive hundreds at Perth on two consecutive days, it was not until 1990 till he gave his first SD - 83 vs Pakistan in the first final of the Benson and Hedges World Series at the MCG in February.

Jones also played a significant part with the bat in Australia’s historic World Cup win in the sub-continent in 1987. He scored 314 runs in 8 innings at an average of 44.85 including 3 fifties. He was very consistent and failed just once in 8 matches in the tournament. From the 1987 World Cup till the end of the Benson and Hedges World Series in Australia in January, 1994, Jones was the most impactful batsman in the world also with the highest average of 47.79 (min. runs 1000). His aggregate of 4493 runs in 110 innings in this period was also the highest. 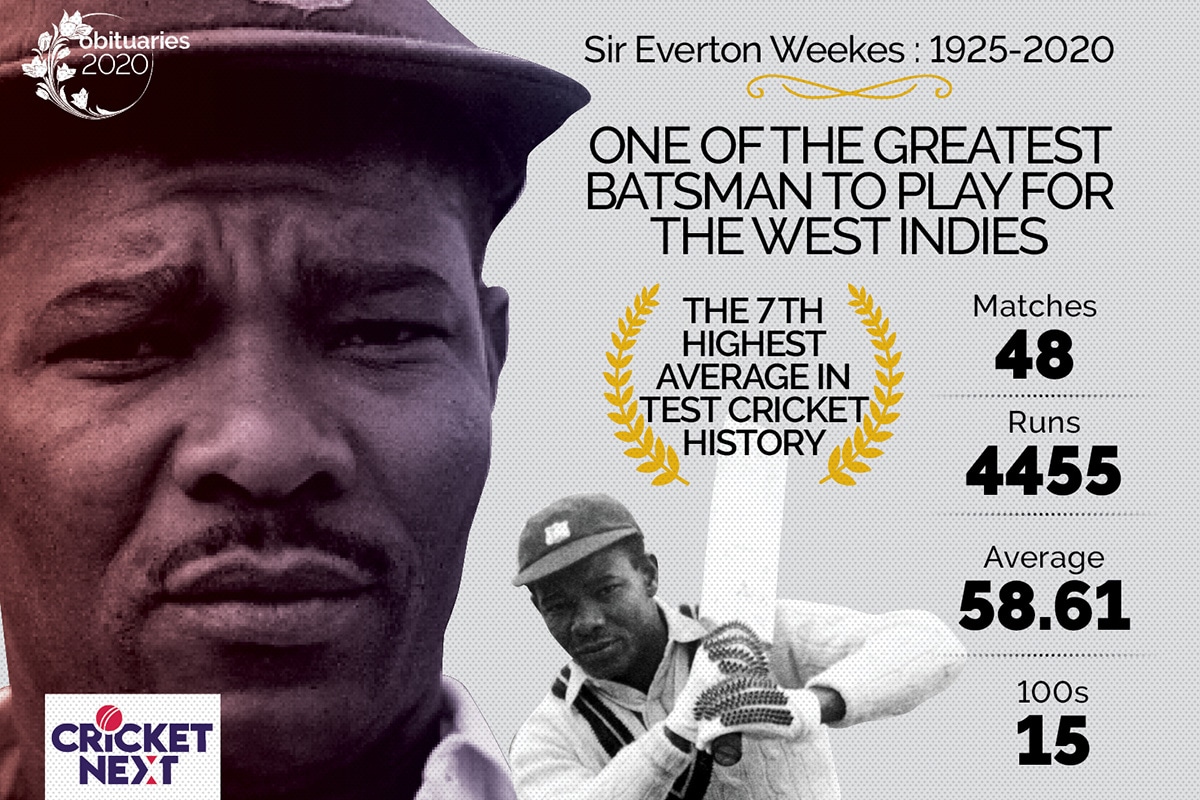 An all-time great batsman, Sir Everton Weekes, was one of the famous three 'Ws' of the West Indies who played 48 Tests for them between 1948 and 1958. Weekes had a brilliant Test record and aggregated 4455 runs in 81 innings at an average of 58.61 with 15 hundreds. Weekes had a great record against India and had aggregated 779 runs in 5 away Tests (7 innings) against them at an average of 111.28 including 4 hundreds in 1948. He then scored 716 runs against the same opposition including 3 hundreds in the home series in 1953. He was born in Simla, India, grew up in England and had very close ties with South Africa where he eventually passed away (in Cape Town) on Christmas this year. Robin Jackman played 4 Tests and 15 ODIs for England as a right-arm fast medium bowler. It was his first-class record which was outstanding - Jackman picked 1402 wickets in 399 matches at 22.8 apiece. He is best remembered though as a commentator covering cricket in South Africa. 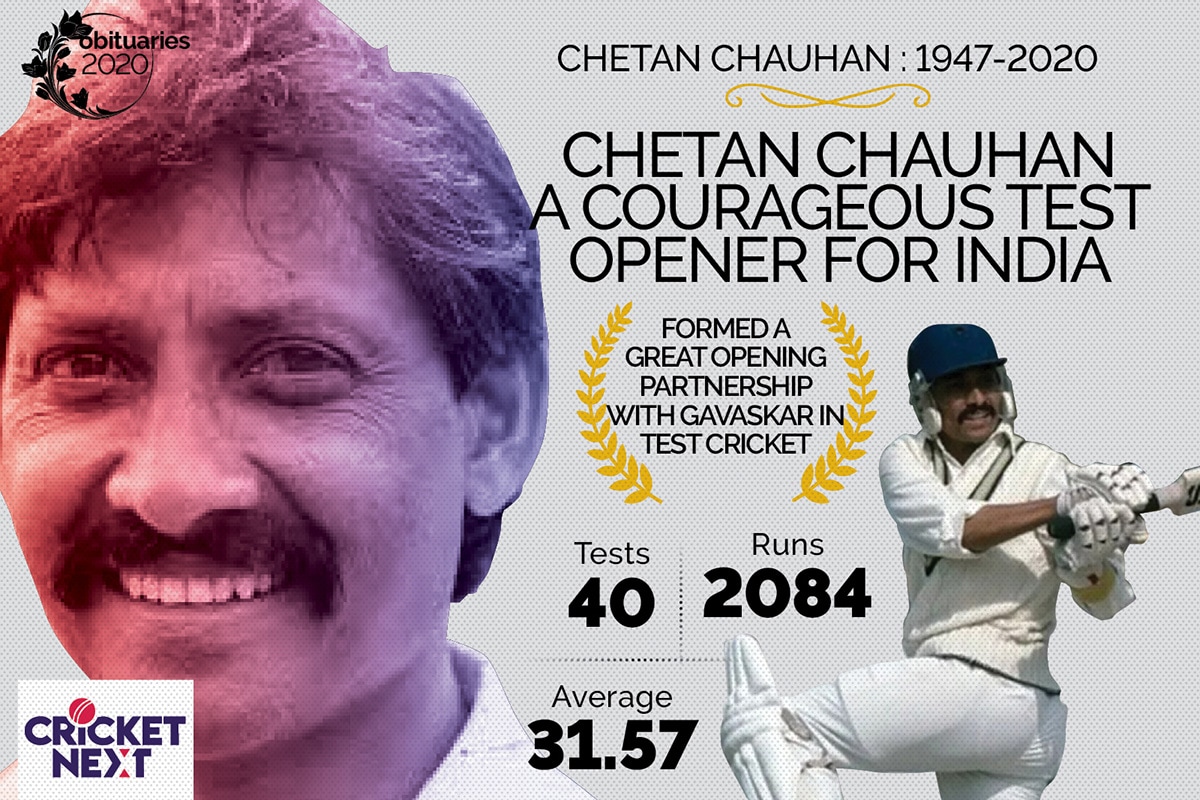 Chetan Chauhan played 40 Tests for India between 1969 and 1981 and scored 2084 runs at an average of 31.57 including 16 fifties. The gritty and courageous opener played some fine knocks for India overseas - 97 opening with Gavaskar when the top-order had failed against Australia in Adelaide in 1981, a more fluent 88 again against Australia at Perth in 1977, a match-winning 85 in the second innings at the MCG in 1981 and 80 in a double century opening-wicket partnership with Gavaskar at The Oval in 1979 when India chasing 438 fell agonizingly short at 429 for 8.

Chauhan paired up with Gavaskar to form one of the most successful opening partnerships in India's Test cricket history.

John Edrich was a gutsy and courageous left-handed opening batsman who represented England in 77 Tests between 1963 and 1976. Edrich had a fine Test record and aggregated 5138 runs at an average of 43.54 with 12 hundreds. He is best remembered for his unbeaten 310 in the innings victory over New Zealand at Leeds in 1965. Edrich had an excellent record against Australia in the Ashes - considered a benchmark for players from Australia and England. He scored 2644 runs in 32 matches at an average of 48.96 including 7 hundreds against the arch-rivals.

Slow left-arm orthodox bowler,, Rajinder Goel never got a chance to represent India in Test cricket but had a brilliant first-class record in which he took 750 wickets in 157 matches at an average of 18.58. He was widely regarded as the best bowler to have never played for India. Goel was a Ranji great and the leading wicket-taker in the history of India's premier domestic competition - he picked 637 wickets in the Ranji Trophy in 123 matches across 27 seasons from 1958-59 to 1984-85.

John Richard Reid was a splendid all-rounder from New Zealand who represented the country in 58 Tests from 1949 to 1965. Reid scored 3428 runs with 6 hundreds at an average of 33.28 and picked 85 wickets at 33.35. One of his most memorable performances came on the tour to India in 1955-56. He aggregated 493 runs in 5 Tests with hundreds in Delhi and Kolkata. Bapu Nadkarni was a fine bowling all-rounder who played 41 Tests for India between 1955 and 1968. A slow left-arm orthodox bowler, Nadkarni picked 88 wickets at an average of 29.07 and an economy rate of 1.67 - he was one of the most restrictive bowlers to play Test cricket. He also scored 1414 runs including a Test hundred and 7 fifties at an average of 25.7. He is best remembered for delivering 21 consecutive maiden overs in one of the most brilliant economical spells of bowling in Test cricket history - Nadkarni returned with figures of 32 overs, 27 maidens, 5 runs and 0 wickets against England in Chennai in 1964.