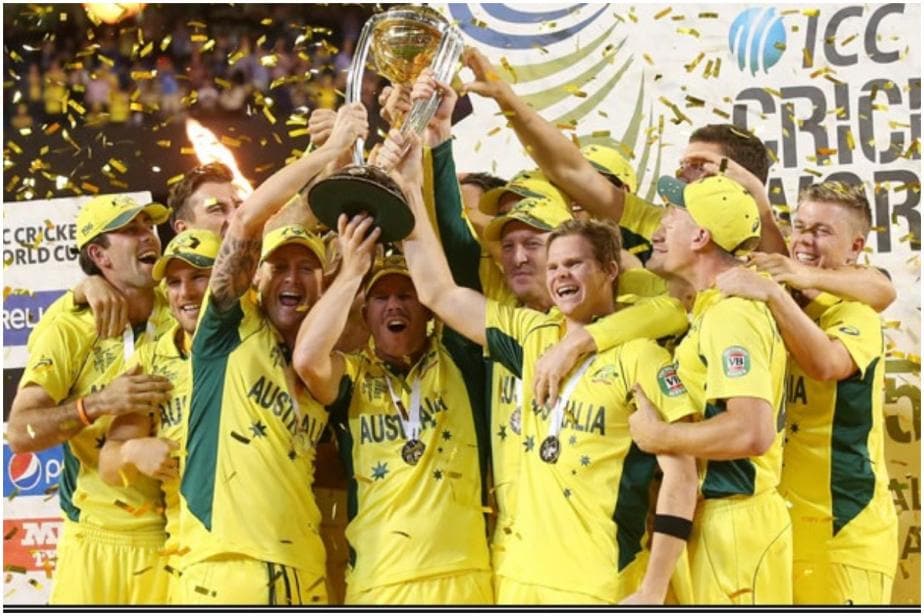 The Australian cricket team, which was led by Michael Clarke, won their fifth World Cup defeating New Zealand by 7 wickets in the finals at the MCG in 2015

On this day in 2015, the Australian cricket team beat neighbours New Zealand in an exciting final to win their record fifth Cricket World Cup title. Solid, consistent and committed, the Australian cricket team which was led by Michael Clarke won their fifth World Cup defeating New Zealand by 7 wickets in the finals at the MCG (Melbourne Cricket Ground). Coming into the finals, New Zealand were on a roll and their road to the 2015 World Cup performance was not short of heroic.

New Zealand had defeated South Africa in the semi-finals by 4 wickets (D/L) method and were unbeaten throughout the tournament, whereas Australia had beaten an unbeaten India side by 95 runs. Entering the finals of the World Cup, the clash was meant to be as Australia faced their New Zealand on the grandest stage of the sport.

93,013 spectators were in attendance at the MCG, a record crowd day in Australia. The Brendon McCullum-led New Zealand won the toss and opted to bat first in their very first World Cup final. The Kiwis had a strong line-up, however, it was the immense pressure which got them as they saw their skipper and opener, McCullum being bowled out by Mitchell Starc in the fifth ball of the match for a duck.

Following the skipper later was Martin Guptil (15) and the score read 38/2 in 12 overs played. Kane Williamson was next to walk back to the pavilion after scoring 12 runs after Mitchell Johnson got his number with a caught and bowled.

A dreadful start for New Zealand, the wickets kept tumbling. Ross Taylor managed to hang on and scored a helpful 40 before being dismissed by Faulkner. Other than Taylor, it was Grand Elliot who had stepped up and scored a heroic 83 before Faulkner once again claimed another wicket.

New Zealand were bowled out for 183 in 45 overs bowled. The Aussie attacking unit did a brilliant job to keep the Kiwis at bay as James Faulkner (3/36), Mitchell Johnson (3/30) and Mitchell Starc (2/20) bowled out the co-hosts for a measly 183.

With 184 on the board for Australia to chase, it was a no sweat. David Warner started off brightly before Aaron Finch was dismissed for 0 by Trent Boult. But that did not stop the carnage set by Warner (45) and Steve Smith (56). Adding to his last match as an Australian cricketer, Michael Clarke led from the front and scored a sublime 73 to help Australia beat New Zealand by 7 wickets and lift the Cricket World Cup.

It was an emotional win for Australia as Clarke had dedicated the World Cup victory to Phillip Hughes, who had passed away in 2014 after being struck by a bouncer. Other than Clarke, it was also the final matches for Brad Haddin, Mitchell Johnson and New Zealand’s Daniel Vettori.