The roots of the win were laid on Day 2 by Cheteshwar Pujara whose patience, perseverance, character and temperament gave India the ascendancy in the match. 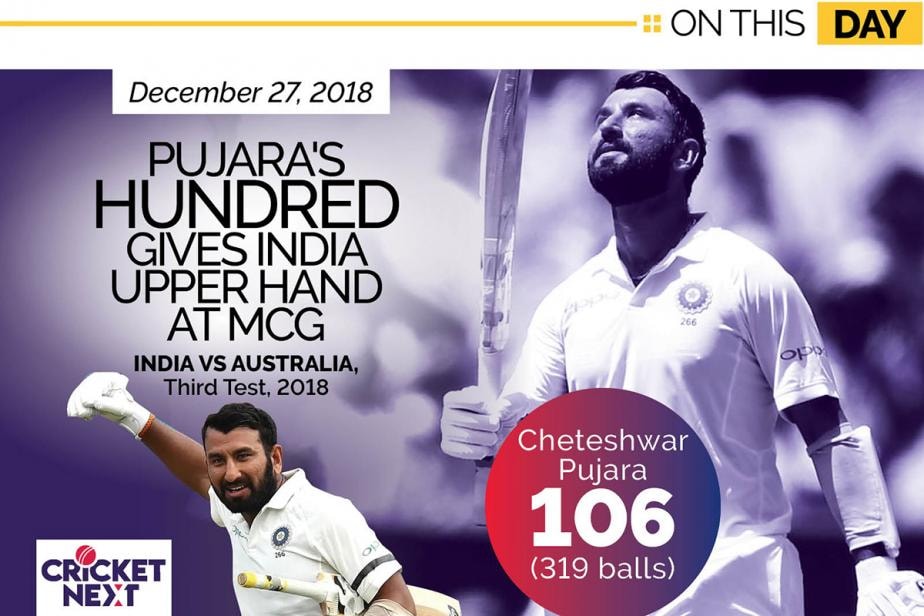 India vs Australia, Third Test, MCG, Day 2: The series was tied at 1-1 and the two teams were battling hard to gain supremacy in the big Boxing Day Test at the MCG. India, electing to bat first, had ended Day 1 at 215 for 2 with Cheteshwar Pujara unbeaten on a patient and dogged 68 and skipper, Virat Kohli undefeated on 47.

The Pujara-Kohli pair continued to fight on Day 2 and although runs were tough to come by, the duo, realising the importance of a big first innings total in Melbourne, were determined not to throw away their wickets. Pujara continued to do what he does best – play out time and overs frustrating the Australian attack of Pat Cummins, Josh Hazlewood and Mitchell Starc. He was solid in his defense and left well and was in for the long haul. He played out a number of dot deliveries knowing the importance of not losing a wicket in the morning session on Day 2.

And then close to Lunch, The New Wall of India drove Nathan Lyon past mid-off to register his 17th century in Test cricket. It was his second hundred of the series after his brilliant 123 in the series opener in Adelaide. Like in the first Test, Pujara had set India up for a big score in the first innings putting pressure on the Australian batting line-up.

The Kohli-Pujara duo put together a splendid match-defining partnership of 170 before Kohli fell for 82 to Mitchell Starc – India’s first wicket to fall on Day 2 at the score of 293. Pujara soon exited for 106 off 319 deliveries. He had spent an invaluable 481 minutes at the crease.

India’s middle order fired and they went on to put a massive 443 for 7 in the first innings. India went on to rout Australia for 151 and ultimately won the Test by 137 runs thereby taking a 2-1 lead in the four-match series. The last Test ended in a draw and thus MCG became the defining result of the series and gave India their first series win Down Under in history.

The roots of the win were laid on Day 2 by Cheteshwar Pujara whose patience, perseverance, character and temperament gave India the ascendancy in the match.