On This Day in 1980 in Mumbai Ian Botham produced the greatest all-round performance in Test cricket history against India in a one-off Test to mark the Golden Jubilee of the BCCI. Botham scored a majestic counter-attacking hundred under pressure and also returned with 13 wickets in the match. 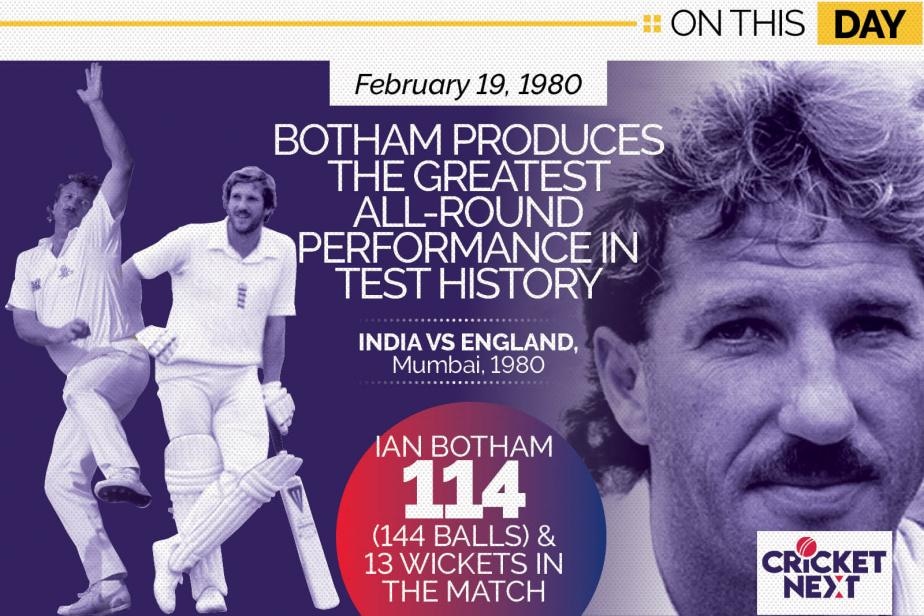 February 15-19, 1980: It was a one-off Test between hosts India and England at the Wankhede Stadium in Mumbai to mark the Golden Jubilee of the BCCI. Gundappa Viswanath won the toss and elected to bat first. Sunil Gavaskar and Roger Binny gave the team a solid start adding fifty for the opening wicket before the latter was run out. Dilip Vengsarkar and Gavaskar had taken the score to 102 before the great England all-rounder, Ian Botham struck and removed the Little Master. That opened the floodgates and India started losing wickets at regular intervals.

IPL Auction 2021: Arjun Tendulkar Thanks Mumbai Indians, Says Was Childhood Dream to Play for Them

Botham ran through the middle order getting rid of Sandeep Patil, Kapil Dev and

Yashpal Sharma amongst others. He returned with 6-58 in just under 23 overs as the home team were bowled out for 242. India fought back and reduced England to 58 for 5 before Botham and Bob Taylor added 171 for the sixth-wicket. Botham dominated the stand and scored a brilliant counter-attacking hundred. He hammered 114 off just 144 deliveries - an innings which included 17 fours - and powered England past the Indian total. The visitors posted 296.

India collapsed in the second innings as the great Botham bagged 7-48 in 26 overs. He dismissed Gavaskar, Binny, Viswanath, Patil, Sharma, Kirmani and Shivlal Yadav as the hosts were routed for 149 in just under 53 overs.

England went on to win by 10 wickets. Botham had produced the greatest all-round performance in Test cricket history. He became the first player to score a hundred and bag 10-plus wickets in the match. The feat has since been repeated only twice in Test cricket - Imran Khan scored 117 and picked 11 wickets against India in Faisalabad in 1983 and Shakib-Al-Hasan hit 137 and bagged 10 wickets against Zimbabwe at Khulna in 2014.

What stood out for Botham is the quality of his 13 wickets in the match - he got most of the top-middle order batsmen early in their innings and not only scored his hundred at a high rate but also under severe pressure with half his side in the pavilion with just 50 odd on the board. This showcased his phenomenal ability, talent, skill and temperament. ​