On This Day in Bengaluru in the 2011 World Cup, hosts India and England played out a thrilling tie with Sachin Tendulkar and Andrew Strauss registering splendid hundreds. It was only the fourth tie in World Cup cricket history! 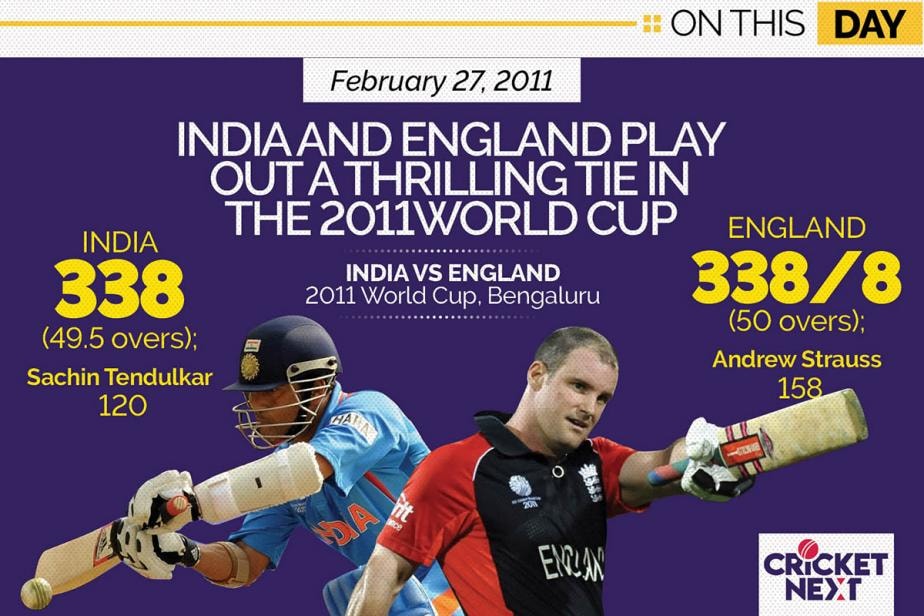 It was a big match between hosts India and England at the Chinnaswamy Stadium in Bengaluru in the 2011 World Cup. MS Dhoni won the toss and elected to bat first. Virender Sehwag gave India a fine start before being dismissed for 35 off 26 deliveries. It was the Sachin Tendulkar show thereafter. The Little Master put together 134 for the second-wicket with Gautam Gambhir during the course of which he registered his fifty off 66 deliveries.

India crossed the 200-mark after 34 overs and shortly after Tendulkar brought up yet another hundred in ODI cricket off just 103 deliveries. He had accelerated after getting his half century. Tendulkar was finally dismissed for a magnificent 120 off just 115 deliveries including 10 fours and 5 sixes. Yuvraj Singh scored a quick fifty and Dhoni chipped in with a few to take India to a massive 338.

However, the shorter boundaries and the heavy atmosphere due to Bengaluru’s altitude meant that the chase was on. Kevin Pietersen and Andrew Strauss gave England a great start adding 68 before the first powerplay was over. Strauss was playing a captain’s knock and leading the visitor’s chase anchoring the innings. He put together a match-changing 170-run stand for the third wicket with Ian Bell and took England to a commanding position before Zaheer Khan’s double blows turned the match on its head in the 43rd over.

Khan saw the back of Bell and Strauss (158 off 145 balls) off successive deliveries and then dismissed Paul Collingwood in his next over. Matt Prior was sent packing by Harbhajan Singh and England had collapsed to 289 for 6 in the 46th over. It boiled down to 29 runs off the last 2 overs with just three wickets in hand. Dhoni took a big gamble in giving the penultimate over to the leg break bowler, Piyush Chawla. It did not work as he was smashed for two sixes – one each by Graeme Swann and Tim Bresnan before the latter was dismissed off the last ball of the over. But the damage had been done. Chawla was taken for 15 in the over.

It was only the fourth tied match in a World Cup.