S Sreesanth was a very talented fast bowler who played for India in all the three formats between 2005 and 2011 before his career was cut short by spot-fixing allegations in the IPL. Sreesanth represented India in 27 Tests, 53 ODIs and 10 T20Is and gave a few fine performances with the ball. On his 38th birthday, we recall three of his finest performances in international cricket. 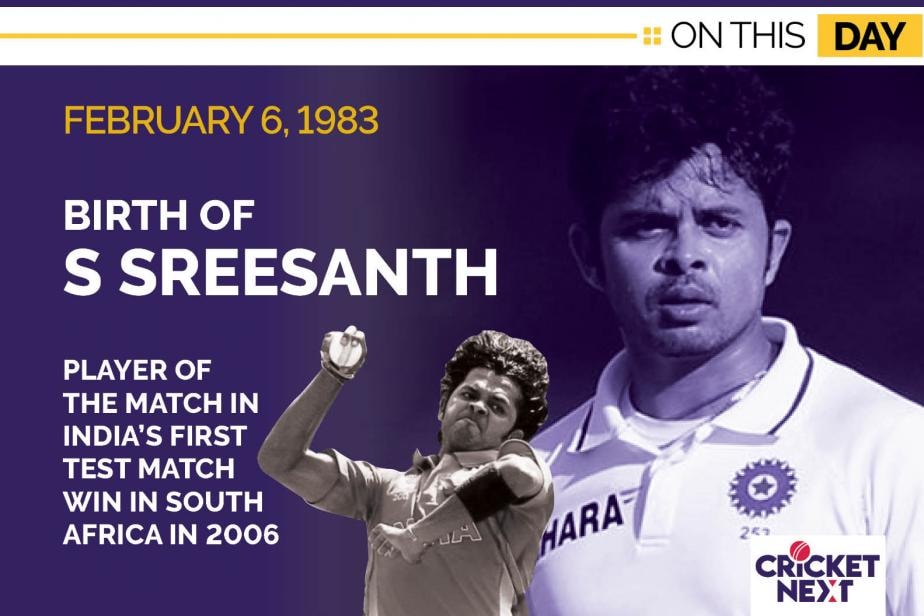 S Sreesanth was a very talented fast bowler who played for India in all the three formats between 2005 and 2011 before his career was cut short by spot-fixing allegations in the IPL. Sreesanth represented India in 27 Tests, 53 ODIs and 10 T20Is and gave a few fine performances with the ball. On his 38th birthday, we recall three of his finest performances in international cricket.

It was the series opener between India and South Africa at Johannesburg. India won the toss and elected to bat first. Decent contributions by the middle order led by a fifty from Sourav Ganguly helped the visitors post 249 on a difficult wicket. Sreesanth struck with the new ball getting the big wicket of skipper, Graeme Smith in the second over. He then dismissed the great Hashim Amla in the fourth over of the match to reduce South Africa to 5 for 3. Jacques Kallis - South Africa's Wall - was Sreesanth's third victim of the morning as he removed the great all-rounder for just 12 in the eighth over.

Sreesanth completed a fifer as he saw the back of Boucher and Pollock to leave the home team in tatters at 45 for 7. They were eventually bowled out for 84 - one of South Africa's lowest totals at home. India replied with 236 setting the hosts 402 for a win.

Sreesanth again broke the backbone of the top and middle order - he got the big wickets of Smith and Amla to reduce South Africa to 34 for 3. Kallis and Ashwell Prince had put together a fifty run stand and were leading the fightback for the home team before Sreesanth returned to get the wicket of the great all-rounder. South Africa did put up a fight but were dismissed for 278 handing India a famous 123 run victory. It was India's first win in South Africa. Sreesanth was adjudged the Player of the Match for his 8 wickets.

India vs England: Becoming a Dad The Greatest Moment in My Life, Incomparable to Cricket - Virat Kohli

The series was levelled at 0-0 with all to play for in the fourth and final Test at Sabina Park in Kingston, Jamaica. Rahul Dravid won the toss but India managed to score just 200 with the captain leading the way with a brilliant 81. India needed wickets with the new ball. Sreesanth was their man. He gave the hosts two huge blows with the red cherry - Sreesanth saw the back of the dangerous Chris Gayle in the very first over of the innings.

He then dismissed the great Brian Lara - captain of the West Indies - in the 11th over for 26. Harbhajan Singh took over and picked five as West Indies were routed for 103. Dravid again top-scored for India in the second innings with 68. Set 269 for victory, West Indies again lost Gayle in the first over of the innings - the left-hander was again the victim of Sreesanth. The Indian speedster gave the visitors their second breakthrough too getting rid of Darren Ganga in the 11th over.

Ramnaresh Sarwan and Dwayne Bravo resurrected the innings and put together 70 for the fifth wicket. India needed a wicket. Sreesanth again put up his hand and delivered. He got the massive wicket of Sarwan for 51 reducing the West Indies to 126 for 5. Anil Kumble ran through the rest of the line-up as the home team were bowled out for 219 giving India victory by 49 runs and a rare 1-0 series win in the Caribbean.

India had already won the seven-match ODI series against England but wanted to finish in style in Indore. Sreesanth gave the home team the first couple of breakthroughs dismissing Andrew Strauss and Matt Prior. He then returned at the death with England on the charge and stopped their juggernaut getting rid of Geraint Jones, Ian Blackwell, Liam Plunkett and Sajid Mahmood. The visitors were restricted to 288 when at one time 300-plus was very much on the cards.