Sachin Tendulkar's brilliant all-round effort helped India to a thumping victory against Pakistan in the first final of the Independence Cup in Dhaka in 1998. After picking three wickets the Indian genius scored a match-winning 95 off just 78 deliveries. 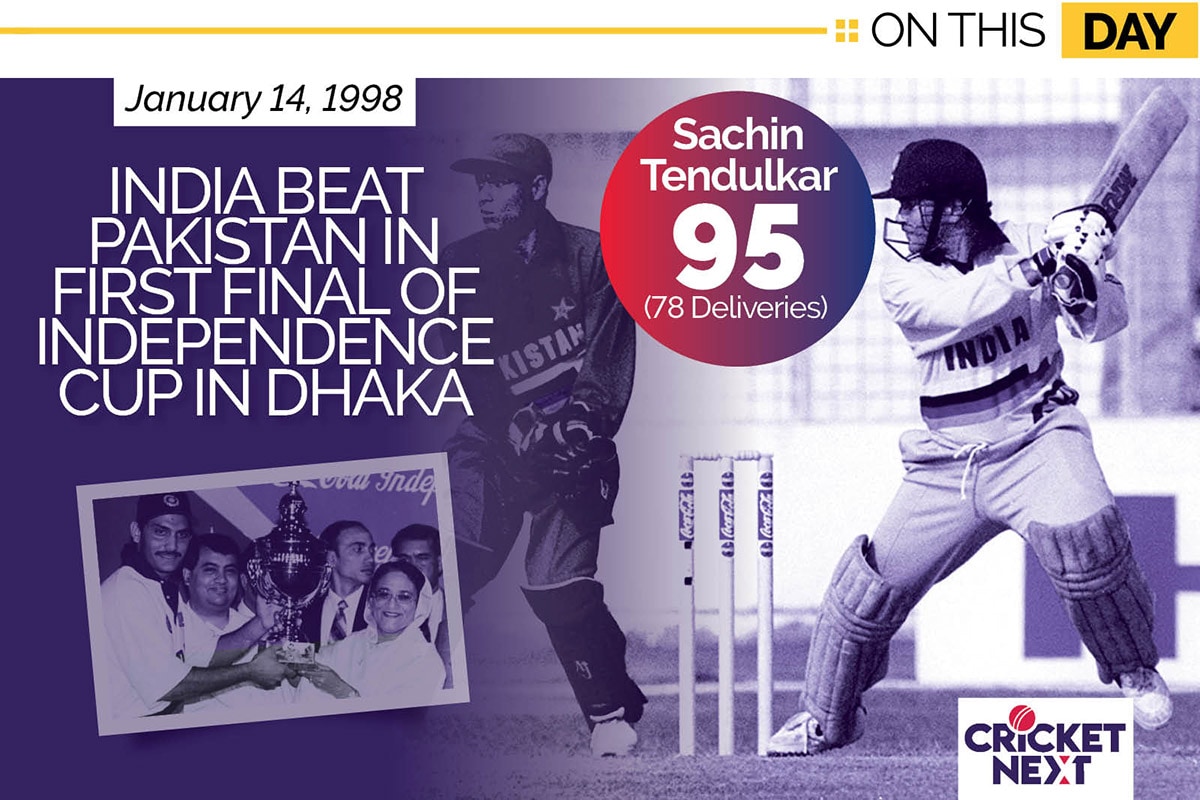 India was playing Pakistan in the first final of the Independence Cup in Dhaka in 1998. Mohammad Azharuddin was the captain of India while Pakistan was being led by Rashid Latif. Pakistan won the toss and elected to bat first. Saeed Anwar and Shahid Afridi gave them a good start adding 45 for the opening wicket before the maverick right-hander was dismissed by Harvinder Singh. Anwar continued the tempo and had taken the score to 73 with Aamer Sohail before Mohanty got the better of the latter for 10.

Sairaj Bahatule got the big wicket of Anwar in the 24th over. Pakistan were reduced to 95 for 3. Ijaz Ahmed and Inzamam-ul-Haq took control of the proceedings before the man with the golden arm for India, Sachin Tendulkar saw the back of both the great middle-order batsmen for Pakistan in successive overs. This was a huge blow for Pakistan and the turning point of the match. The innings lost whatever momentum they had built and was completely derailed. Azhar Mahmood chipped in with 30 before he was cleaned up by Javagal Srinath. Pakistan collapsed and could only put up 212 for 8 in their allotted 46 overs.

Tendulkar had changed the match on its head and returned with 3 wickets. Robin Singh was the most economical Indian bowler and conceded just 26 runs in his 9 overs. Srinath also bagged two wickets.

India came out all guns blazing with their star openers, Tendulkar and Sourav Ganguly putting together a match-winning partnership of 159 runs in just 25 overs. The rest of the match was just a formality. Ganguly was dismissed for 68 off 87 deliveries while Tendulkar just bettered his day with a magnificent 95 off 78 deliveries hammering 6 fours and 5 sixes. He ripped into the Pakistani bowlers hammering them all over the park in Dhaka. Tendulkar was at his peak across formats between 1996-1999 - Pakistan had the bad fortune of facing his wrath when at his best!

Skipper Mohammad Azharuddin remained unbeaten on 30 off 38 deliveries as India chased down the target in the 38th over with 8 wickets in hand. It was a crushing defeat for Pakistan. India's batting line-up was too strong against a potent Pakistani bowling unit comprising world class spinners like Mushtaq Ahmed and Saqlain Mushtaq.

Tendulkar's brilliant all-round effort earned him the Player of the Match award. He had won India the match with the ball and the bat. India took a 1-0 lead in the best of three finals.