Back to News18
Home » Cricket Home » News » On This Day in 2008, India Register Historic Test Win At Perth

On This Day in 2008, India Register Historic Test Win At Perth

India beat Australia by 72 runs to register a historic win at the W.A.C.A in Perth in 2008. They became and remain the first team from the sub-continent to beat Australia at the iconic ground in Perth. 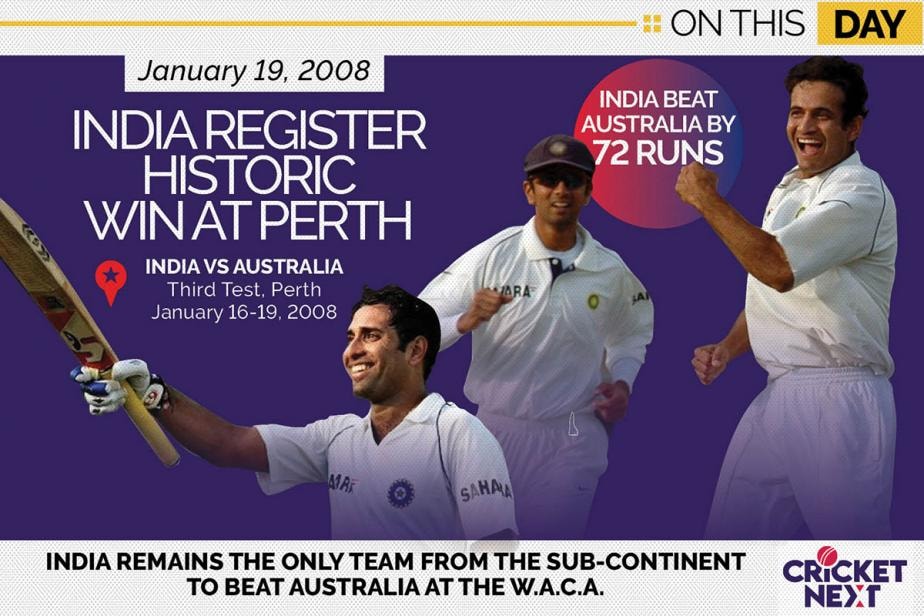 India had been beaten by big margins in the Boxing Day Test at the MCG and the New Year Test at the SCG. They were expected to be steamrolled on the treacherous wicket at the W.A.C.A.. Anil Kumble, the Indian captain won the toss and took the bold decision to bat first. The Indian openers, Virender Sehwag and Wasim Jaffer gave India a solid start putting together a half-century stand for the first wicket. Rahul Dravid and Sachin Tendulkar then stitched together a 139-run partnership for the third-wicket before the Little Master was dismissed by Brett Lee for 71. Dravid kept the innings together and top-scored for India with 93. The visitors scored 330 in the first innings.

Irfan Pathan saw the back of the Australian openers, Phil Jaques and Chris Rogers in the 4th over to give the home team a double jolt early in their innings. RP Singh sent Michael Hussey packing while Ishant Sharma got the huge wicket of the skipper, Ricky Ponting and Michael Clarke to reduce Australia to 61 for 5. But then a counter-attacking partnership of 102 between Andrew Symonds and Adam Gilchrist took Australia to 163 for 5 before Singh and Anil Kumble combined to take the last 5 wickets for just 49. Australia were bowled out for 212 giving India a massive lead in the first innings.

Attacking 40s from Sehwag and night watchman, Pathan gave India the impetus at the start of their second innings. But their famed middle-order - Dravid, Tendulkar and Sourav Ganguly - fell in quick succession without making a substantial contribution. India was in disarray at 125 for 5 when their crisis man, VVS Laxman combined with Pathan (partnership 35), Dhoni (partnership 75) and RP Singh (partnership 51) to take India to 294. Laxman was the last man dismissed - he scored 79.

Australia set 413 for a win, again lost both their openers before the completion of 10 overs - both to Pathan. Ponting, Hussey and the top-scorer Clarke (81) put up a fight but the top and middle order kept losing wickets at regular intervals. At 253 for 8 with the fall of Clarke, it looked game, set and match for India but Mitchell Johnson and Stuart Clark put together 73 for the 9th wicket giving India a minor scare. Pathan broke the partnership with the score at 326 while Singh wrapped up a great win for India by cleaning up Shaun Tait. The match ended in 4 days.

Irfan Pathan was the Player of the Match for his all-round performance. India had beaten Australia at the W.A.C.A. by 72 runs and became (and remain so) the first team from the sub-continent to achieve the feat!