Back to News18
Home » Cricket Home » News » On This Day, January 20 1980 - India Register Their Second Series Win Against Pakistan

On This Day, January 20 1980 - India Register Their Second Series Win Against Pakistan

On this day in 1980, India beat Pakistan by 10 wickets in the fifth Test in Chennai to take an unassailable 2-0 lead in the six-match series. 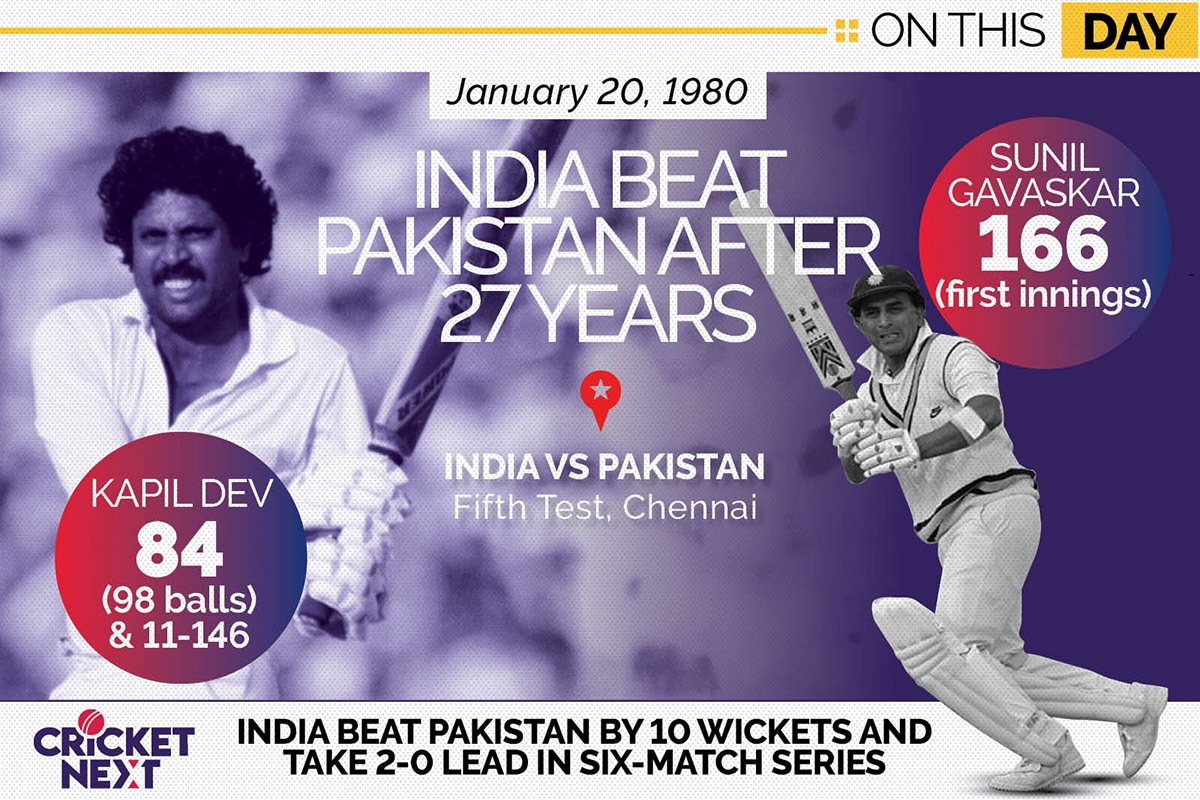 The first two Tests were drawn in Bengaluru and Delhi. A brilliant team-effort with contributions from the bat from Dilip Vengsarkar, Gundappa Viswanath, Syed Kirmani and Kapil Dev and some fine all-round bowling from Dilip Doshi, Karsan Ghavri, Roger Binny and Shivlal Yadav helped India beat arch-rivals Pakistan by 131 runs in the third Test in Mumbai. The fourth Test in Kanpur also ended in a draw.

India vs Australia: From The Eden Gardens to The Gabba - India's Finest Test Wins

Asif Iqbal won the won and elected to bat first in the fifth Test in Chennai. A number of the Pakistani batsmen got starts but failed to convert them into a substantial score. Majid Khan top-scored with 56 but the visitors were bowled out for 272. Kapil Dev picked up 4 wickets while Karsan Ghavri returned with 3. India's skipper, Sunil Gavaskar, then produced a special hundred registering 166 opening the innings for his country. Even as wickets kept falling at the other end, Gavaskar was resolute and defiant at the other. He forged a match-changing 105-run partnership with Yashpal Sharma for the fifth wicket before another crucial 60-run stand for the seventh wicket with Kapil Dev.

Gavaskar was finally dismissed after facing 373 deliveries and spending 593 minutes at the crease. Kapil Dev hammered 84 off 98 deliveries and with good support from Binny (42 not out off 45 deliveries) propelled India to a massive 430 in the first innings. Imran Khan picked 5 wickets in the innings for Pakistan.

Kapil then produced a splendid display with the ball running through the Pakistani top and middle order. He saw the back of Sadiq Mohammad, Mudassar Nazar and the great Zaheer Abbas to leave Pakistan reeling at 33 for 3. Ghavri dismissed Majid Khan while Kapil returned to get Asif Iqbal to leave the opposition in tatters at 58 for 5. There was some sort of resistance from Javed Miandad and Wasim Raja but it was a case of too little too late. Pakistan were bowled out for 233 and Kapil returned with fine figures of 7-56 in 23.4 overs.

India chased down the target of 76 in 18 overs with all their 10 wickets intact. Gavaskar remained unbeaten on 29 while Chetan Chauhan was undefeated on 46.

India had taken an unassailable 2-0 lead in the six-match series. It was their first series win over Pakistan in 27 years - after their maiden triumph in 1952. The two legends of Indian cricket - Sunil Gavaskar and Kapil Dev - were their heroes.