On This Day, November 29 1977: Birth of Younis Khan - Pakistan's Highest Run-Getter in Tests 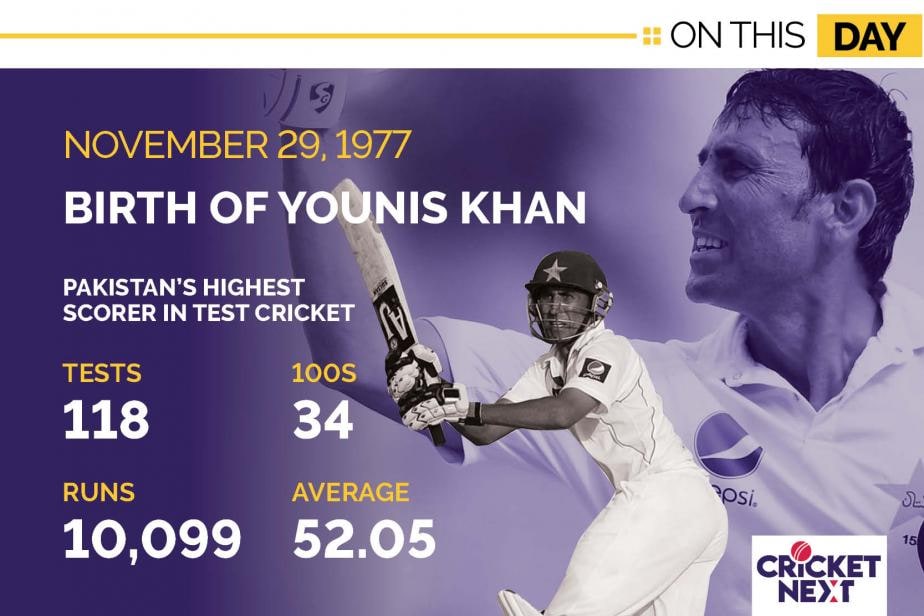 Younis Khan's name seldom features in a list of all-time greats from the subcontinent. On his 43rd birthday, we look at 5 numbers which stand out from his glorious Test career.

Younis Khan's name seldom features in a list of all-time greats from the subcontinent. Such a list would include the likes of Tendulkar, Sehwag, Gavaskar, Dravid, Kohli, Sangakkara, Jayawardene, Inzamam and Miandad. Yet, if one analyzes his numbers closely, Younis rightfully deserves a place amongst the pantheon of all-time Test greats and is one of the highest impact batsmen in the history of Test cricket!

On his 43rd birthday, we look at 5 numbers which stand out from his glorious Test career.

Younis is tied at number 6 with Gavaskar, Jayawardene and Lara on the hundreds' count. The five who have scored more centuries are Tendulkar, Kallis, Ponting, Sangakkara and Dravid.

52.05: The Seventh-Highest Average for a Batsman from the Sub-Continent

Younis Khan is one amongst an exclusive list of 8 batsmen from the Sub-Continent who average above 50 - Sangakkara, Tendulkar, Kohli, Miandad, Dravid, Mohammad Yousuf, Younis Khan, Gavaskar.

6: Number of Series-Defining Performances by Younis Khan in his Test Career

Younis Khan produced 6 series-defining (SD) performances in his Test career. An SD is a high impact and defining performance in a Test that decides the result of a series either leading to a win or helping draw level the series from behind.

Incredibly, 5 of these 6 SDs came overseas. His brilliant 218 off just 308 deliveries against England at THE OVAL in 2016 helped Pakistan draw level the four-match series at 2-2 and go to the number 1 ranking in Test cricket.

74.39: The Fifth-Highest Average in Victorious Matches in Test History

Younis Khan was a big match-winner for Pakistan whose performances were invaluable to the success of the team. His average in wins of 74.39 is the 5th highest (min. 2000 runs in wins) in the history of Test cricket only after Don Bradman, Steven Smith, Inzamam and Gary Sobers. That is some 'Famous Five' to be a part of!

50.51: Younis Khan's Average in the 4th Innings in Test Cricket

Younis scored 1465 runs in 40 fourth-innings in Test cricket at an average of 50.51 - it is the 4th highest average in the 4th innings (min. 500 runs) for a batsman from the sub-continent after Gavaskar, Miandad and Kusal Mendis.