Back to News18
Home » Cricket Home » News » Pakistan vs Australia 3rd T20I in Dubai, Highlights: As it Happened

Pakistan vs Australia 3rd T20I in Dubai, Highlights: As it Happened

Catch all the action, live cricket score and ball-by-ball updates through our CricketNext live blog on cricketnext.com.

Alright, Pakistan take the biscuit! That's it from us, goodbye!

Pakistan captain Sarfraz Ahmed - Credit goes to the entire unit. We outclassed them in every department. In this format, you just can't relax. We always try to keep the momentum going. The openers set it up for us and then the bowlers did well. Credit to all the bowlers. Hasan bowled well throughout the series. Usman got his chance today and did well and Shadab pocketed the Man of the Match today. We want to keep winning. Special mention to Shoaib Malik for his splendid catches. Hafeez has also done well for us. All the seniors are contributing really well for us.  We will look to do the same against New Zealand.

Australian skipper Aaron Finch - I think we had a chance in all three matches. Throughout the series, we lacked partnerships. They are a very good fielding side. Every time you give them soft wickets, it is devastating. Our bowlers did well. We are playing South Africa, India and Sri Lanka next. It's going to be tough.

Man of the Series Babar Azam - I feel I batted the best today. I changed my approach and tried a few shots. When you are in form, score as many as you can. I try to keep my focus and perform in every match. My role in every game is to bat through.

Man of the Match Shadab Khan - I bowled better lines and lengths today. It didn't grip too much but it skidded a lot today. Rather, it was spinning more in the last game. I plan according to a particular batsman.

This is the second time Australia have been whitewashed in the three-match T20I series. The first time it was against India in 2016. After Babar Azam (50), Sahibzada Farhan (39) and Mohammad Hafeez (32*) led Pakistan to 150 for 5 in 20 overs, their bowlers bundled Australia out for 117 in 19.1 overs. While Shadab Khan scalped three wickets, Hasan Ali picked up two wickets to clean up the tail. Pakistan still haven't lost a T20I series under the leadership of Sarfraz Ahmed. Meanwhile, Australia will have to end their UAE tour without a win to their name.

All over! They are the top-ranked side in this format and that's exactly how they played in this series. Hasan Ali gets the final wicket of Zampa. This is the first time Pakistan have whitewashed Australia.

Both Zampa and Tye are throwing their bat at every delivery but have failed to get proper wood. In the process, Tye edged one to the keeper who had to dive to his left to complete the catch. Hasan Ali gets his first wicket and Australia are nine down.

Make it eight! NCN bunted this one towards the off-side and took off for a single. He got a yes from Tye and went hard for a single. Tye, however, changed his mind and turned back. NCN didn't have enough time to get back to the crease and all Shadab had to do was to run towards the wicket and remove the bails. It's all over for Australia!

This man can't be 36! What a catch from Malik! He has to run to his left and complete a low catch. This match is all over unless something extraordinary happens. Australia have lost seven wickets.

Wait for a second! Short is still there and sweeps Shadab for a boundary towards the deep square leg. The onus is now on him to take Australia to victory. Nathan Coulter-Nile is someone who can play big shots but it's not going to be easy against in-form Pakistani bowlers. 52 needed in 30 deliveries.

Shadab Khan gets his third victim and the victim is Mitchell Marsh. The right-hander was getting edgy and chipped one straight to Malik at long on. It was a nothing shot from the all-rounder.

Hasan Ali is mixing his length and pace beautifully. He managed to outfox Short with a couple of slower deliveries and then followed it up with two back of a length deliveries. Just two runs from the over. Australia need 59 in 36.

Mitchell Marsh finally gets into the attack, comes down the track and smacks a six over the head of Hafeez. Australia will need these two to carry on if they want to avoid the whitewash. Despite a six, they could only manage nine runs from the over. Australia need 61 runs in 42 balls.

Tidy over from Shinwari! He is hitting the deck hard and hasn't given any width to both the batsmen. Australia haven't hit a boundary in the last 33 delivery and they now need 70 runs in 48 deliveries.

Oh okay! There was no need for that, Mr. Maxwell! The dasher tries to hit Shadab's flighted delivery out of the park but holds out at long on. It was a no-brainer from Maxwell! 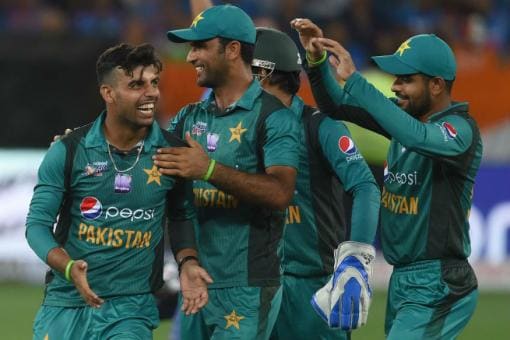 LATEST UPDATE: This is the second time Australia have been whitewashed in the three-match T20I series. The first time it was against India in 2016. After Babar Azam (50), Sahibzada Farhan (39) and Mohammad Hafeez (32*) led Pakistan to 150 for 5 in 20 overs, their bowlers bundled Australia out for 117 in 19.1 overs. While Shadab Khan scalped three wickets, Hasan Ali picked up two wickets to clean up the tail. Pakistan still haven't lost a T20I series under the leadership of Sarfraz Ahmed. Meanwhile, Australia will have to end their UAE tour without a win to their name.

PREVIEW: High on confidence after two clinical wins in as many games, Pakistan will be keen on completing a series sweep when they face Australia in the third and final Twenty20 International at the Dubai International Stadium on Sunday. After the 'car crash' in the first outing in Abu Dhabi where they bowled out for 89 chasing 156, Australia were a lot better in the second as they ran the hosts close but it wasn't enough to avoid Pakistan from clinching another T20I series win - their 10th successive in the shortest format of the game. While the bowlers have done a good job, it is the batting that has let Australia down massively. D'Arcy Short, Aaron Finch and Chris Lynn could only manage 12 runs between them and while Mitchell Marsh did spend some time in the middle, a 23-ball 21 in a run chase wasn't ideal as the visitors found themselves tottering at 73/6 facing yet another sub-100 score. That they got close to the Pakistan total was down to Glenn Maxwell's 37-ball 52. Coming in at No.5, he kept Australia in the game all through falling in the last over of the chase with the side needing 23 runs to win.

Things haven't quite gone Australia's way on the tour to UAE since they miraculously saved the first Test in Dubai. As they find themselves facing the prospect of a 3-0 whitewash, the Finch-led unit will desperately hope for their batsmen to good come the third T20I. For starters, the misfiring top-order will need to get their act together. Finch, Short and Lynn are all big names in the T20 circuit but have just not been able to get themselves in. Batting second both times has also not helped but knowing a lot rests on their shoulders they just can't afford to have off days. Marsh too might want to show off some of his big-hitting prowess while Alex Carey's scores of 1 & 1 so far in the series is definitely a point of concern. Amidst all the batting woes Maxwell's return to form might have given some relief to Australia's pains but he will need somebody to stand up with him if the visitors are to avoid a series sweep. The bowling though has been top notch by the Australians. They have restricted the hosts to a par total both times with Billy Stanlake, Andrew Tye and Nathan Coulter-Nile all doing their bit. Leg-spinner Adam Zampa hasn't been amongst the wickets but has kept the runs down in both games. Coulter-Nile has also been impressive with the bat, and that bodes well for Australia. Now for the rest of the batsmen to show the same discipline.

Pakistan, on the other hand, have most boxes ticked. They are the No.1 side in the T20I format and they have played like one. The biggest plus for them in this series has been Imad Wasim's exceptional comeback. The left-arm spinner who predominantly bowls in the Power Play has been a revelation so far. He celebrated his return to international cricket after almost a year in the first game picking up 3/20 and then backed it up with another clinical show in the second T20I returning stunning figures of 4-1-8-1. The likes of Faheem Ashraf, Hasan Ali, Shaheen Shah Afridi and Shadab Khan have all done exceedingly well and have at no stage allowed Australia to get a hold of the game. Even while Maxwell was going hammer and tongs the other day, none of the Pakistani bowlers panicked making sure they did not err in length. The batting, however, has been a bit of a concern for the Sarfraz Ahmed-led unit. While Babar Azam and Mohammad Hafeez have made major contributions in both games none of the other batsmen have found any form whatsoever. If Australia can get the duo out early, they can harbour hopes of restricting Pakistan to an even lesser total. It will be down to the experienced hands in Shoaib Malik and Ahmed to guide the middle-order should the top-order fail to fire. It is expected to be yet another hot and dry day in Dubai on Sunday though some showers are predicted. The surface is expected to take turn from the outset and the quicks too will get assistance owing to the two-paced nature of the Dubai pitch.