SRH beat PBKS by Nine Wickets: Jonny Bairstow hits fifty as Sunrisers Hyderabad end their run of three straight defeats and post first win of the season with an all-round show against Punjab Kings in Chepauk. They have reached the target of 121 in 18.4 overs for the loss of just one wicket. KL Rahul won the toss and opted to bat first but his batters failed to show up with Mayank Agarwal and Shahrukh Khan registering the top-scores for them - 22 runs each. They kept losing wickets regularly and eventually folded for just 120 in 19.4 overs, In reply, Bairstow and David Warner provided a strong start to Hyderabad with the pair adding 73 runs before being separated. Warner fell for run-a-ball 37. However, Bairstow was immovable and survived a late chance but by then the final result was a mera formality. He remained unbeaten on 63 while Kane Williamson scored a solid 16 off 19.

FIFTY for Jonny Bairstow: With a four to deep midwicket off Deepak Hooda, Bairstow reaches his 7th IPL half-century. Took 48 deliveries to the milestone and has so far struck three fours and two sixes.

IPL 2021 Live Score: Arshdeep Singh has been brought back into the attack now. And there was a difficult chance to dismiss Kane Williamson when he slapped one towards covers where a flying Henriques made a valiant attempt but the ball popped out of his hands. Five singles from the over take SRH to 100/1 in 16 overs.

Five overs remaining in the chase now but SRH are in a comfortable position. Thet are 95/1 and need 26 runs in 30 balls with nine wickets remaining.

So the second and final strategic time-out of the chase underway now. Sunrisers need just 30 more to win in Chennai

IPL Live Score: Jonny Bairstow has been joined by Kane Williamson who is playing his first match of the season after being declared fully fit. The New Zealand captain provides a much needed depth and a claming presence in the batting line-up. Meanwhile, SRH are looking in complete control of the chase and look set for their first win of the season. Bairstow is batting on 39 off 36 while Williamson is on 7 off 5. Score 87/1 in 13 overs, chasing 121

HYD vs PUN Live Score: OUT! Punjab finally have a breakthrough with Fabian Allen getting the prized scalp of SRH captain David Warner on 37. This one turned in and Warner pulled it to the right of deep mid-wicket where Mayank Agarwal completed a decent catch. He is pumped up, But is it too little too late for PBKS now? Punjab 731/ in 10.1 overs

IPL 2021 Live Score, PBKS vs SRH: David Warner puts on his dancing shoes and launches one from Deepak Hooda over extra cover for his first six of the innings. Nine runs from the over as Sunrisers reached 73/0 in 10 overs, chasing 121

Spin from both the ends now: KL Rahul brings in off-break bowler Deepak Hooda into the attack now. Two runs off his first one followed by five dot deliveries. SRH 58/0 in 8 eight overs, chasing 121

PBKS vs SRH Live: So play gets underway after a brief interval. The fielding restrictions have been lifted. Murugan Ashwin is into the attack. He starts well with six runs off it. But the target is not very challenging and Punjab need to take wickets and in heaps. Score 56/0 in 7 overs, chasing 121

50 up for Sunrisers Hyderabad vs Punjab Kings: Time for the first strategic break of the SRH innings with the Powerplay coming to an end. This has been an excellent start from Jonny Bairstow and David Warner in chase of 121. The duo has hadded 50 runs so far in 6 overs. SRH now need 71 runs in 84 deliveries with all wickets intact.

Over 5: Now Moises Henriques into the attack. And he drops short to Jonny Bairstow who accepts the gift with both hands  - a pull over long leg for a maximum. A good comeback from the Australian though as his next three are dot balls. Seven runs from the over. Just one over remaining in the Powerplay now with SRH 40/0

IPL Live: Now Arshdeep Singh into the attack. Six runs from the left-arm pacer's first over. SRH 33/0 in 4 overs. chasing 121.

PBKS vs SRH Live Updates: SRH are off to a fine start in Chennai unlike SRH. Two more boundaries to their total - one each to Jonny Bairstow and David Warner off Mohammed Shami. 10 runs from the over. SRH 27/0 in 3 overs, chasing 121

IPL Live Score And Updates: Fabian Allen creamed for a four and six by Jonny Bairstow in his first IPL over. Allen began with a wide following which Bairstow sent one rolling through the off-side for a four. He then finished the over with an 81-metre six towards mid-on. 11 runs from the over. SRH 17/0 in 2 overs, chasing 121

IPL 2021 PBKS vs SRH Live Updates: Shami's first over results in six runs including a boundary from David Warner after the SRH captain crashed one over point. SRH 6/0 in 1 over

So can Punjab Kings make a match out of this? Mohammed Shami has been handed the new ball. Jonny Bairstow and David Warner will kickstart SRH's chase of 121. Here we go.

PBKS vs SRH Live Score: Mohammed Shami is the last wicket to fall - run out on 3 - as Punjab Kings have folded for 120 in 19.4 overs. Their innings never took off as Sunrisers Hyderabad kept hitting them regularly and never allowing easy runs. Khaleel Ahmed took 3/21 while Abhishek Sharma chipped in with 2/24 for SRH. For PBKS, Shahrukh Khan and Mayank Agarwal scored 22 each while six batters didn't touch double digits.

PBKS vs SRH, Over 20 Live Update: OUT! Murugan Ashwin departs. Siddharth Kaul finally gets a wicket with Ashwin edging one to be out caught behind on 9 off 10. PBKS 114/9 in 19.1 overs, Arshdeep walks in at No. 11

So just four runs and a wicket in the 19th over. PBKS will want to milk the final six deliveries as much as possible. But can they? 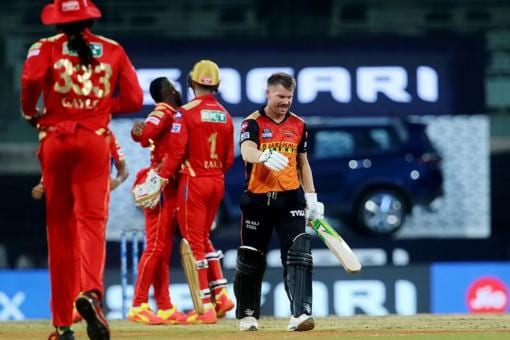 PBKS vs SRH Live Score, IPL 2021, Today’s Match Latest Updates: So Sunrisers Hyderabad have finally posted a win in the season after a horror start that saw them losing three straight games. They have put up an all-round show against Punjab Kings to win by nine wickets and will hope this results in a turnaround.

Punjab Kings started with a bang posting a big 200-run total and getting the better of an assault by Sanju Samson before their bowling let them down against the Delhi Capitals. The batting collapsed against the swing of Deepak Chahar against CSK.

PBKS have a few problems to address. Firstly, KL Rahul needs to play the role of the aggressor at the top of the order – like he did with his 91 off 50 deliveries against the Royals. He settled down into anchoring the innings (61 off 51 balls) against the Capitals while Mayank Agarwal was blazing at the other end – almost deliberately as if it is a crime for both the openers to go after the bowling in the powerplay. Here, the PBKS skipper has to learn from the opening pair of the Capitals – both Shikhar Dhawan and Prithvi Shaw went ballistic in the powerplay which set up the chase for their franchise.

SRH have had one of their worst starts in the IPL this season. They should have won their matches against RCB and Mumbai Indians but crumbled under pressure at the death. The team is heavily dependent on their top-order – namely on the trio of David Warner, Jonny Bairstow and Manish Pandey. They have badly missed the services of Kane Williamson in the middle order.

The likes of Mohammad Nabi, Vijay Shankar, Jason Holder, Abdul Samad and Abhishek Sharma have not come up with substantial performances or the match-defining cameos in the lower order. They have 7 failures in 9 innings between them in the tournament thus far.